When Three Busy Debras, a short-form comedy that premiered last night on Adult Swim, was only a humble sold-out weekly live show at The Annoyance Theater in Brooklyn, its three creators were haunted by a smell. The Annoyance was a grubby basement space, with a down-for-anything atmosphere. “We were like, This theater has a fucking smell,” Sandy Honig says. “What is going on? They need to check themselves. Then we come to find out, the smell was us.”

Sandy Honig, Mitra Jouhari, and Alyssa Stonoha hard boiled eggs for each week’s show, peeling them on stage, and finally eating them. Little pieces of egg and shell littered into their bucket of props. It was summer, July and August in New York, in a dank basement. The eggs turned into something more sinister. “The smell was coming from inside the Debra,” Honig says. They had to throw all their props out. “It was kind of an amazing day,” Jouhari says, “just throwing out material and screaming and crying and retching in the street.”

Related | SNL’s Ego Nwodim on Doing Her ‘Residency in Comedy’

With misty eyes, the three credit the now-closed Annoyance for giving them the space to refine their voices. Adapted for TV in six 15-minute episodes, each actor plays her own crazy-eyed woman of leisure and absurdity, each named Debra. To develop the show, they moved to Los Angeles, where we meet at an overfull cafe and the three share a single chocolate croissant as they wait for coffees. A few weeks before the COVID-19 outbreak reached the West Coast, I shake their hands, and they begin to shake hands with each other, too. They seem relieved to see one other, as though it’s been a while. But I’m suspicious and when I ask, they confirm that it’s only been two and a half days. That’s a long time if they’re not traveling. “We have all the same friends,” Jouhari says. I ask what their work-life Venn Diagram looks. “Circle,” Stonoha says. “Three circles on top of each other,” Honig suggests. 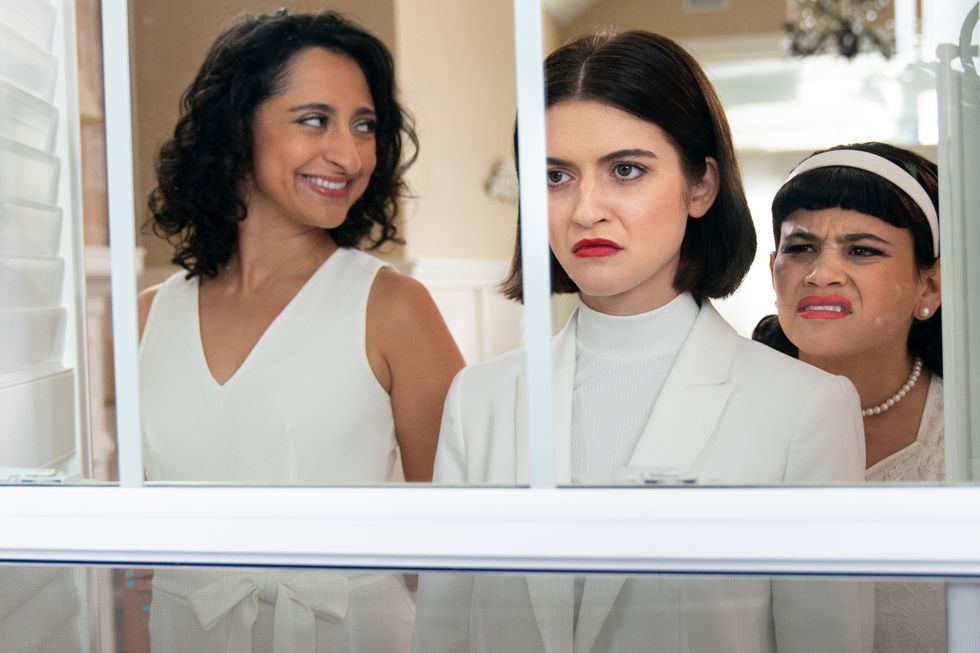 It was scheduling hitches that inspired Three Busy Debras in the first place. The three were aware of each other within their cozy New York comedy scene and had met in pairs at parties. They gathered for the first time on February 8, 2015, which Honig remembers because it’s her mother’s birthday. It took them weeks to arrange that first hang, because their calendars were so mismatched. On the group thread, they couldn’t stop talking about how busy they were. “We were all embarrassed we couldn’t find a time to meet,” Stonoha says. When they finally got dinner and performed an improv show, they created a set where each character was named Debra and was very busy.

This was all so much fun that they decided to do it again. The only time they could meet was late, so writing sessions took place at all-night diners from 11 PM to 1 AM — Waverly Restaurant, Odessa and Malibu. The show is built on this 1 AM absurdity and tired transcribing typos that ended up being funnier than the original thing (“the concept of an egg”). A 10 minute script turned into a half hour play that ran for six months at The Annoyance and then moved to Los Angeles. The play had lots of visual ideas that they couldn’t execute, like two women squishing a pool boy between their cars, so a TV script felt newly logical. In the play the joke was that they couldn’t do it, now the joke is that they can— they’ve been given permission. The show retains a lot of the strange spontaneity of the theater performance, as well as a lot of eggs.

On TV, the three Debras are living their daily pointless lives, with notably absent partners and a pervasive sinister energy. The three Debras only wear white. All their spaces are way too big, which gives the show an afterworld quality. They had to wear robes and bibs to protect their costumes. “We were all very dirty, we all had our period every day,” Jouhari says. “The most stressful part of doing the show is not spilling.” 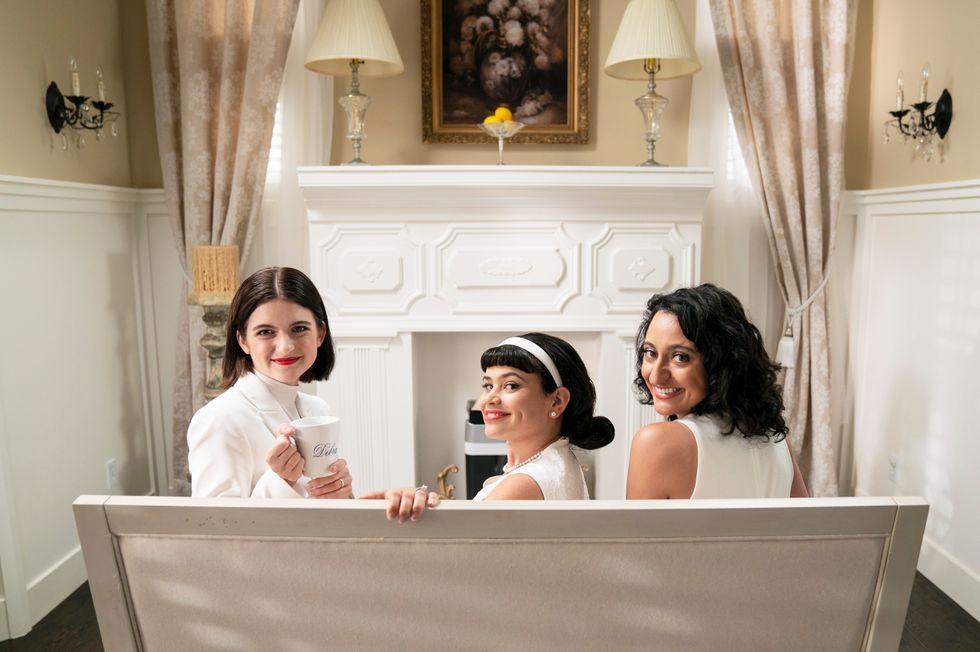 That’s the show’s slipstream strangeness — perfection so gleaming that you immediately notice that something’s out of place, but can’t quite figure out what it is. You’re constant scanning an aestheticized ugliness, in the model of Toiletpaper magazine and Alex Pregar.

The show pokes at many sticky topics — especially around social expectations and class — but its most effective critiques are about friendship. There’s a particularly haunting sleepover episode that crystalized the feeling of being trapped and asked to perform intimacy. It’s a claustrophobia I recognized but had never categorized.

What does “busy” mean? “That you’re not doing anything,” Stonoha says. “You’re lying to people who are close to you or not, to make yourself that much more important and to make them feel less of a priority.” “I have stuff to do, I am wanted, my life has value,” adds Jouhari in the voice of her Debra. “It’s also inventing tasks for yourself, outwardly to the others, and to yourself,” says Honig. “To prevent yourself from looking inward you get a lot of stuff to do,” Jouhari says. 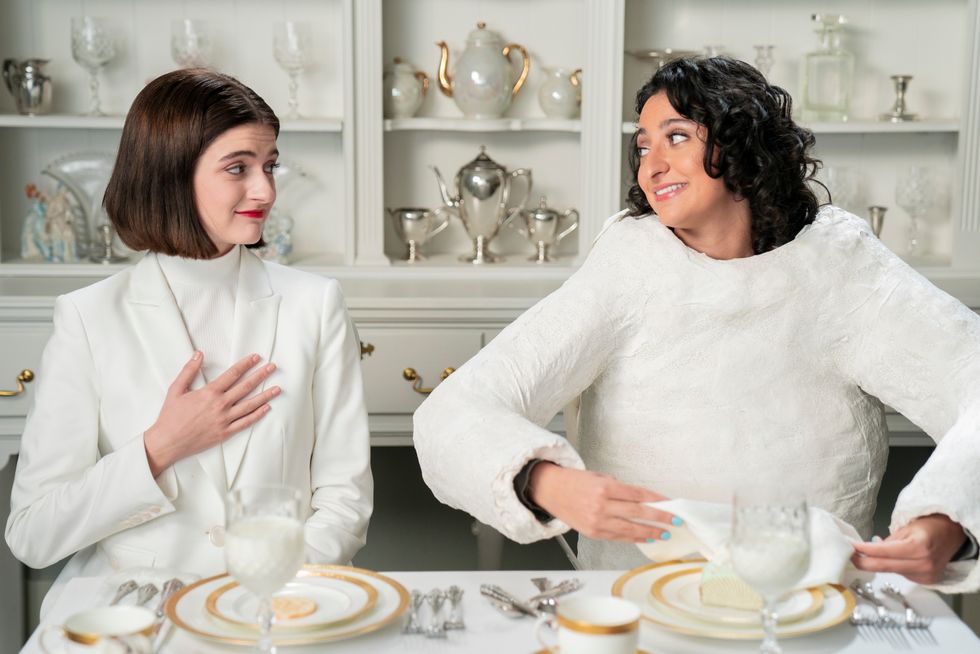 They’ve captured the competitive social arms race so well, but in person the trio is a picture of collaborative friendship. Their clothes are relaxed, chic and cozy: black turtleneck and round clear glasses, slouchy color block stripes with a black scrunchie, a long sleeve t-shirt with Bernie winning an election in the 1980s. Honig is wildly worried that her friend’s order has been forgotten. “Don’t talk to me until Mitra’s had her coffee,” she says. And no one’s all-out decked in pristine white, so we don’t have to worry about spills.