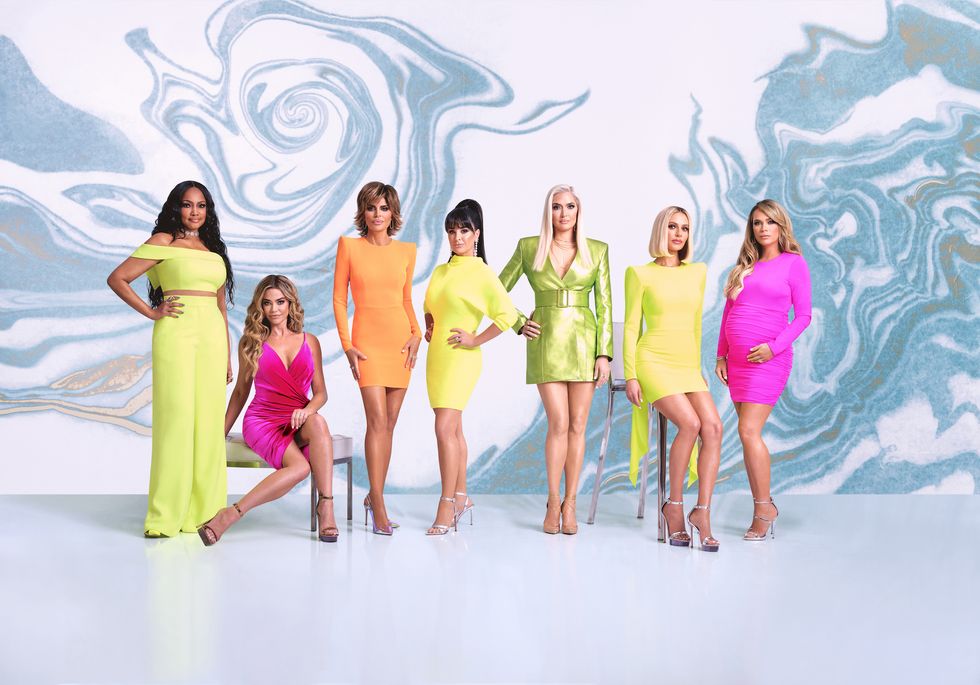 When The Real Housewives of Beverly Hills premiered in October 2010, there were already five franchises as a template — Orange County, New York, Atlanta, New Jersey and DC. But from the outset, Beverly Hills was a fish from a different ocean. While other casts turned nobodies into relative somebodies, Beverly Hills had in-built star power via Kyle Richards and Kim Richards, Paris Hilton’s aunts and former child actors — as well as Camille Grammer, who was embattled in a bitter and very public divorce with Kelsey Grammer that would play out during the show’s first season.

It might have bucked the formula, but early critics were brutal. “They can barely speak, or formulate a cohesive thought,” wrote Salon. “The best thing that can be said for the six Real Housewives of Beverly Hills on their opening night is that they aren’t as annoying as their counterparts in New York or New Jersey,” read the Daily News. “These women know they are disposable,” wrote the Boston Herald. Well-reviewed the show was not. But it went on to become a ratings and pop culture juggernaut anyway, thanks to its stars and ability to tackle subjects ranging from domestic abuse and alcoholism to crying over a stuffed bunny and a season-long narrative arc about a woman’s right to go panty-less.

And though the cast has shifted, one Beverly Hills staple going on ten years strong has been the fashions. From the show’s debut episode, fashion as an extension of wealth has been pivotal. “It’s kind of designed like a French chateau,” Lisa Vanderpump says in the opening moments of the pilot, as the camera cuts between shots of her lavish 17,000-square-foot mansion before panning around her and husband Ken Todd’s sprawling closet, which would be considered spacious living quarters for anyone currently quarantined.

Since then, clothing has played a crucial role in the series, whether it be the women shopping, showing off $25,000 sunglasses, opening and shuttering their own boutiques, designing shoe collections, attending or walking in runway shows, modeling for magazine spreads, or launching swimwear lines. There’s been tiaras, pomeranians in pastel purple jumpsuits, hair tinsel, red latex, bedazzled barrettes, gold hair foil, T-shirt dresses, straight-off-the-Paris-runway looks, and so much more. 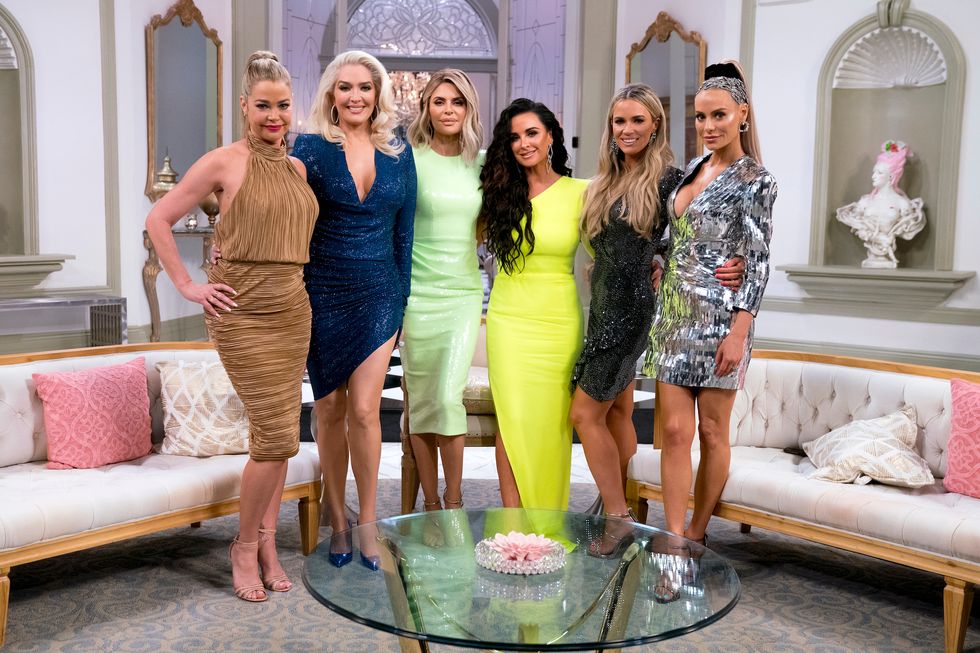 “We’re in Hollywood, land of smoke and mirrors, and they have access to the best of the best stylists, hair, makeup, lighting, all of it,” Joey Maalouf, a celebrity hair and makeup artist whose clients include RHOBH star Lisa Rinna, tells PAPER. “Serving you full show girl glam to go to the dentist on a Tuesday, they give you the most because they love what they are doing.” And it shows. According to Maalouf, the women on Beverly Hills that know how to serve a look are the ones carrying the show. He cites Erika Girardi joining the show in 2015 as the moment it upped the ante fashion-wise.

“Life is about situational dressing,” Girardi herself explains. “The question is: ‘What am I doing today?’ Am I camping or am I in Rome? Camping and Rome require different approaches.” In the case of Girardi, who’s been a performer all of her life under the stage name Erika Jayne, personal style has always been paramount. Her fashion archives go back over twenty years, and feature everything from costume pieces to designer wares from the best of the best. “I never thought about the role fashion would play on the show, it is quite simply a part of who I have always been,” she says.

Dorit Kemsley, who joined the show one season after Girardi in 2016, echoes a similar lifelong love of fashion, recounting going to school in 6th grade dressed up in her mother’s clothes. Kemsley says that early on while shooting she didn’t realize the control she’d have over what she was wearing. “I remember one of the producers was there and he said ‘let me go through your closet and I’ll give you a few selects.’ And he chose these dresses that were a little bit more of the typical Beverly Hills woman. So you can see a natural progression as to when I realized I can dress to who I really am and use the show as my runway. When you are in a group of women that step up their fashion game it encourages each of us to step it up as well.”

For Lisa Rinna, who had been in the business for decades on shows like Days Of Our Lives and Melrose Place before joining the series in its fifth season, watching castmates like Girardi and Kemsley helped to incentivize her to up her style game. “I feel that I’ve always had my own style and vibe going into Housewives,” she says, “but after a few years of having to dress myself for twenty-one episodes plus events and trips, I decided to look for, interview and hire a stylist.”

Not every ‘wife opts for designer. “I have always been a bit of a hooch and joining the cast of RHOBH didn’t change my style at all,” says Brandi Glavnille, who joined the show in its second season in 2011 and departed full-time in 2015 (though she still appears as a guest). “I think the only thing I really changed was wearing big, fake diamond earrings because [the producers] liked the look for the interviews. But I am hoochie at heart. That will never change. I hate wearing bras and love to wear as little clothes as possible. And I’m very frugal. I didn’t grow up with a lot of money and as a single mom I saved every penny I got. I think if you watch the show you know I do my own makeup up in front of a mirror sitting on the ground.” 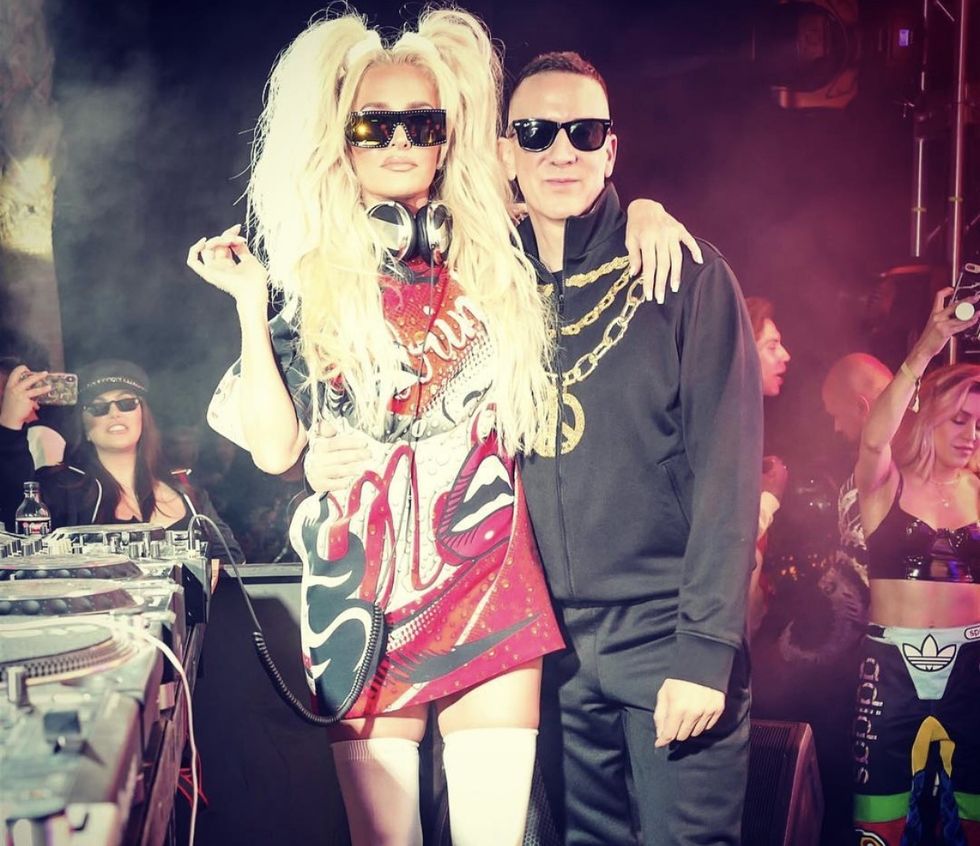 Still, there’s no denying Beverly Hills status as the Housewives fashion franchise among the eight currently in production. Take, for example, a Girardi look from season nine: a blazer pulled directly from Jeremy Scott’s Moschino SS19 runway. “This look is one of my favorites,” Girardi says. “I have worn a lot of Jeremy Scott on the show and his designs have helped me tell my story.”

There’s a lot more moodboarding than you’d think. “We think about things that we have done and things that we would like to do, inspiration can start from an editorial image, an old movie, a place, a color… or even an old memory,” Girardi adds. “From there a conversation starts between myself and my creative team and after a few calls/meetings we narrow it down to our specific look.”

Like Girardi, Kemsley says her outfits change depending on her mood, and always with an eye toward the runway. “I had a full love affair with Versace this year,” she says, which was seen on the show via a lace-trimmed printed silk-twill bustier top and matching pants — both emblazoned with the house’s iconic baroque print and Medusa motif. Her first breakout fashion moment happened toward the end of her first season. “I was discussing with my hairstylist Justine Marjan how to do something fun and so we looked to the runway and I thought, ‘This is exciting, it’s fun, it’s different.’ And she said ‘Why don’t we cover most of your head with 24K gold leaf?’ And I immediately said yes. It’s not going to be for everyone and I fully accept that. I don’t dress for everyone. I dress for myself and for my husband. Those are the two people that I want to enjoy what I’m wearing.” 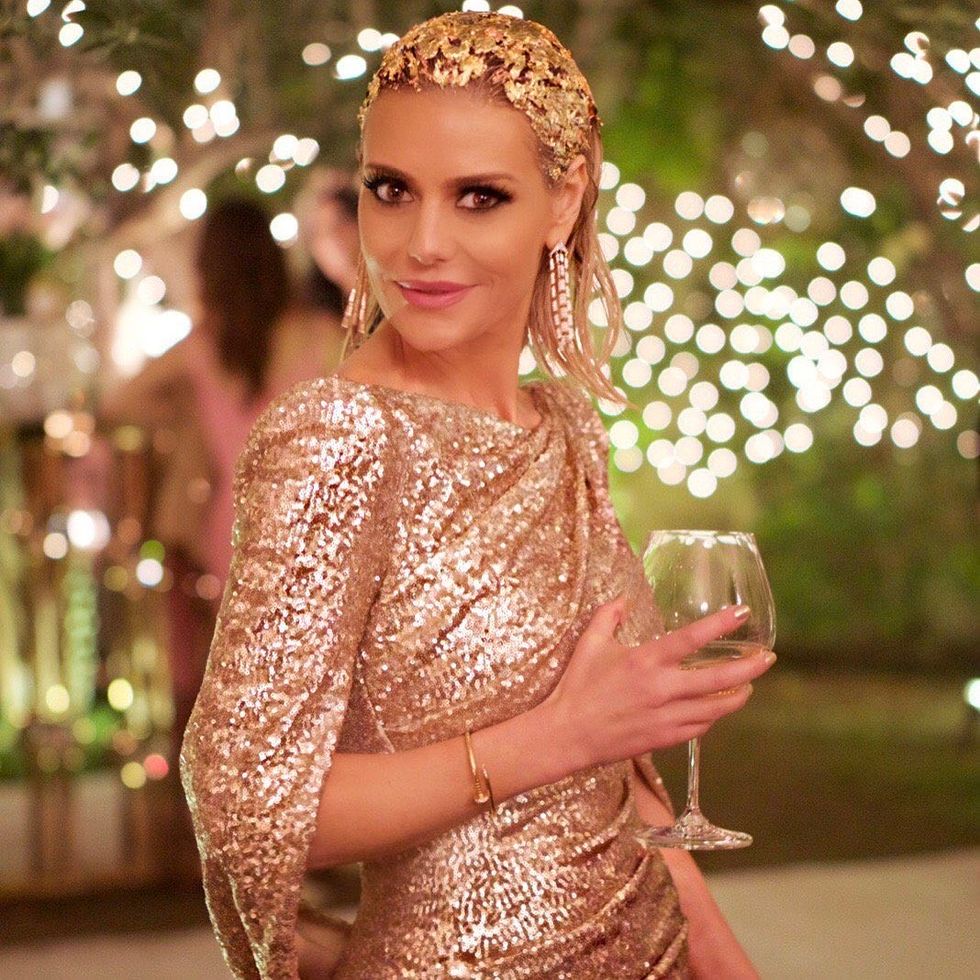 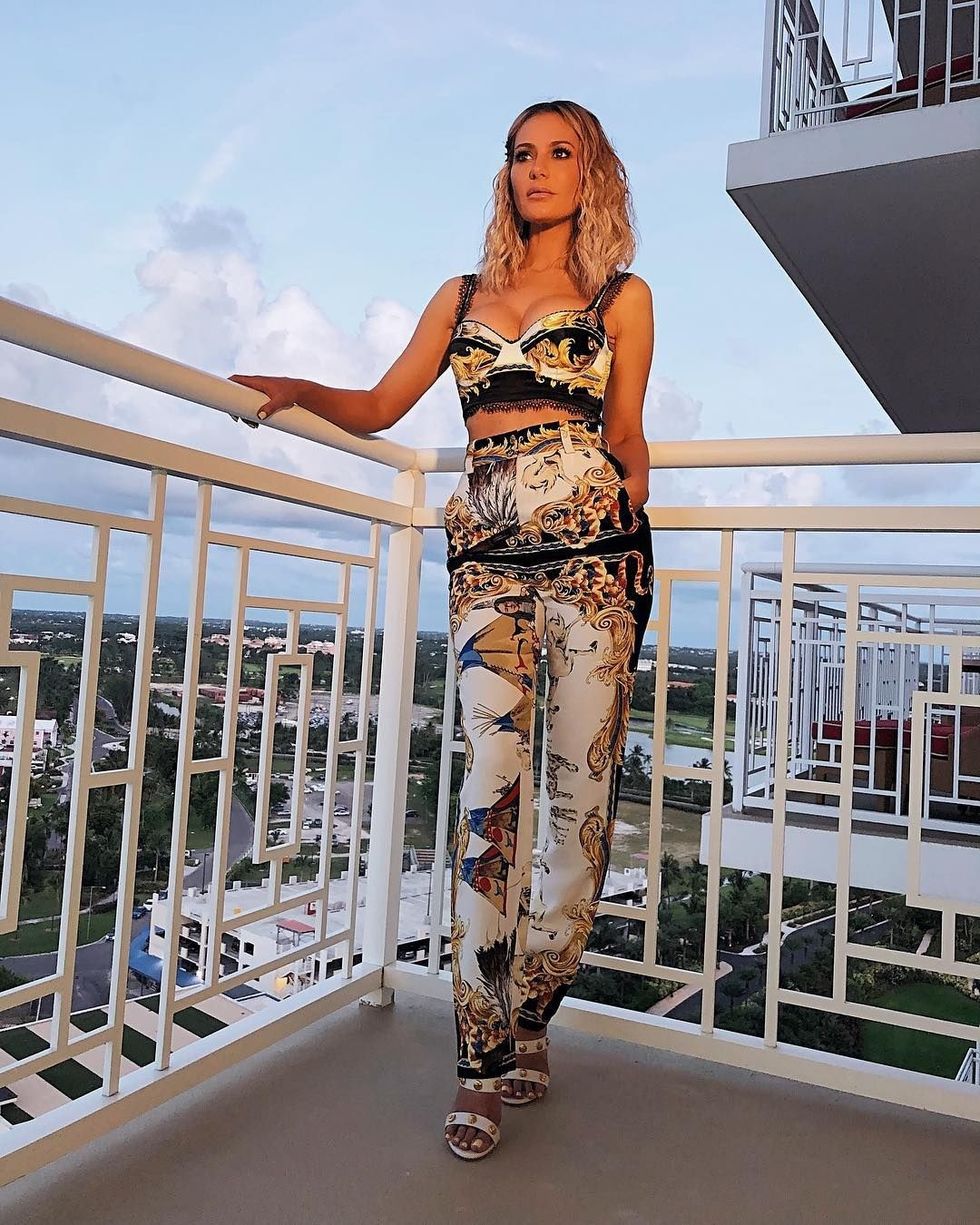 And though Rinna and Girardi have deployed stylists, for Kemsley the operation remains a team of one: herself. “Y’know, I’ve thought about for time purposes hiring somebody, but I can tell you that it’s one of those things I just enjoy doing myself,” she says. “It’s therapeutic for me. Most of the time my kids are in bed and I go into my closet and I just like to play, or I see something and that starts a look in my head and then it’s just kind of putting the pieces together.”

The fashion world has taken notice. “I was very disarmed because underneath the glossy exterior I did not expect this very sincere heart telling me that ‘your clothes make me feel like who I am,” Scott said of Girardi last year at his namesake Spring/Summer 2020 show. “Lisa has the kind of energy which would excite any designer she meets,” says Christian Cowan, who outfitted Rinna at one of his recent runway shows in LA. “She’s excited, trusting in your idea and down to create with a confidence which brings new energy to your vision.” And it’s this excitement that the women carry that gives the viewers, by proxy, that same excitement in getting to look forward to not only the week’s drama, but what each of them will be wearing.

“Not hating on the other Housewives franchises, but Beverly Hills is the epitome of Hollywood glamour,” says Maalouf. “The cast gives you production value, henny. Rich and flawless AF, head to pinky toe. Lace fronts laid, mink lashes poppin, tits and ass snatched and that’s before the Balmain, Dior, Dundas, Atwood, and Birkin oh my! You want it, they got it.”

Welcome to Wear Me Out, a column by pop culture fiend Evan Ross Katz that takes a look at the week in celebrity dressing. From award shows and movie premieres to grocery store runs, he’ll keep you up to date on what your favorite celebs have recently worn to the biggest and most inconsequential events.