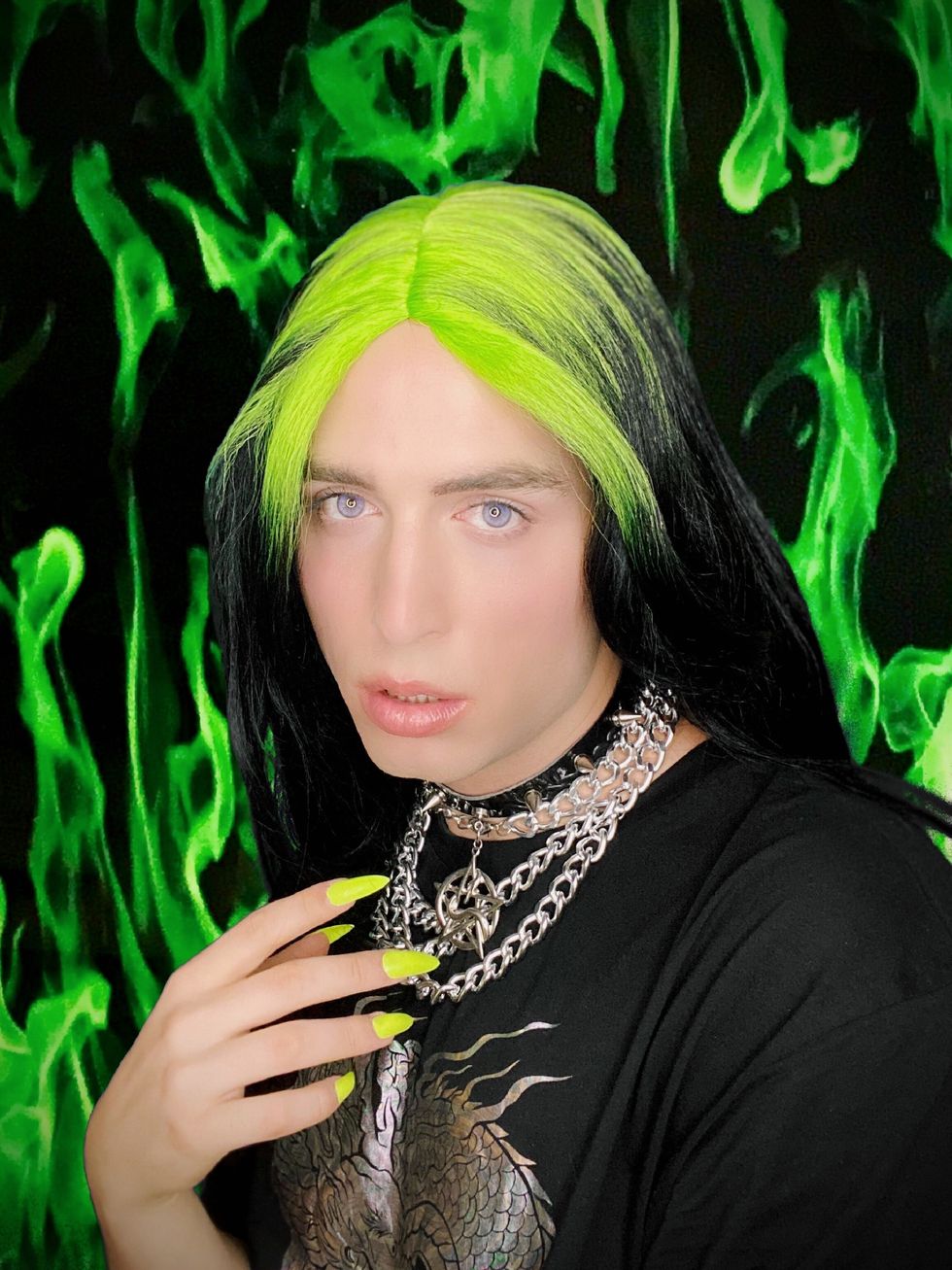 We all need a distraction right now — even if only for a couple minutes — and Benny Drama, the virally-sensational Facebook and Instagram creator, is working overtime to push out the kind of content that keeps so many of us from going crazy in quarantine.

Drama’s latest video, “Billie Eilish in Quarantine,” premiering below, is all about everyone’s favorite alternative queen of the radio, and what her life might be like, right now, in lockdown, at her parent’s place (with Finneas locked in his room for the most of the day).

Although we may not know exactly what Ms. Eilish is going through right now, or where she is, or who she’s with, the comedian takes a stab at imagining the “Bad Guy” singer lounging endlessly around the house, pestering her mom for snacks, and complaining about being bored while making farting noises… and possibly planning on fleeing her rents’ place for Drake’s “dope” mansion instead. For those of you who have only ever listened to Eilish sing, not talk, you might not be aware of her usual speaking cadence; take a look at her various interview clips and past social posts, and you’ll realize how spot-on Drama really is here. “Mom! Where are my Heelys, bro?!” 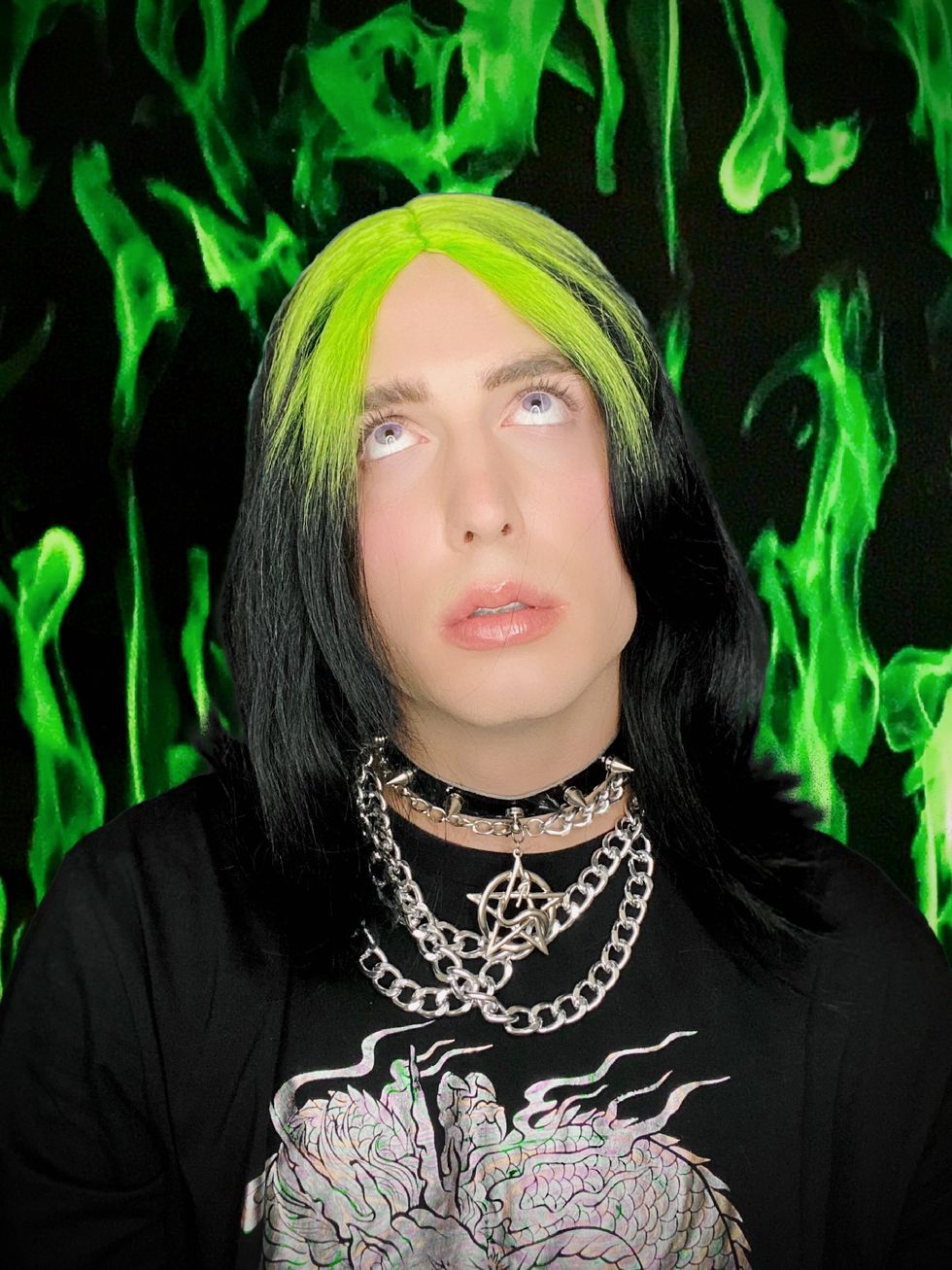 Aside from the mannerisms, Drama’s look as Eilish is near perfection. From the black and blue hair with neon-green roots to the sharp lime-tinted acrylic nails and industrial raver outfit, Drama would be indistinguishable from Eilish if they were to stand together on an imaginary red carpet… albeit about a decade of age and a foot of extra height between them.

“She’s total tomboy vibes,” Drama tells PAPER. “I think of her as this, like, Nickelodeon stan almost. I approached it in a way of like, I don’t actually know what someone who’s 18 is necessarily watching or what the snacks from their childhood are, so I just treated it solely like a millennial thing. And I was like, actually, it’s kind of hitting for me. I’m gonna go with it.”

We sat down with the recently relocated Benny Drama to discuss “Billie Eilish In Quarantine,” how he is keeping creative in lockdown and when he hopes to be back to his original adopted city of New York.

So when did you move to LA? It was the week before NYC’s shutdown, right?

It was literally four days before it. And New York went into full quarantine while I was in the air, flying to LA. It’s a bizarre time right now. I’m happy to be in LA now, but I miss New York. It has a very special place in my heart, it was my original inspiration. And I’m heartbroken about what’s happening. But the city is one of the most resilient, strongest places in the world. Obviously, history has proven that. So I think we’ll come back from this, for sure. And I can’t wait to come back and see everyone again!

It must be nice to have more space and better weather, though, out there in California.

The sunny LA weather definitely helps these days. And having more room to create helps too, it’s way less cramped here than my old place in Williamsburg! I miss Bedford Avenue, though. It’s strange not making my videos on that street with crowds around me the whole time.

So let’s talk “Billie Eilish in Quarantine” — we love it!

Thanks! I hope that people know that she sounds like this. I don’t know if people have watched all of her interviews like I have. So there’s always the risk of people not getting it. But I’m excited. I love her, so this is gonna be fun. She’s total tomboy vibes. I think of her as this, like, Nickelodeon stan almost. I approached it in a way of like, I don’t actually know what someone who’s 18 is necessarily watching or what the snacks from their childhood are, so I just treated it solely like a millennial thing. And I was like, actually, it’s kind of hitting for me. I’m gonna go with it. I don’t know if Lunchables is still a thing, but I was able to purchase Lunchables.

Were you able to get the Go-Gurts?

Oh my god, no! I was trying to find them forever, but as far as I know, those do not exist anymore. At least not in LA. Remember when it was the big thing to freeze them? I can still taste them…

Totally! So in quarantine, where are you finding inspiration for your creative work?

During this time I’ve really just tried to make as many things as possible, because I want to give people that escape. Not that people are relying on comedians, but I think they’re looking to creators on the internet to give them that little break from reality, even if for just five minutes. It’s a little bit tricky at times, because all of your ideas are centered around what’s going on right now. You get fixated on it. But you can find a lot of inspiration within that, because obviously, that’s what everybody is doing right now. Quarantining. I’m also going back into some of my older ideas that I haven’t made yet, because it can be hard to find inspiration right now. You’re not out in the world right now. And you shouldn’t be, please stay inside. But I have definitely dipped back into a few ideas that maybe I hadn’t fully realized yet, and I’ve been able to finally do them.

I’d always been meaning to do something about Billie, so once I thought of her in quarantine, I knew that was what I was going to work on next. She lives with her parents, I believe, and that concept — Billie Eilish at home with her parents, even though she’s this huge, iconic star — I think would probably look just like this! It is interesting to think of these people, who we put on a pedestal, as going through the same thing we are. If they’re not playing massive arena tours, what are they doing? And in my mind, Billie has a ring pop on and is watching Rocket Power.