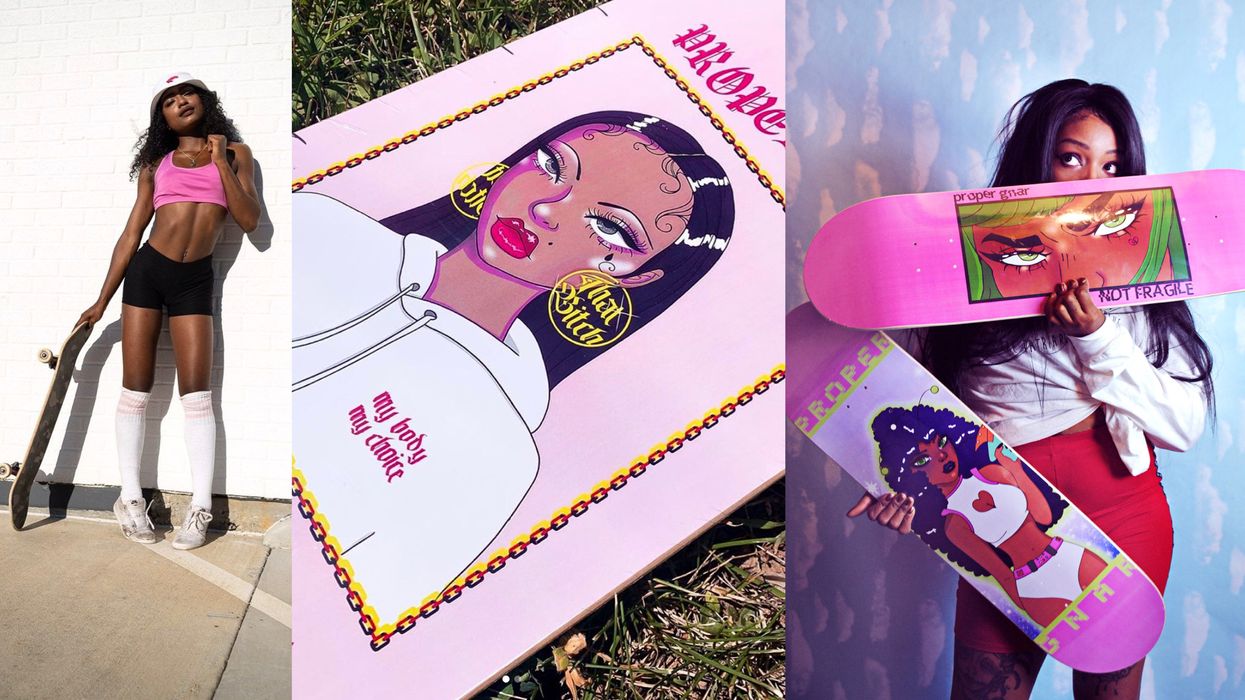 August is officially National Black Business Month and PAPER is showing love to some of our favorite Black-owned businesses throughout the entire month. Our dedicated series, Booked x Busy, is all about shining a light on the entrepreneurs and brands that embody Black excellence.

According to Forbes, Black women are the fastest growing group of entrepreneurs in the US. Within this impressive group is Latosha Stone who is making history with Proper Gnar, the first-ever Black woman-owned skateboard company.

Created in 2013, Proper Gnar offers custom skateboards, bold streetwear and accessories hand-drawn by Latosha herself. With girl power at the forefront, Proper Gnar focuses on merging the worlds of skateboarding and sisterhood with a mission to give female skaters their props. 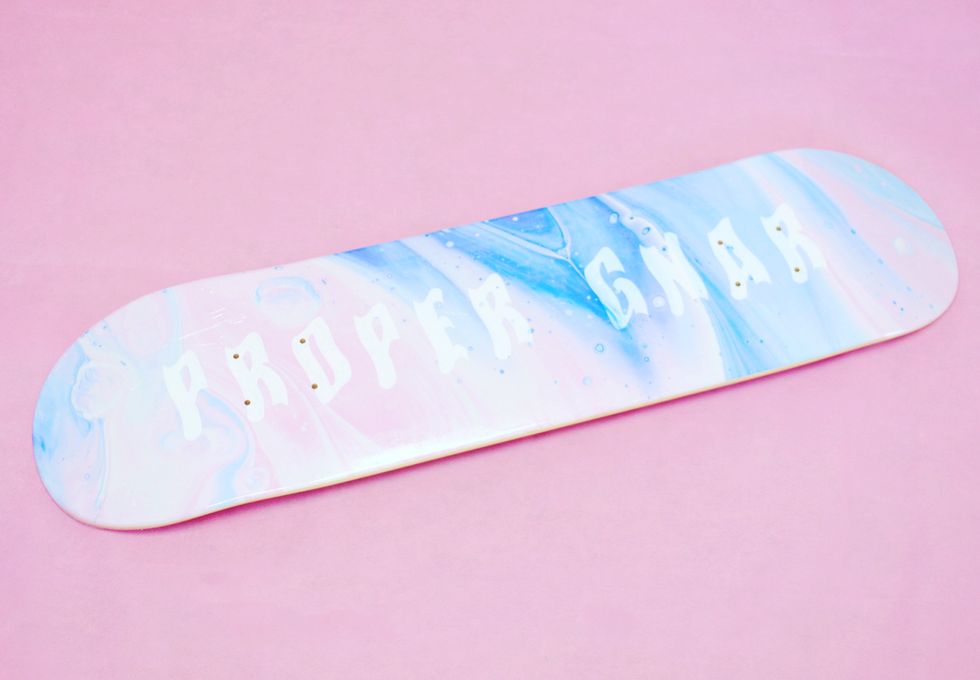 With a recent co-sign from Beyoncé and multiple appearances on HBO’s skateboard-centric comedy series, Betty, Proper Gnar is quickly becoming the queen of the ramp.

PAPER sat down with Latosha, an avid skater and artist, to take a ride on her journey towards success, talk why Black women are all the steeze and the impact Proper Gnar is having across skate culture.

How did Proper Gnar get its start. What inspired the name?

It started when I realized I didn’t want to work at a job I hated anymore. I wanted to do something more fulfilling. I love art, fashion, and skating. I’ve done them since I was young, so it was a way to combine them all. I also kind of felt like there was a void in the skate industry that needed to be filled. Other brands weren’t being creative with their designs, and there was a lack of support for women and girls. 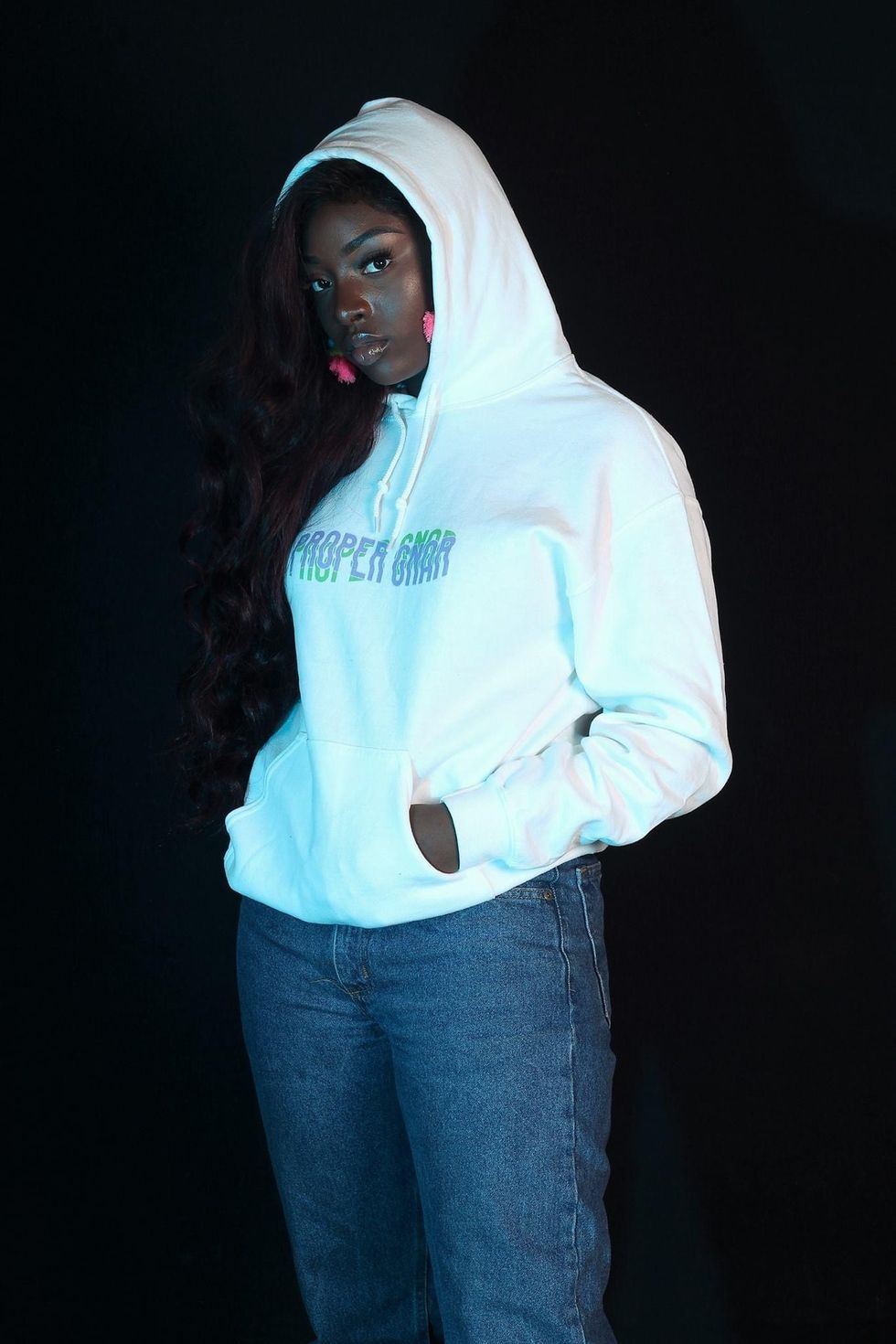 What does it mean to be a Black-owned business, especially when the Black Lives Matter movement is getting so much attention?

There’s been a lot of support around the brand, I feel like my people really got my back. It’s a weird place to be in because there’s so much negative going on in the world. But at the same time the brand is doing well. I’m essentially dealing with ups and downs at the same time. For instance, something good will happen with Proper Gnar but then I think about things like Breonna Taylor and how the police who killed her are still free.

Tell me about the first time you hopped on a skateboard. What was that feeling like?

Honestly the first time was horrible. I still have the scar from the first time I tried to skate. It scared me away from it for years until I got older and was ready to try again with some friends. It got better from there because I actually had guidance. But the wind in your face and the feeling you get when you finally land something you’ve been working on for weeks or months, is unbeatable.

So, where do you draw inspiration from for your skateboard designs?

Everywhere! I watch a lot of anime, fantasy movies, and read comics and manga. Sometimes I’ll be lying in bed and I’ll just get a random idea and draw it up. Current events have an influence on my designs as well. 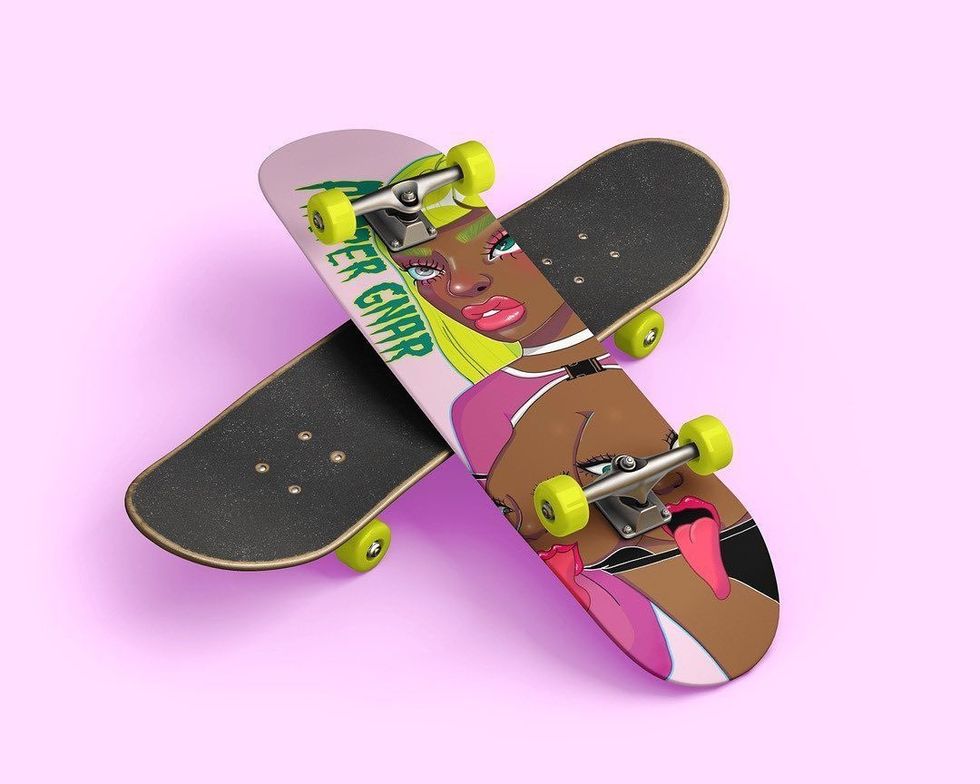 What’s it like being in a mostly male-dominated industry? What are the challenges of being mostly the only woman and the only Black woman at the table?

It’s getting a little better now, but skateboarders do have a history of being sexist. You go to the park and dudes will cut you off or won’t give you a chance to do a line. I like to go really early so I can skate alone and not have to deal with it. You’ll get comments about your body or people will think you’re only doing it to get dudes. I’ve seen some of the best women called posers.

As for challenges, I think it’s just getting people to take you seriously. People are surprised that I’m a woman first of all and then also that I’m Black. As for Proper Gnar, [when I started] I didn’t have access to pro skaters to rep the brand or connections within the industry. I kind of just had to do my own thing and learn from my own mistakes.

What type of impact does Proper Gnar want to have on Black girls and young women? 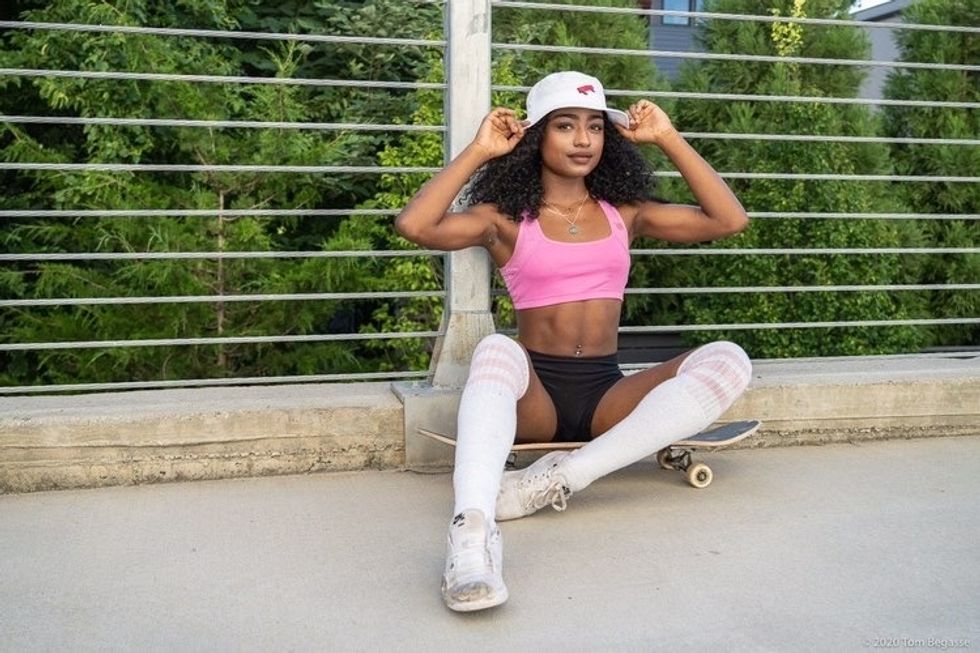 I also want to highlight that there are women out there just as good as the dudes, some are even better. [I also think that] pro women skateboarders deserve more pay and support. The pay gap between pro men and women skateboarders is insane. Plenty of women get flooded with clothes and stuff from shops, but it’s less common for them to actually get boards.

As for people of color, I just want people to see that we are out here, too. I’ve gotten so many comments lately from people saying they didn’t know Black women skated, but there’s so many of us!

How does someone get into skate culture or design? What advice would you give an artist or business owner like yourself?

Skate culture is weird because there’s people that don’t even skate that are into the culture. I’d say just be yourself and think about what you want to see or wear. Watching videos is a great way to start out and learn some of the basics. From the business side, don’t expect to be an overnight success or make a lot of money from it in the beginning. Connect with the people around you and figure out your mission and what sets you apart from others. 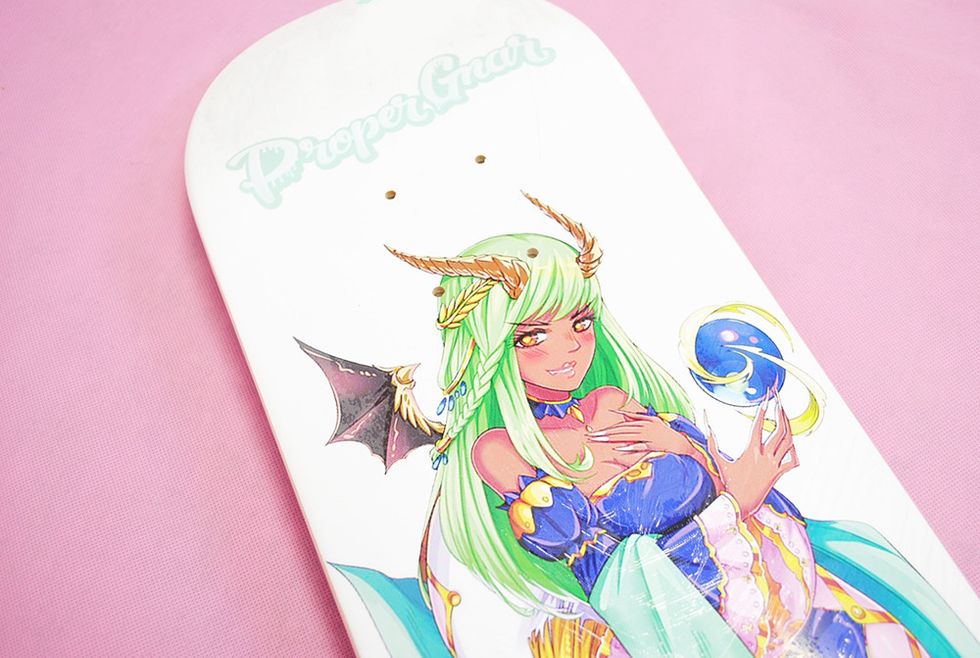 A ton of celebrities have shown your company a lot of love. Who would you like to see rocking Proper Gnar next?

What from Black culture influences your brand’s intersections across streetwear and skate culture?

Definitely music and just growing up Black, in general. 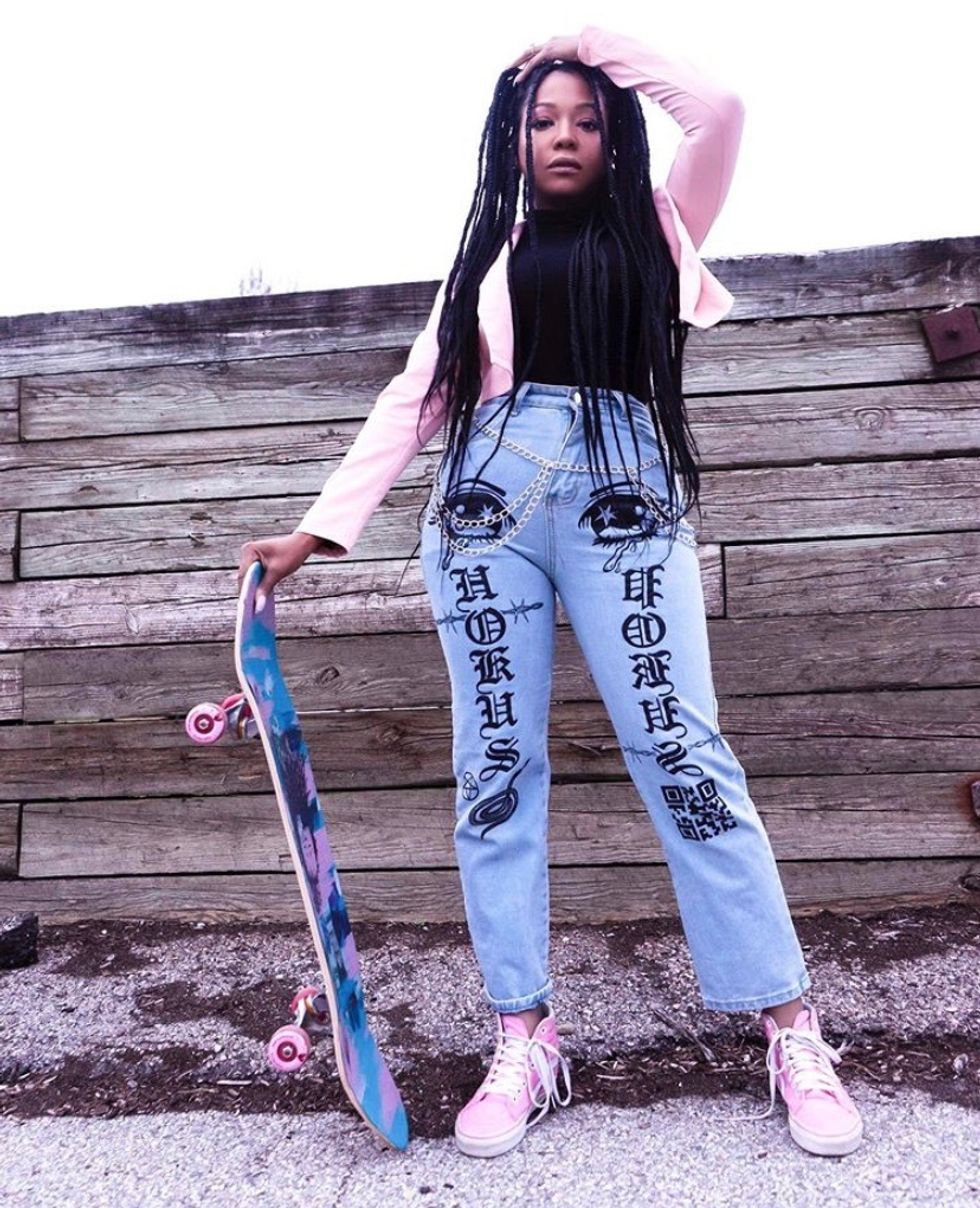 By owning a skate and streetwear brand, you’re proving that Black people aren’t a monolith. What does it mean to share this with the world?

We really aren’t and people should stop assuming so. I hope people can view [Proper Gnar] as an example to try that new thing they’ve been thinking of doing. I also hope it can be an inspiration to stop judging others and to stop putting Black people into a box.

What trends across streetwear and skate culture do you think will be the next big thing?

Honestly, I’m not sure! Streetwear is always changing. New things are being invented but then old things come back in style as well. I’m really loving the tech wear trend that’s going on right now.

You also sponsor up and coming all-girl skate teams and events. What encourages you to give back?

I think it’s great for the community and gives kids something to do. I know I would’ve been so happy as a kid if I had had someone who didn’t judge me and taught me to skate. For sponsoring, I know not everyone can afford new boards all the time and if you’re really out there putting in work, you can go through them fast. So, I do it to encourage people to keep skating. 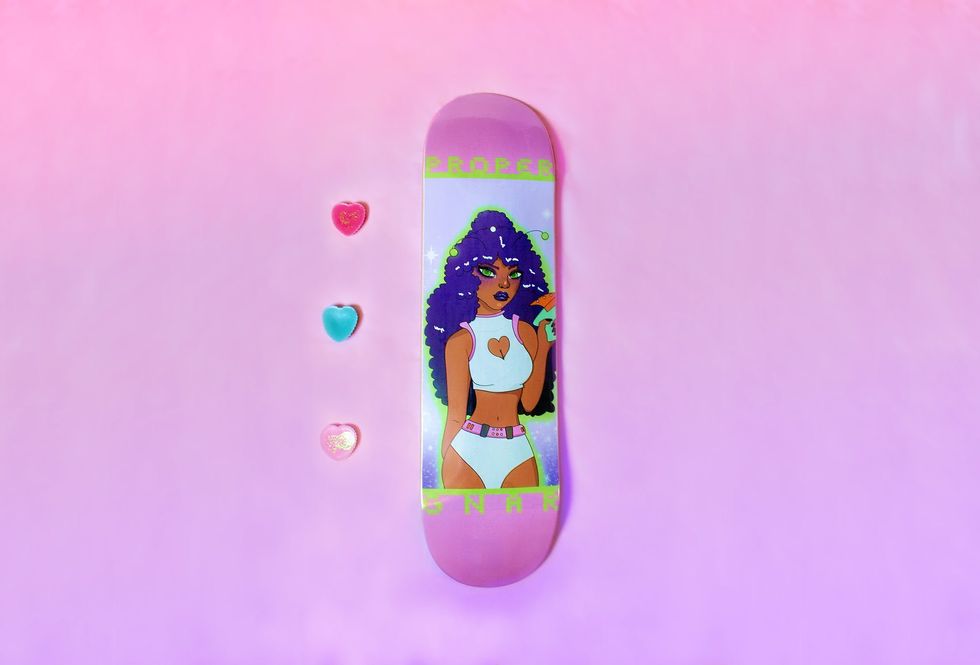 Where do you see Proper Gnar in the next five years?

I’d like to have a bigger team and maybe do some meetups and events nationally. One of our team members is setting up skate clinics in LA, so to get those going across more cities would be cool. I also hope the narrative around skating changes and that people recognize that women are really out here shredding.

Fill in the blank: My Black is…

Thanks to you, the world has a little more girl power. What’s next for Proper Gnar?

To keep it going! I’ve got some collaborations coming up with some amazing artists and I’ll even be working with one of my favorite skaters from my childhood. I want to continue highlighting amazing women and even get more on board.