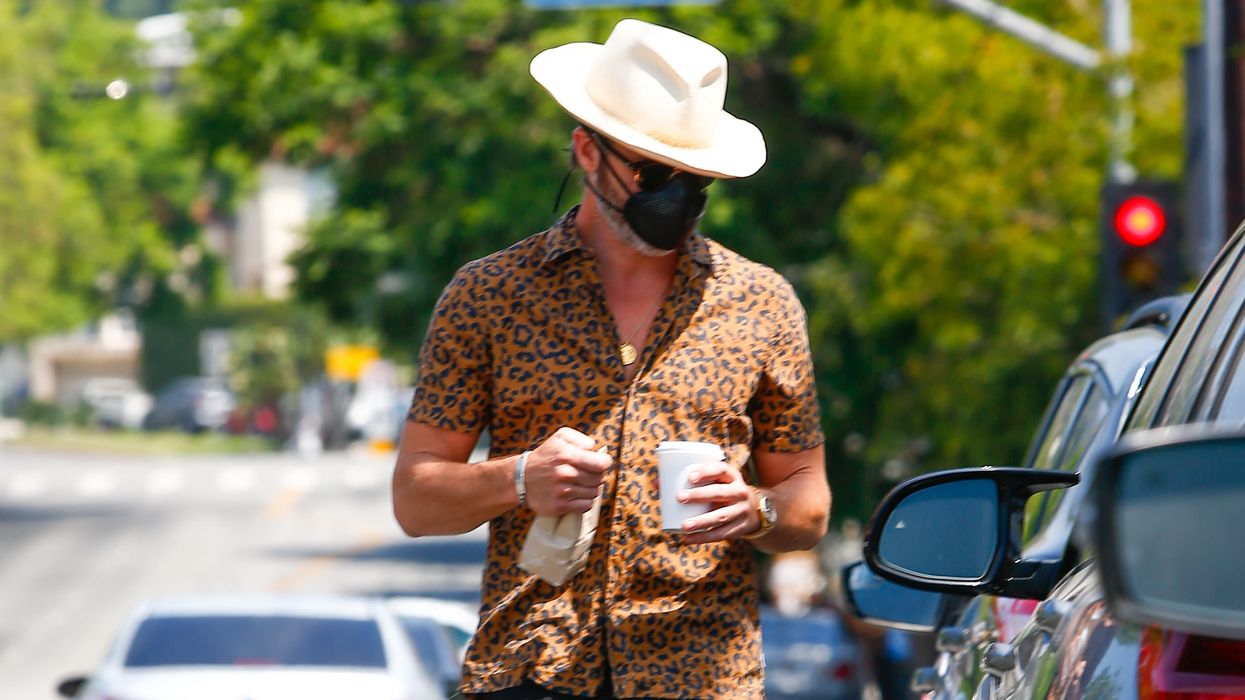 “Who told Chris Pine he was allowed to have such a caked up, dump truck ass?” one twitter aptly posited on twitter last week. But it’s not just his, to quote @louiswearprada,”caked up, dump truck ass” that makes Pine easily the highest ranking of the Hollywood Chris’s (followed closely in descending order by Evans and Hemsworth before a steep fall plummets to Pratt), but rather his recent quarantine wares. I’m hardly the only one to take notice. “Chris Pine really pulled ahead and became the best Chris,” writer Dana Schwartz noted on Twitter earlier this summer. “It happened so slowly I didn’t even notice it was happening.”

The real moment that got the internet hot and more bothered than usual (the latter of which is a low bar) happened on August 4th when Pine was spotted by paparazzi exiting a Los Angeles Blue Bottle Coffee in a leopard print shirt, slim-fit black jeans and white Birks accessorized with a golden medallion necklace and a Panama hat. 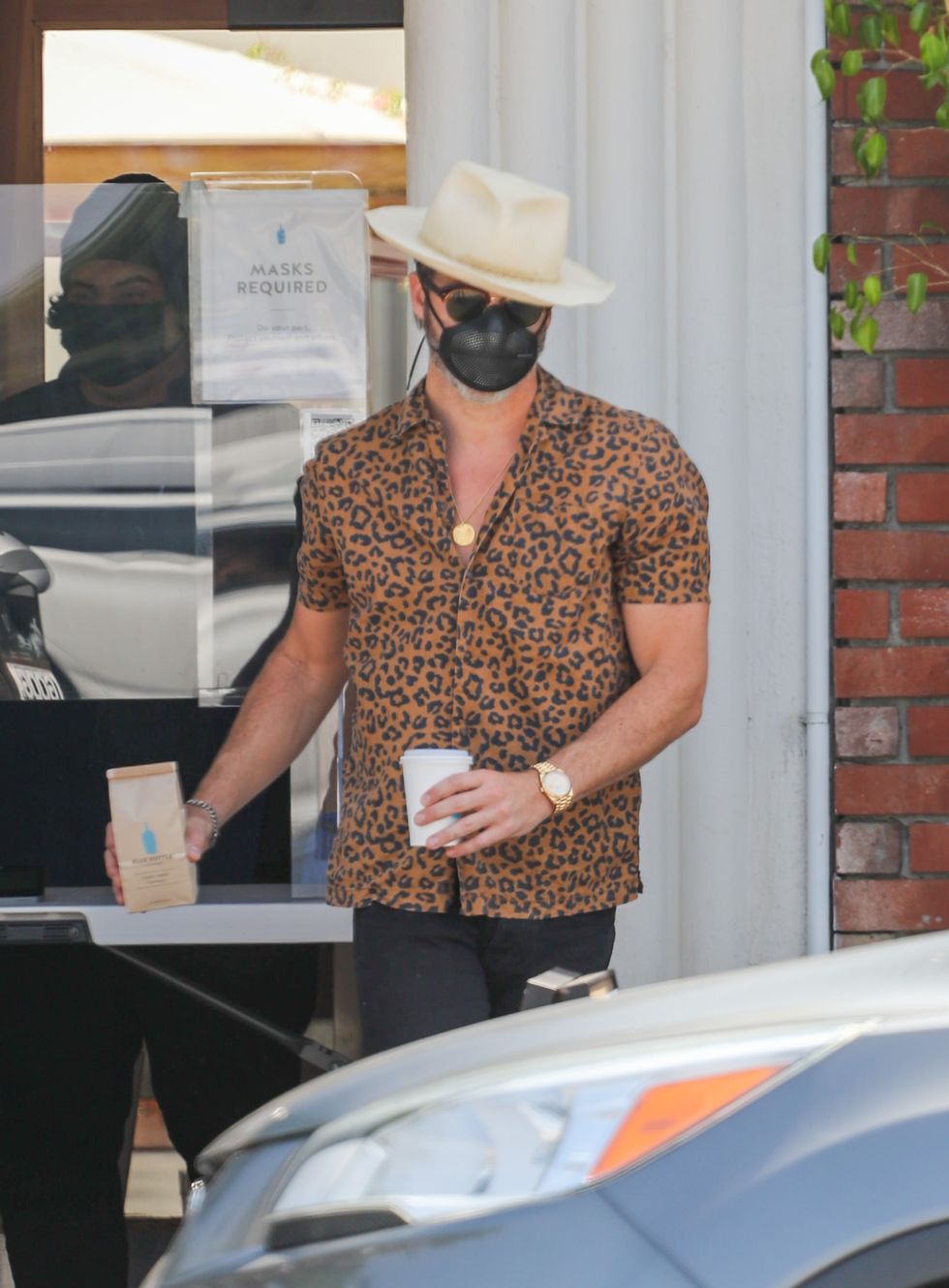 If an image had the power to blow a back out, it was certainly this one. His black, hockey-cup like mask firmly affixed to a jawline so pleasing it would not be out of place atop a Nancy Meyers film kitchen as he made his way into his vintage red Alfa Romeo convertible. 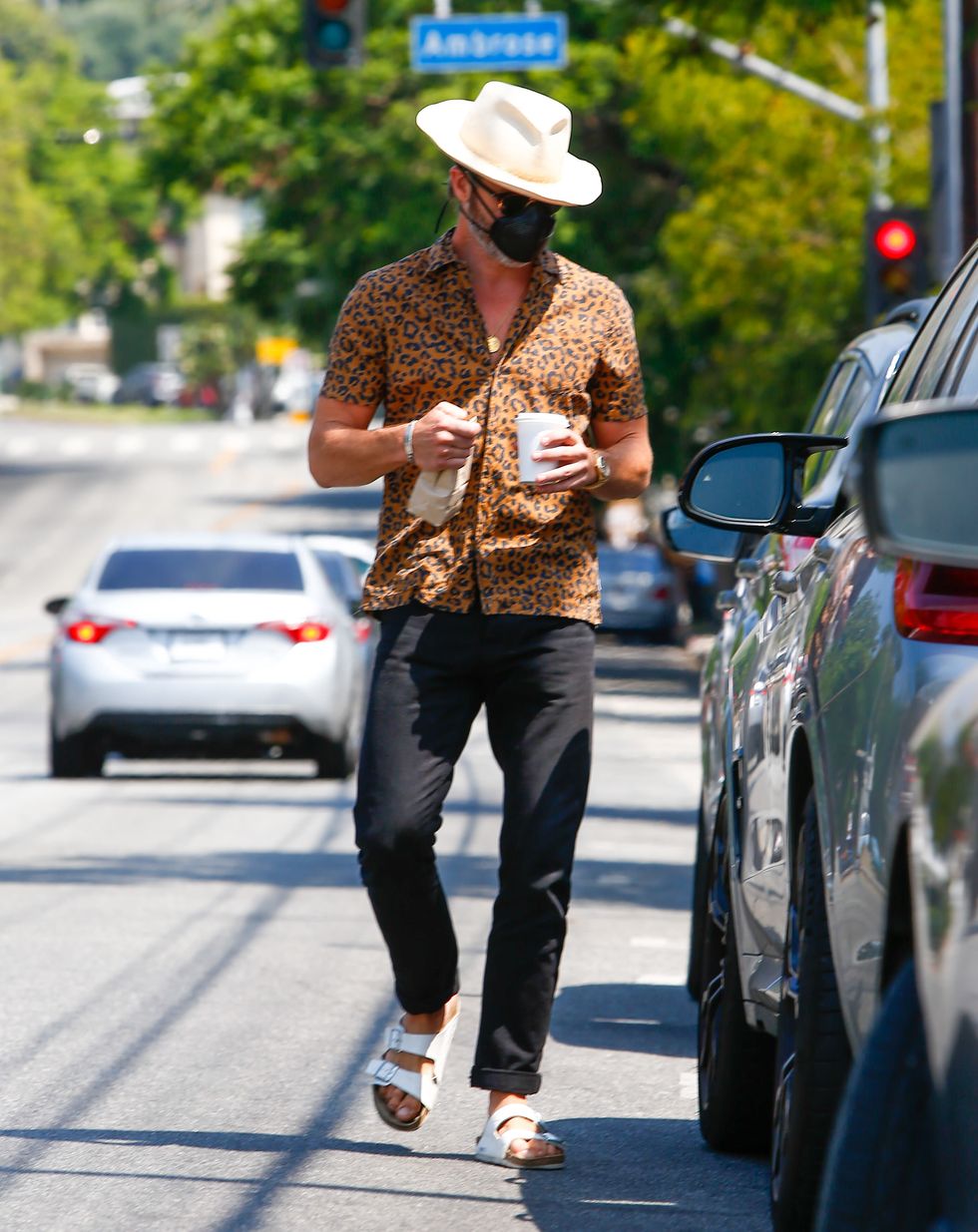 “He’s honestly the most fashionable mask wearer and shorts wearer there is,” noted Olivia Wilde on an upcoming episode of my podcast Shut Up Evan (Wilde will next direct Pine in Don’t Worry Darling which also stars Dakota Johnson, Florence Pugh and LaBeouf). “Chris Pine is who you want him to be, he is that person through and through. He’s The Dude from The Big Lebowski.”

But the leopard print was more a crescendo on a season of remarkable quarantine looks that helped pivot Pine away from the double-breasted Ralph Lauren Purple Label persona and into something less refined, but no less eye-catching. Does it help that he’s stunningly attractive? Reader, it does. Would these looks we’re praising earn the same thirsting on a non-Chris Pine? Probably not. But like LaBeouf, Pine inspires eyes emoji when he steps out in his mixture of high-low (high = he’s hot; low = he’s wearing a Ruth Bader Ginsberg tank tops and not a $780 Balenciaga football jersey). That tank top popped up during an April run with girlfriend Annabelle Wallis. 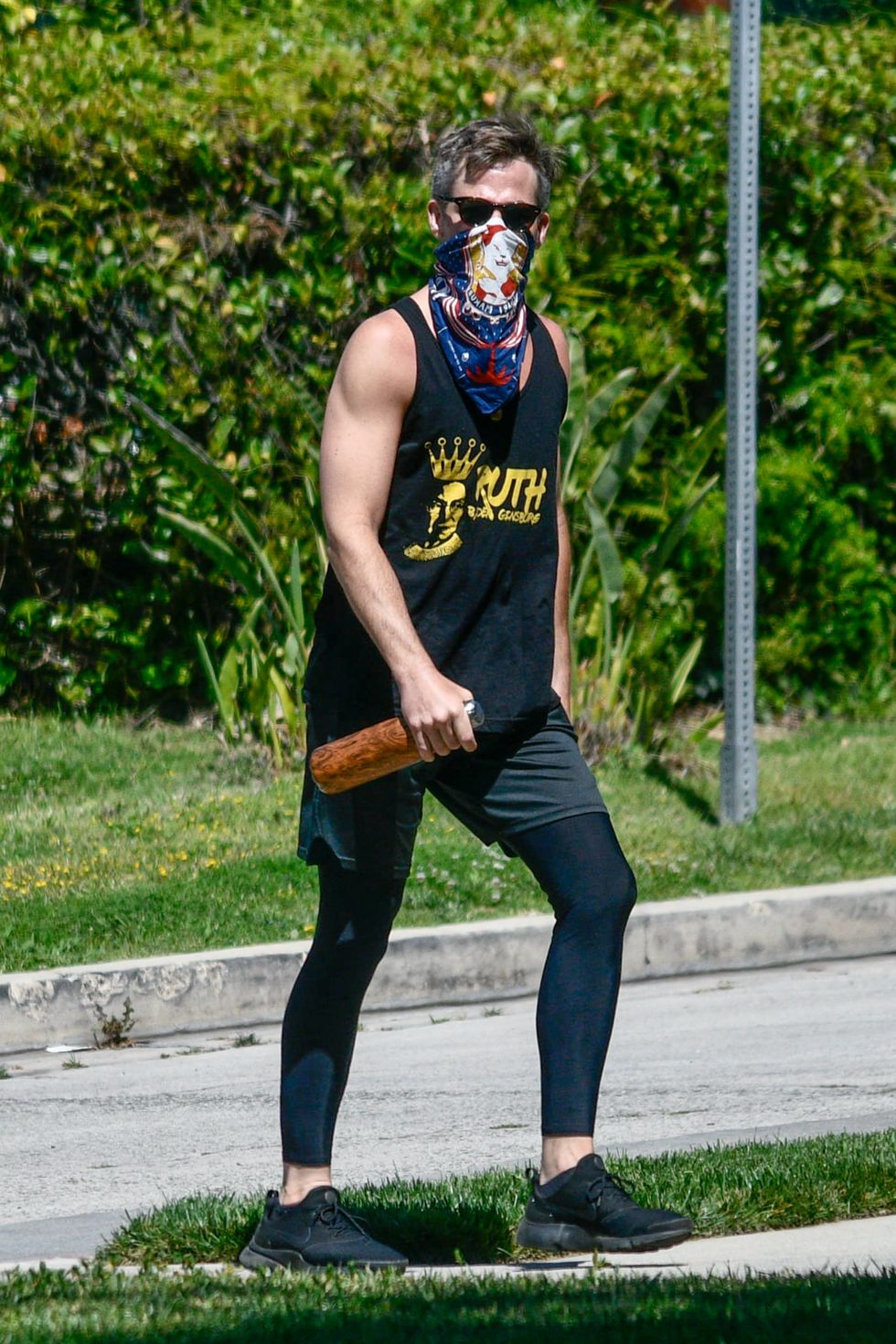 While celebs like Gal Gadot, Sarah Silverman and Will Ferrell were filming the “Imagine” video, Pine was minding his business, covering his face with a bandana while repping RBG. It was neither boisterous nor ostentatious, and yet the alchemy of unproblematic fave with hottest man in the room with sartorial sense just hits different at a time when red carpets are few and far between — and lackluster when risked at all.

Other notable moments came in August, when Pine was spotted leaving a Western apparel store in Los Angeles with a cowboy hat, a pink button down and Banks Journal shorts that fell at a length so perfect they should be canonized. Squint ever so slightly and you might regain hope for the future.

no no no no no no my mind body and soul cannot handle Chris Pine in a cowboy hat during a global pandemic https://t.co/Fg2AmirEc4 — Rachel Paige (@Rachel Paige)1596995227.0

When he was spotted leaving the grocery store in July, mimicking the paparazzi while wearing a mustard yellow button down over orange Banks Journal shorts (sensing a theme?) and converse shoes, his American Spirits and Nag Champa Agarbatti incense sticks tightly gripped in his hands, I nearly wept.

As one Twitter user aptly-minus-the-parenthetical stated: “Chris Pine and his (sometimes questionable) fashion sense is the only good thing about 2020.”

At a time when nothing seems sure in this world — global pandemic, London bridges falling down, Dorinda leaving RHONY — Chris Pine and his white Birks, his leopard print shirts and his Banks Journal shorts have proven a welcome distraction. With a Wonder Woman 1984 release impending, and the possibility of the return of dapperific red carpet Chris Pine, let us memorialize this iteration of the supreme Hollywood Chris.