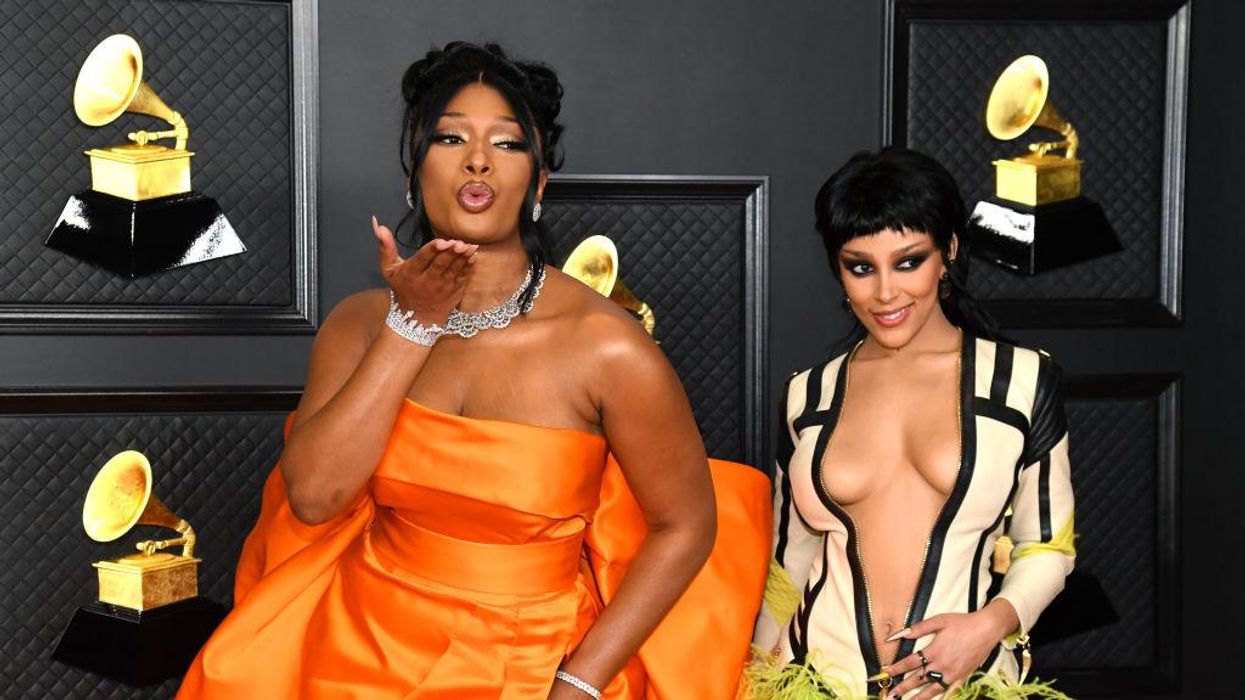 Blue Ivy Carter. Rachel Maddow. Taika Waititi. No, I’m not talking about my dream dinner party guest list. I’m talking about the winners, yes the winners, at last night’s 63rd Annual Grammy Awards. It was an award show that seemed to emanate a “COVID? I don’t know her” type of vibe from the start, with a fully in-person event that included stars parading down the red carpet largely maskless. How quotidien.

“Aren’t you having the best time?” Brad Goreski rhetorically asked mid-way through E! Live from the Red Carpet. I can’t say I was. It was a lot of glitz with minimal glam. Maybe it’s exhaustion from a third straight weekend of award show coverage, but the night lacked moments à la Lil Nas X’s hot pink Versace from last year, Cardi B’s archived Mugler in 2019 or Rihanna’s Jean Paul Gaultier Couture in 2011 — three looks that really stay with you. “This red carpet is doing a lot but none of the things it’s doing are right,” wrote Out Digital Director Mikelle Street on Twitter.

That’s not to say the night was devoid of anything stand-out. One trend did manage to surprise and delight: The matching masks, which came out for the show itself (where they were during the red carpet, who’s to say?). Stars including Billie Eilish (who actually did wear hers on the carpet), Harry Styles, Megan Thee Stallion, Taylor Swift, Doja Cat and Dua Lipa adorned their looks with a matching mask.

Why it took us this many red carpets into the pandemic to get some matching masks? Again, who’s to say? Of course, there was Gaga at the 2020 VMAs, but this show finally brought the concept to ubiquity. It read as the perfect PSA, balancing the fantasy of fashion with the reality of the abnormal circumstances that undeniably colored this and all other award show proceedings.

Let’s start with what popped. A big night for Louis Vuitton, with three knock-out custom looks on Cynthia Erivo and Chloe and Halle Bailey. “Today I’m giving you Nefertiti,” Erivo told me over Instagram DM. “Here’s the real. Truly from my heart. In my soul. I love fashion. The creation, the characters, the imagination, the details, the care and time it takes to make a moment special. I love it.” Erivo continues to reign supreme on every red carpet she steps upon. She’s given us three weeks of a one-two-three punch with Valentino Couture at the Globes, custom Vera Wang at Critics’ Choice. And now this stunner.

Next, attention must be paid to Lizzo in custom key lime Balmain dress. She simply glowed. Was it my favorite dress ever? Not so. But did Lizzo sell it to the point of reformulating my own thoughts on the dress? She absolutely did. Lizzo did what few can in elevating a good dress to great status through the power of servitude. Per Lizzo’s stylist Brett Nelson: “I have been working with Lizzo on a variety of projects over the last two years, and I always want to take to mind disco with Lizzo. She’s such an icon so I wanted to play up the iconic legends but make it our own!” 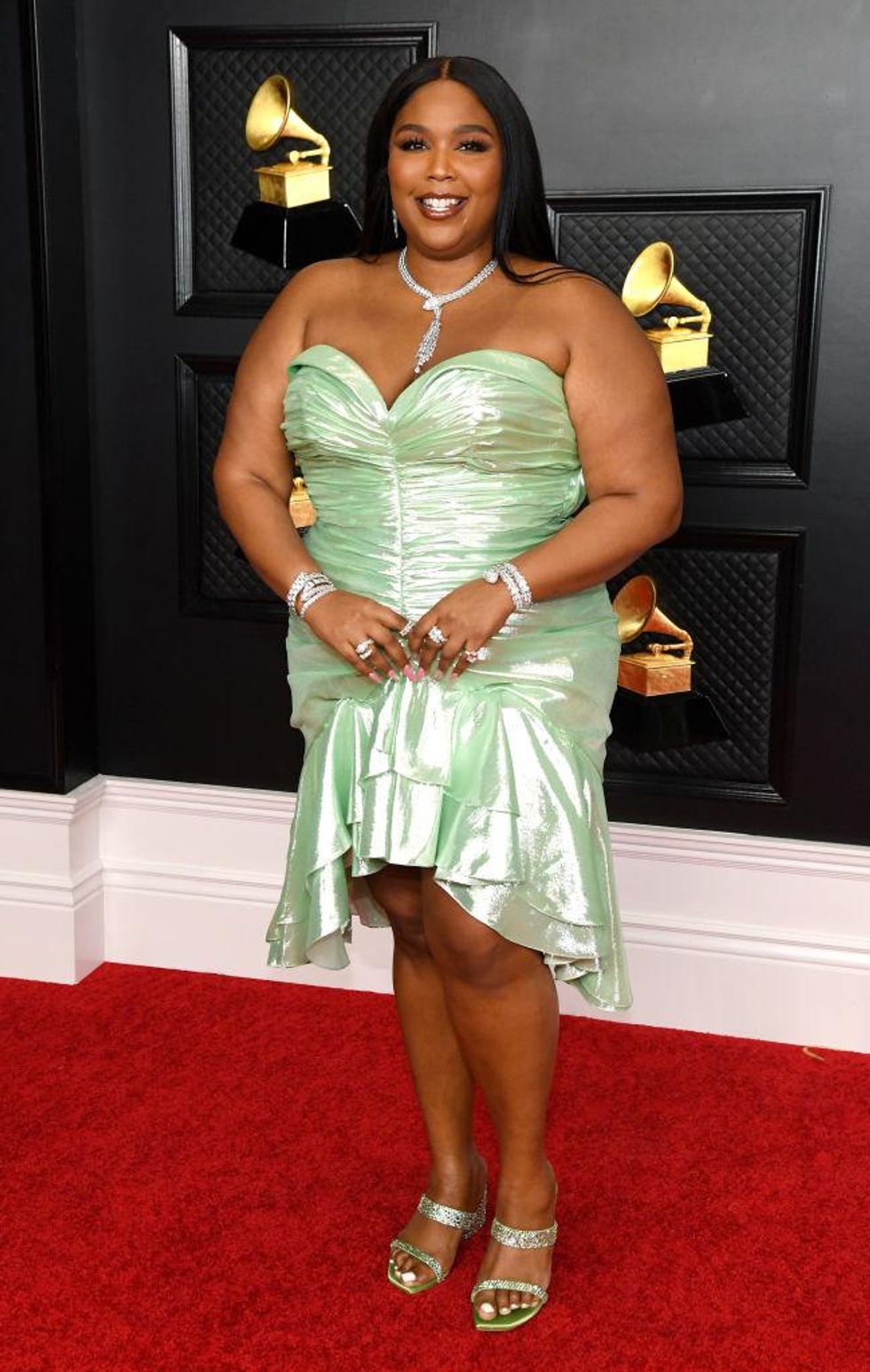 “I honestly think there were better Balmain looks, but she’s also killing this dress that I think is kind of ugly and that’s powerful,” wrote Kim Russell on Twitter. “Rihanna is the only other person to do that for me.”

One of my favorite looks of the night was Phoebe Bridgers in Thom Browne Spring 2018. “I saw this Thom Browne dress forever ago and thought it was so cool… And I asked for it… I basically stole it,” she told Giuliana Rancic during the pre-show. It was irreverent and fun; goofy but stylish.

Other custom moments: Beyoncé in custom Schiaparelli, Harry Styles in custom Gucci, Doja Cat in custom Roberto Cavalli courtesy of creative director Fausto Puglisi (his first look for the house, a look that was an homage to the house’s Fall 2003 collection) and Haim in custom Prada. 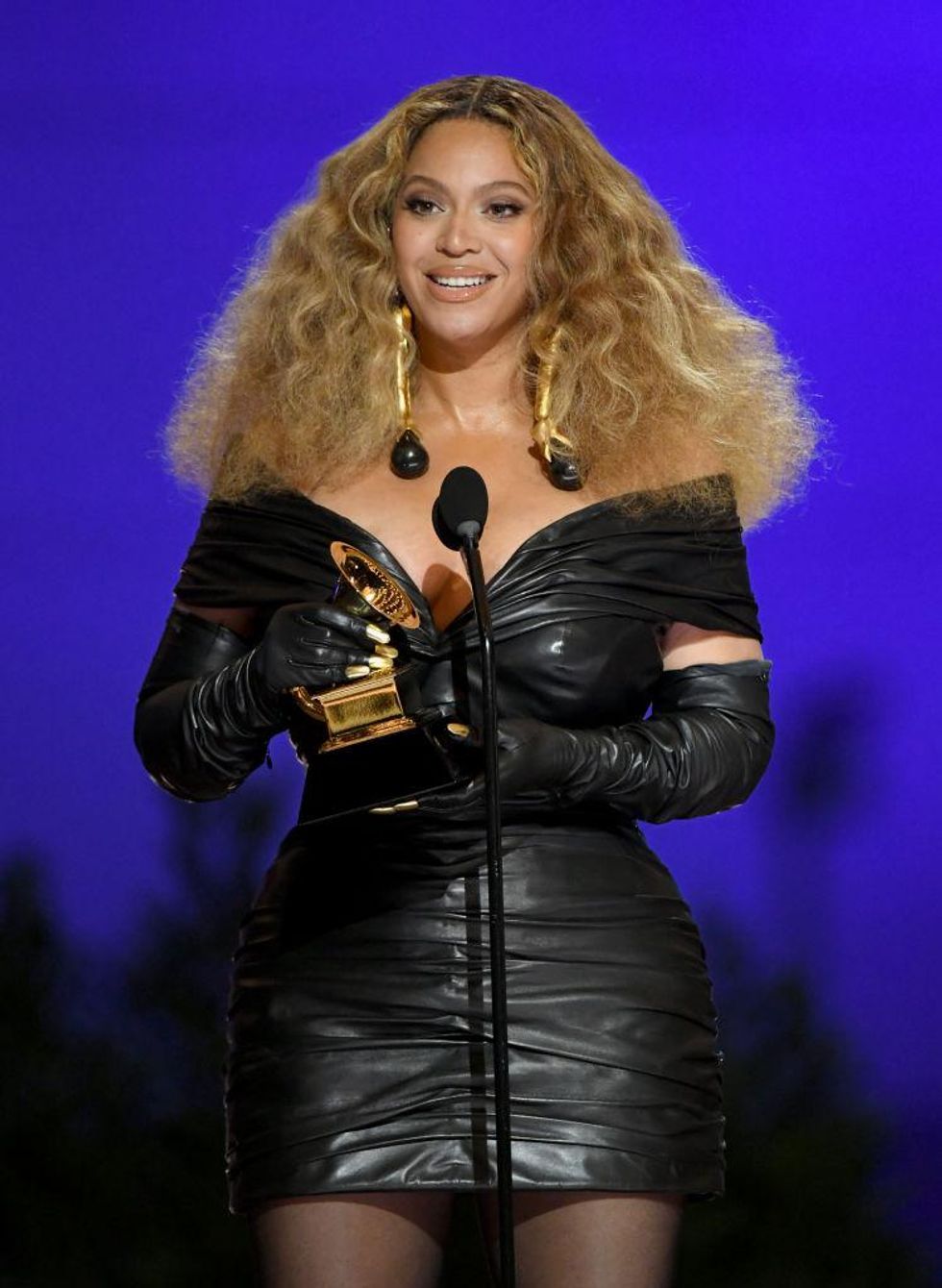 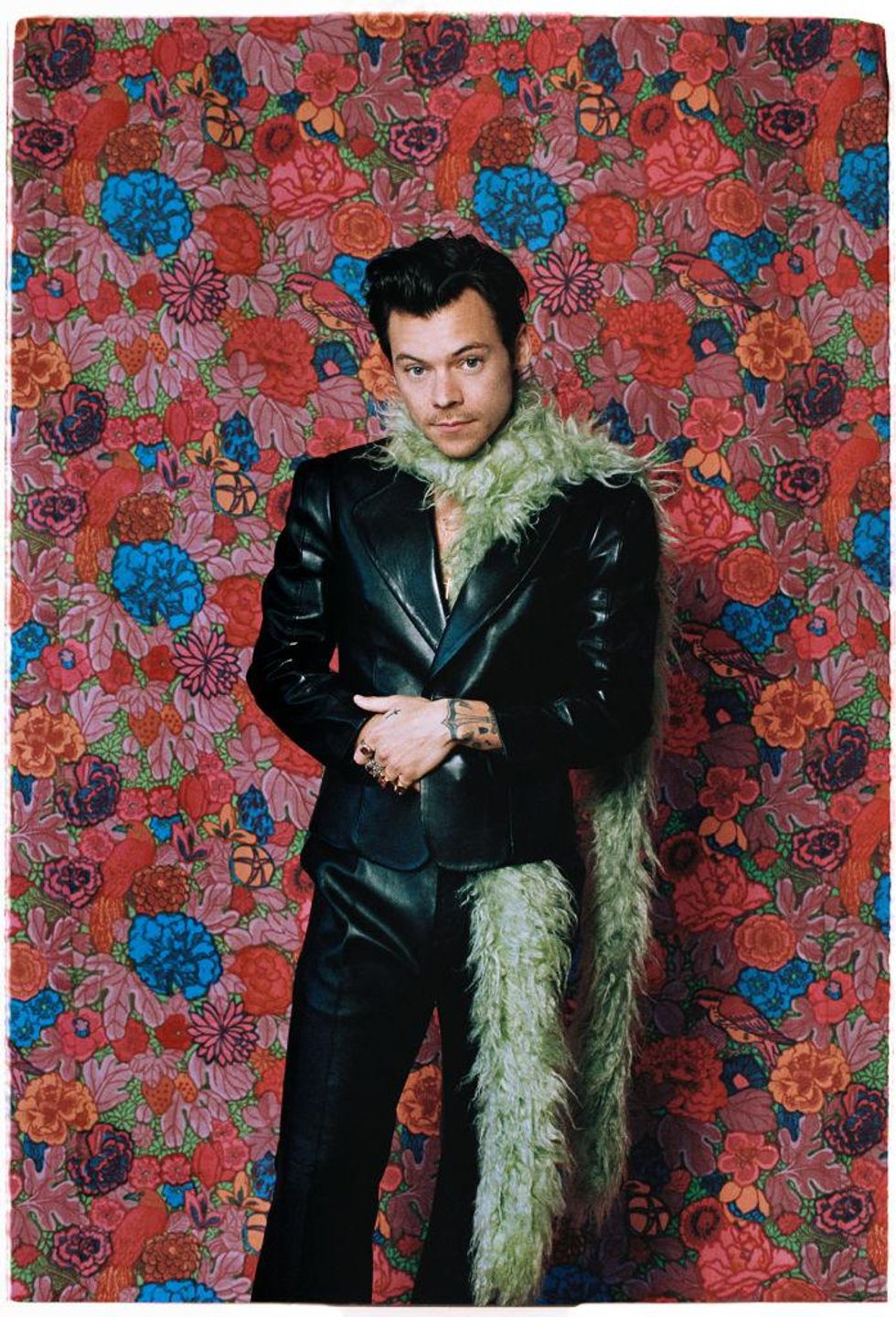 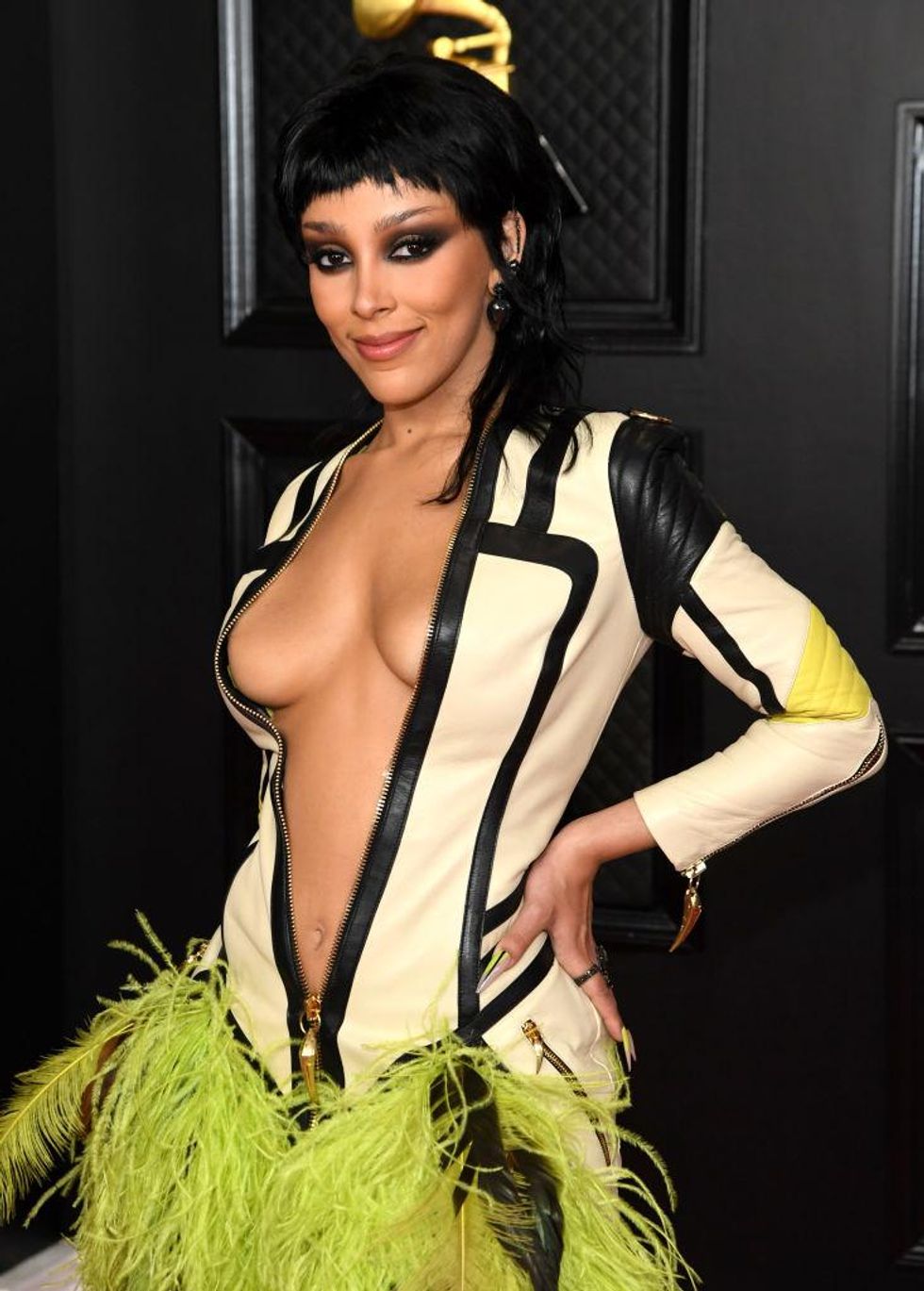 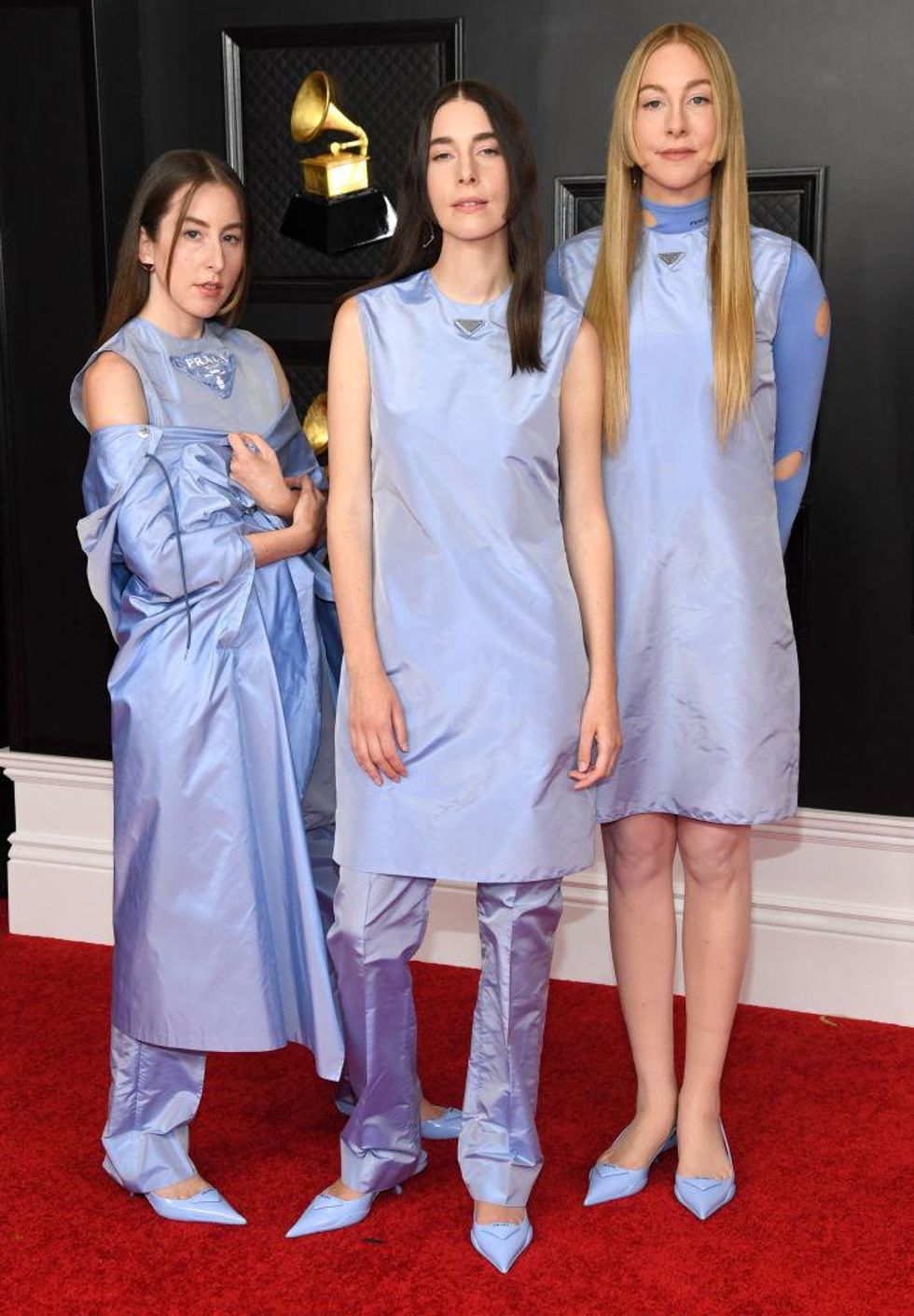 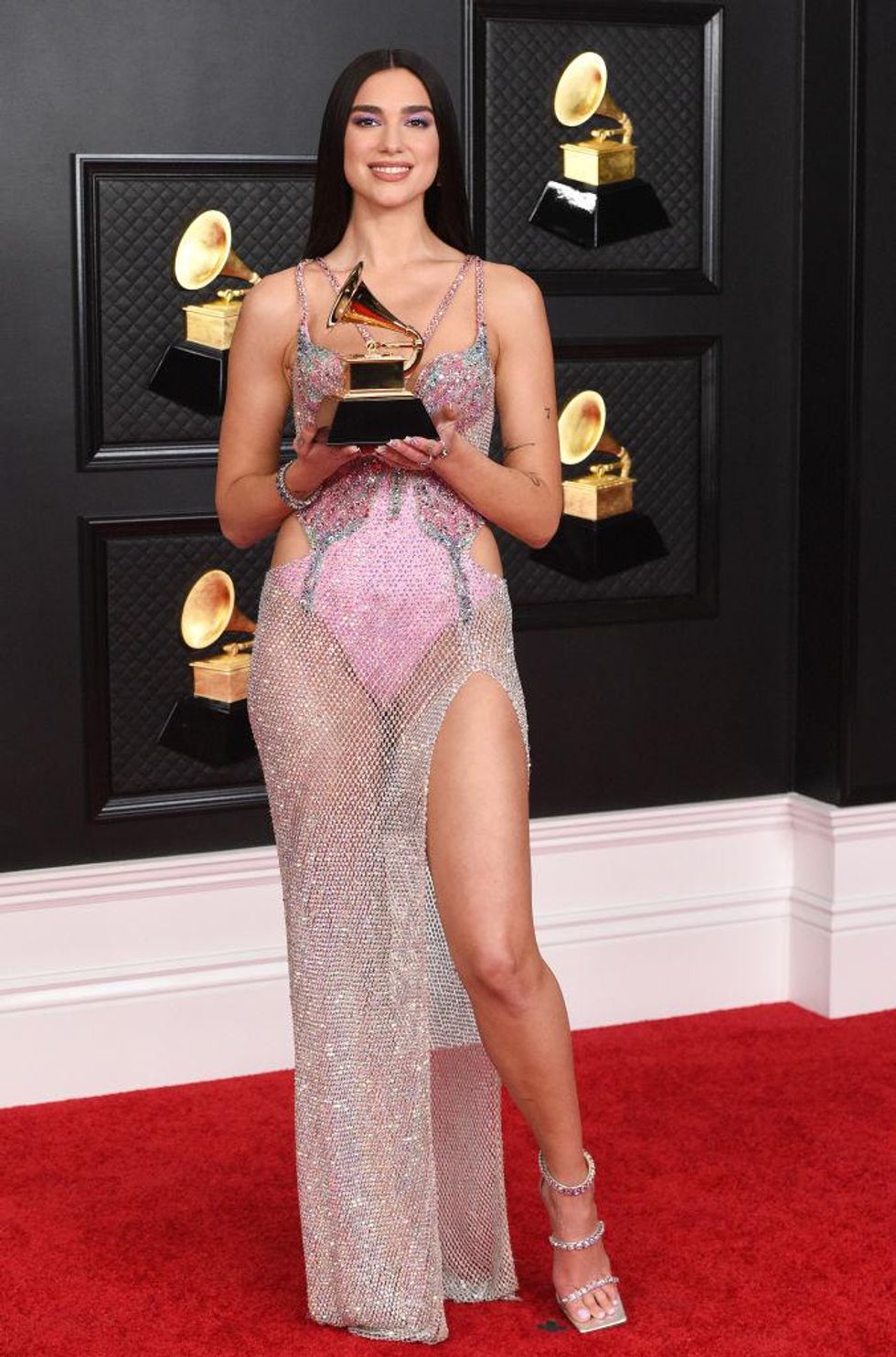 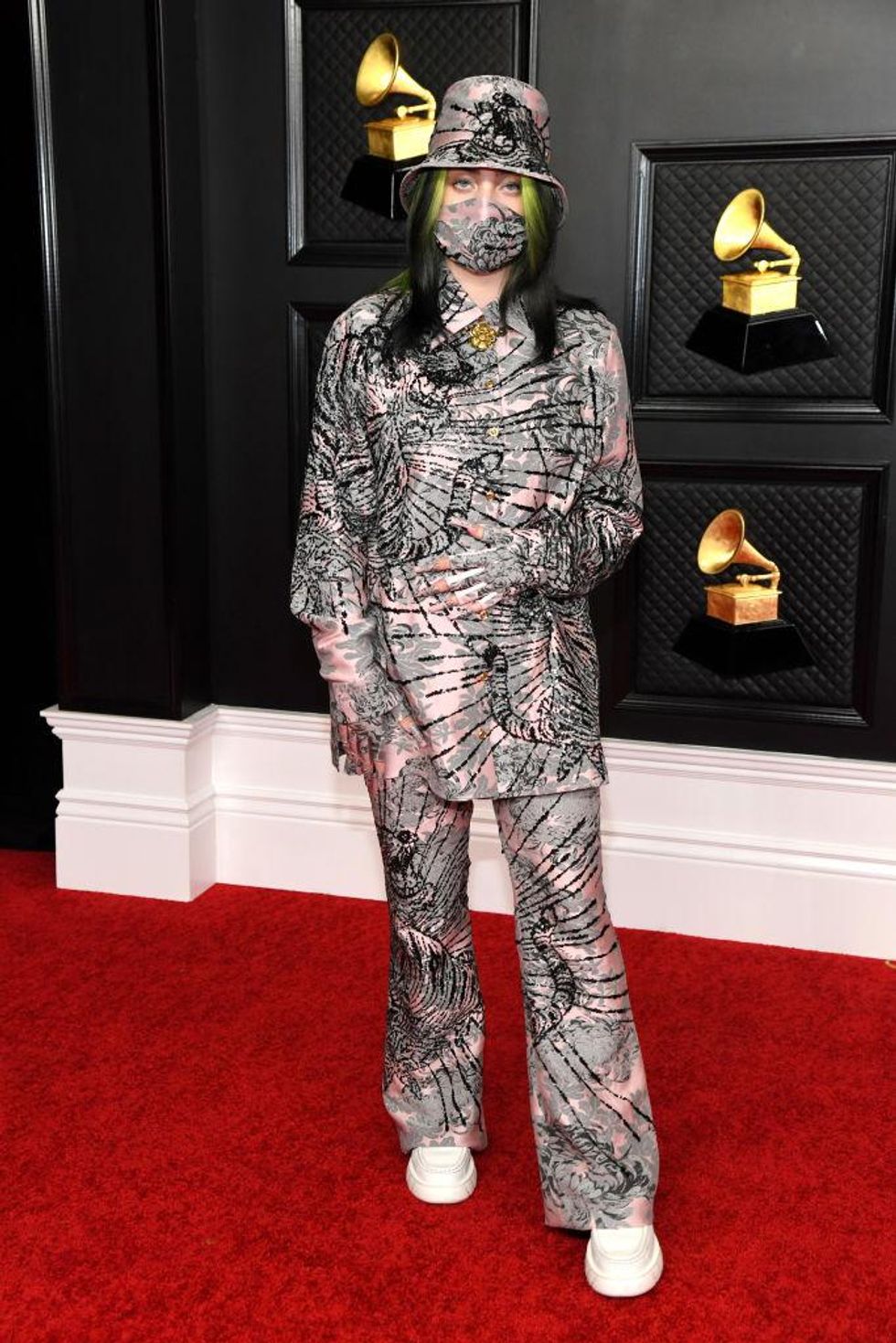 Is it starting to get predictable? Harry Styles and Billie Eilish again in Gucci, Dua Lipa again in Versace, Lizzo again in Balmain. I’m of two minds about it. On the one hand, if it ain’t broke, don’t fix it. And not for nothing these were some of my favorite looks of the night. Would I like to see the dissolution of such stringent brand loyalty? Unequivocally yes. Still, it would be nice to see some more variety, and in particular spotlight on some young designers for whom a placement like this can equate to a boost in brand awareness if not a spike in sales.

Let’s talk about Megan Thee Stallion, who picked up wins for Best New Artist, Best Rap Song and Best Rap Performance during her first time out at the Grammys. She showed up in an strapless orange custom look from D*olce & G*bbana. “Domenico and Stefano’s sketches were so lovely, it was amazing as all of it came to life,” Megan’s stylist Eric Archibald told Vanity Fair, mentioning his inspirations were “Black Hollywood glamour with a touch of the Houston hot girl.” Why Megan and Archibald would go with D&G, a brand accused of racism in the not-so-distant past, is a head-scratcher. 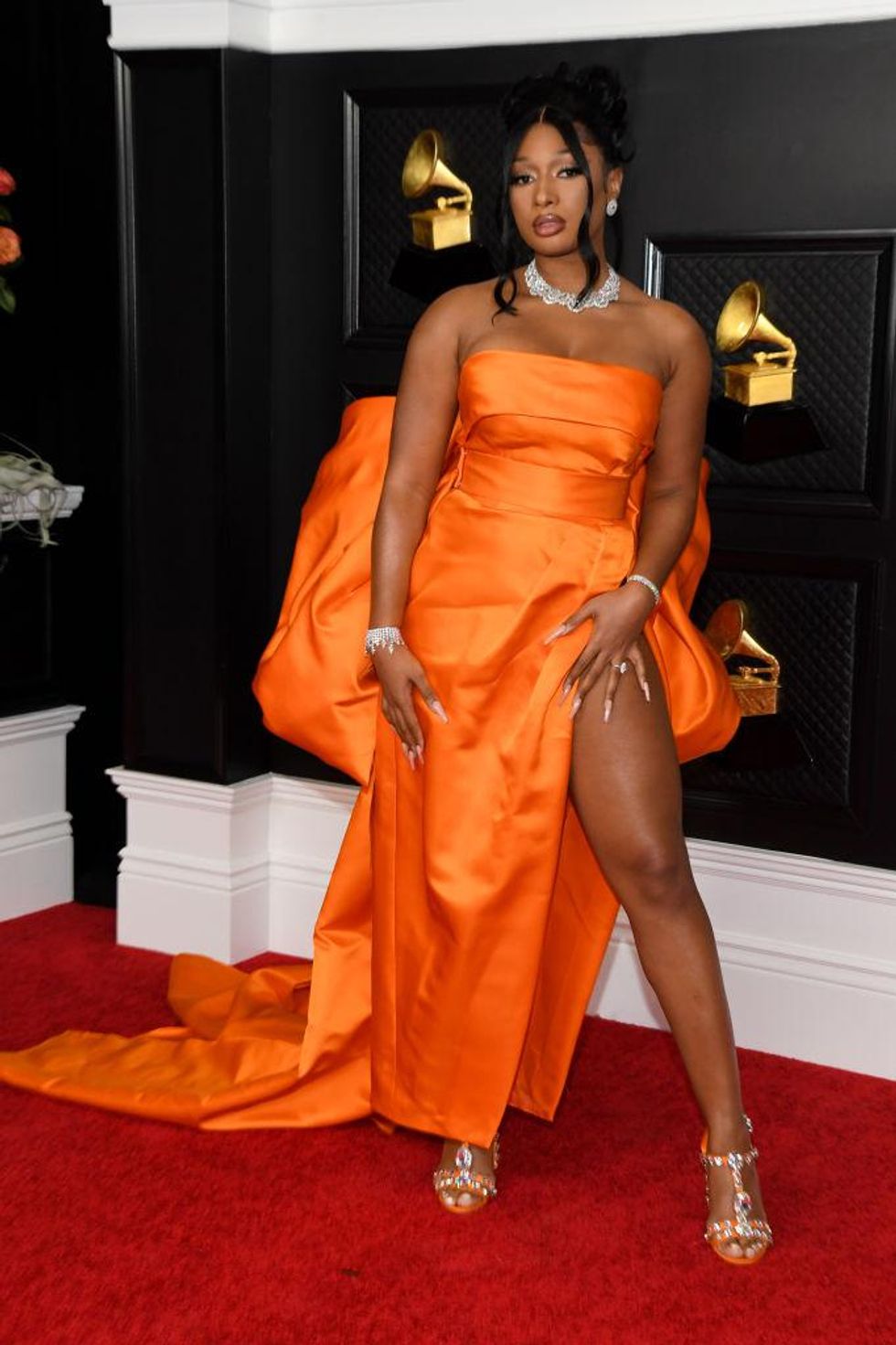 And then there was Noah Cyrus, in a very “the dress is wearing her” type of moment. Cyrus hit the carpet in the finale look from Schiaparelli Spring 2021 Couture courtesy of creative director Daniel Rosenberry. “It looked like she was stepping out of the most beautiful vagina ever,” Nightly Pop co-host Nina Parker apt remarked during E!’s pre-show in what was far and away the best commentary of the night. The two carpet Schiaparelli placements going to Beyoncé and Noah Cyrus feels unbalanced, to say the least.

DaBaby and Maren Morris also opted for D&G on Sunday night, as did Kaley Cuoco last week at the Critics’ Choice Awards and Angela Bassett just a week earlier at the Golden Globes. As Fashionista’s Tyler McCall mentioned in her recent deep dive on the status of D&G: “The brand is clearly not going anywhere, and neither are its critics.” 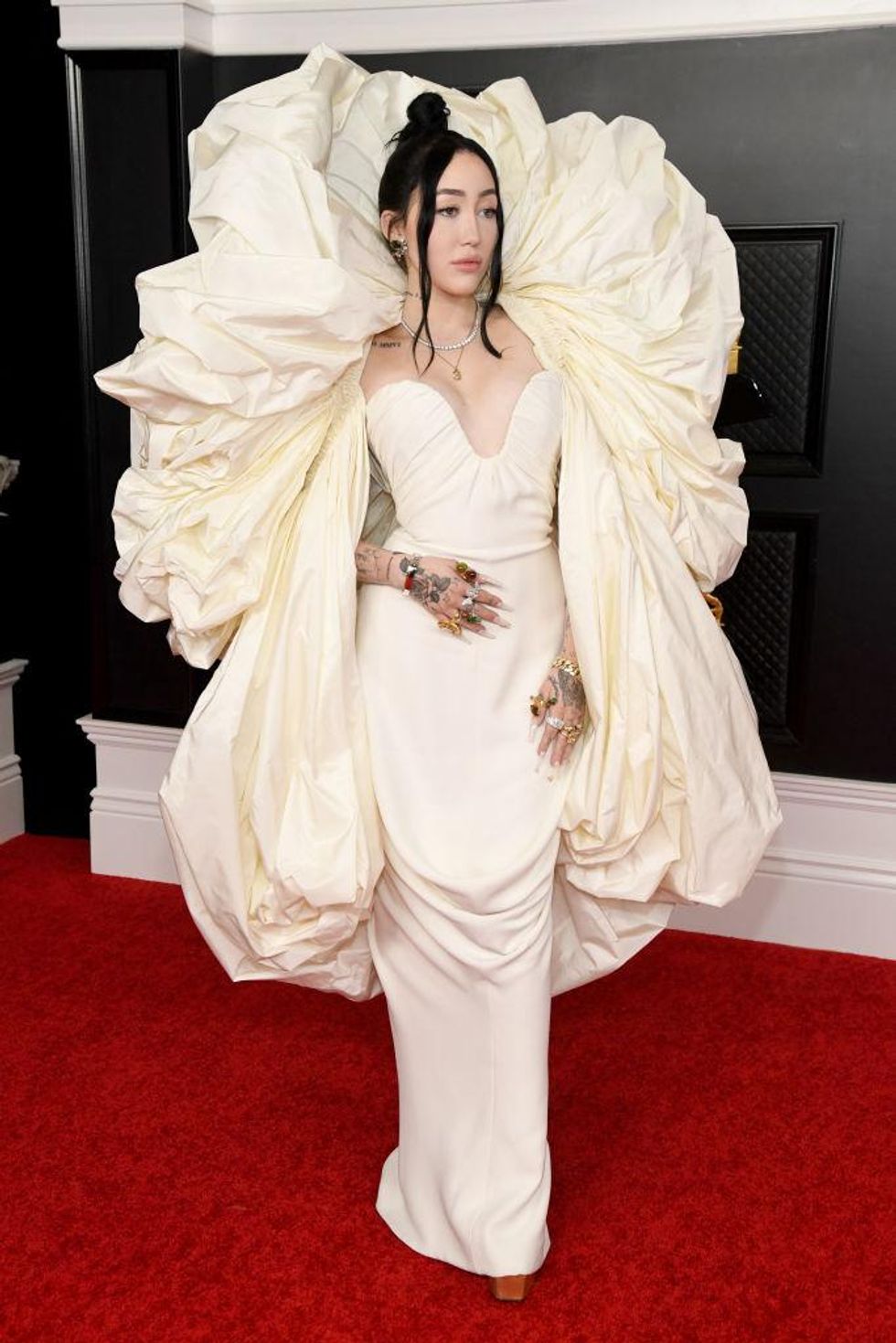 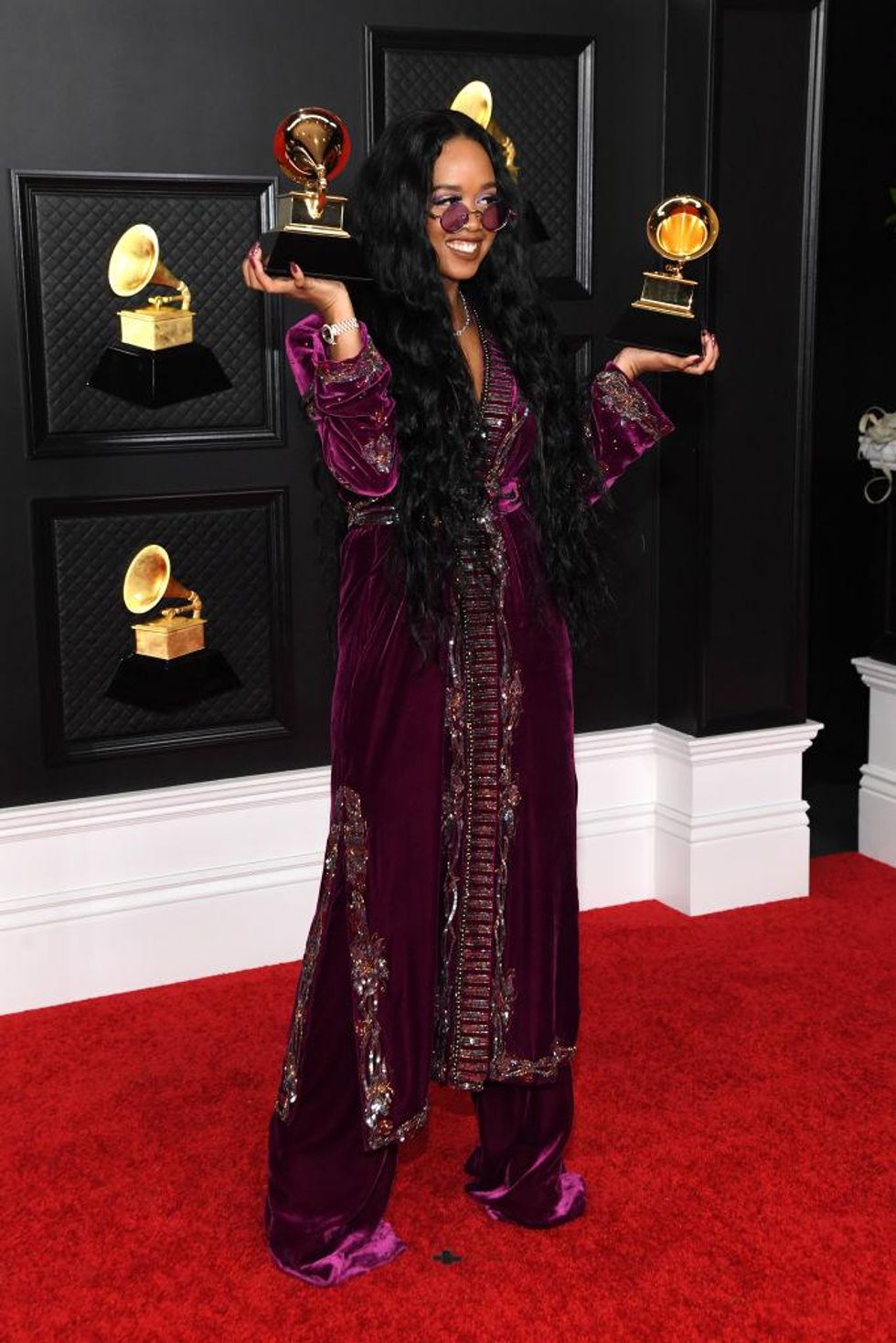 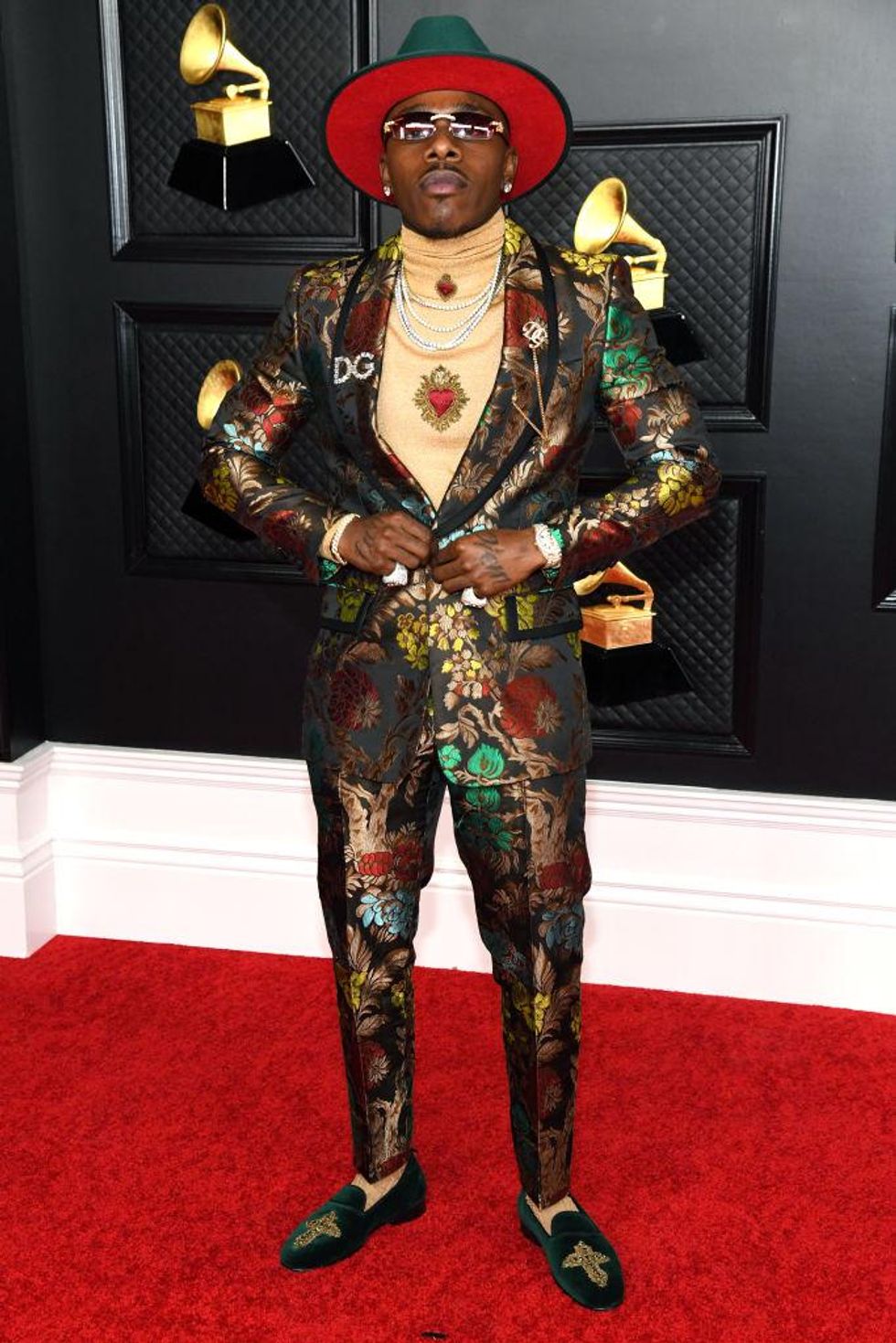 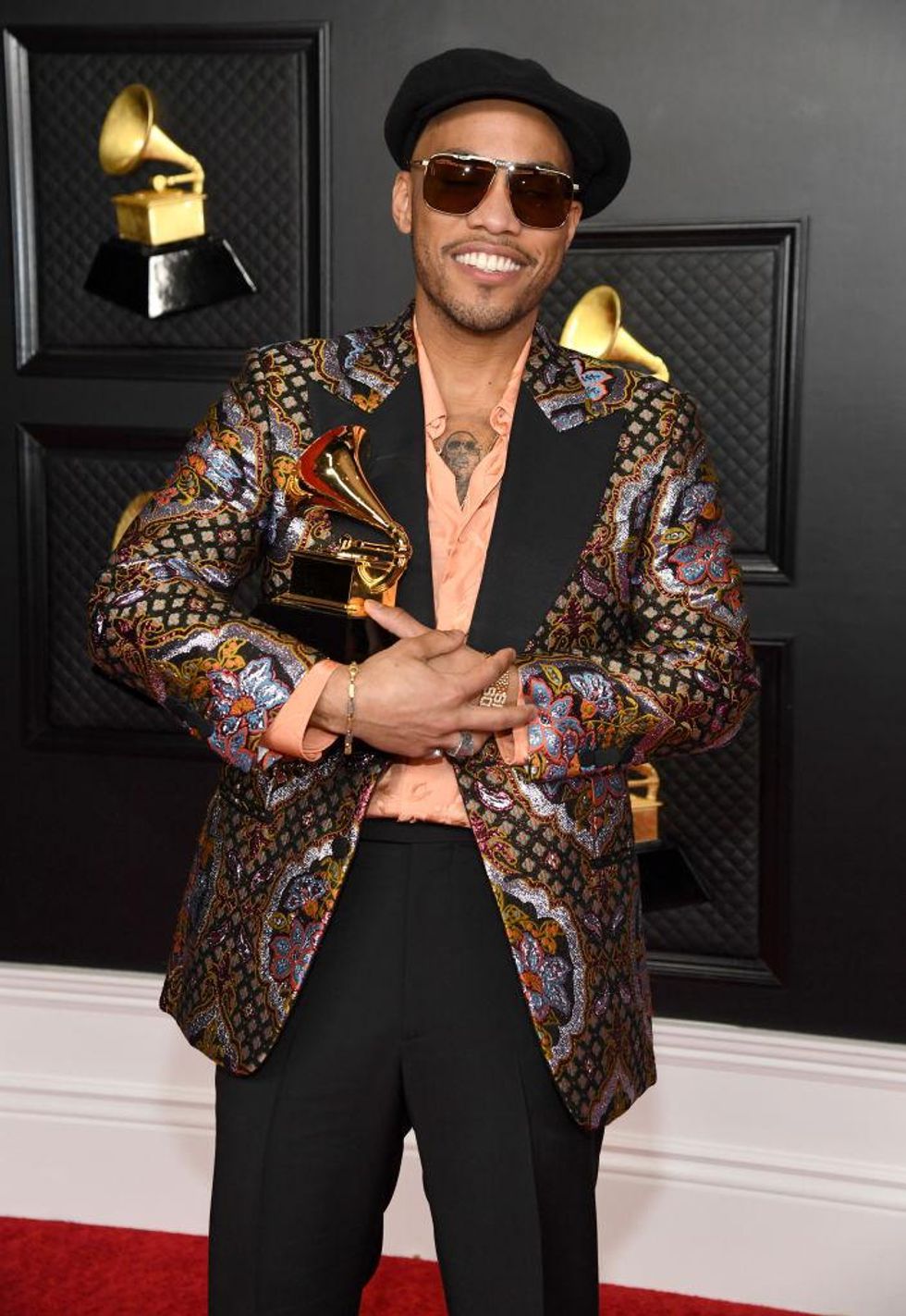 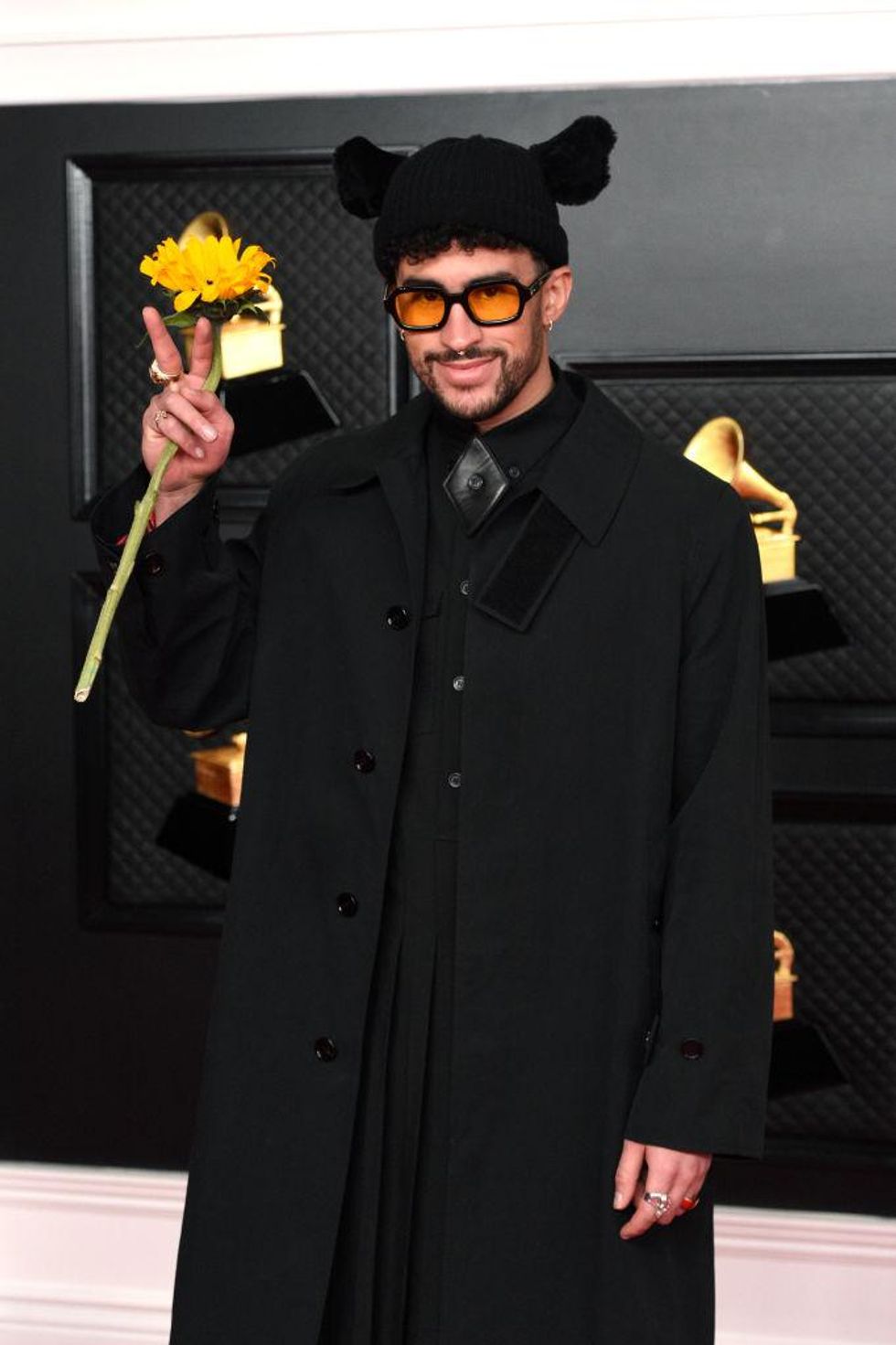 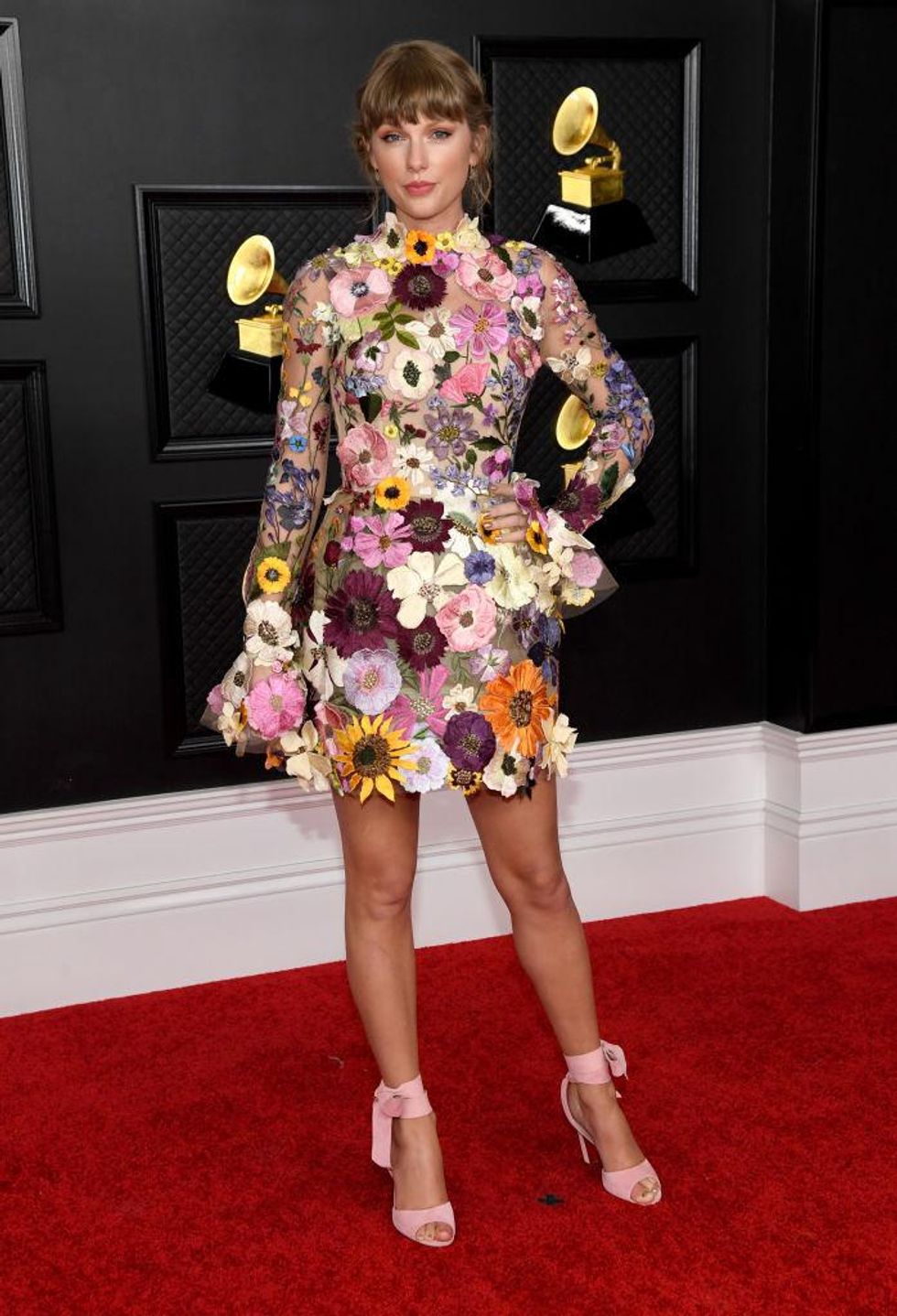 A lot of big stars in big brands makes for a relatively by-the-book red carpet affair. Was it nice to see a somewhat return to normalcy by way of a largely in-person event? Not no. Could the red carpet have committed to the masks seen throughout the ceremony? Quite yes. Thankfully, the night gave us Megan Thee Stallion and Cardi B, who teamed up with an unforgettable megamix of “Body,” “Savage,” “Up” and “WAP.” Scissoring on CBS? That moment alone made the night a worthwhile affair.

Welcome to “Wear Me Out,” a column by pop culture fiend Evan Ross Katz that takes a look at the week in celebrity dressing. From awards shows and movie premieres to grocery store runs, he’ll keep you up to date on what your favorite celebs have recently worn to the biggest and most inconsequential events.