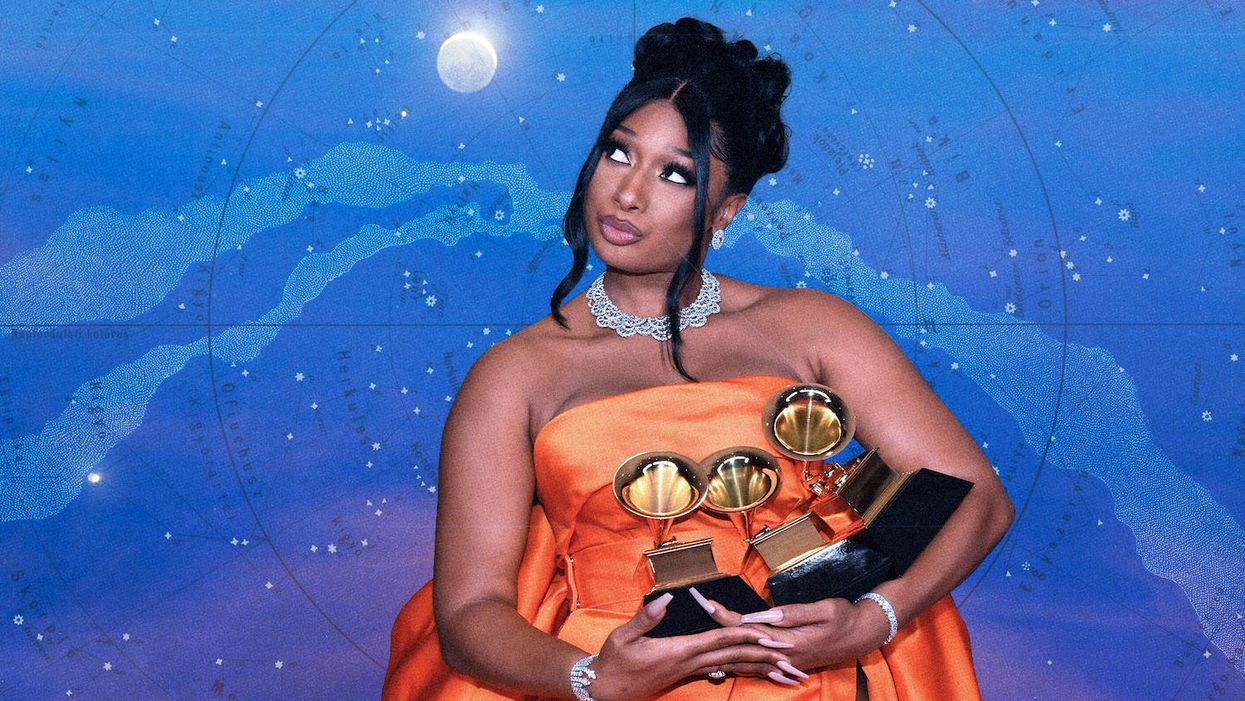 With new column In the Stars, popular TikTok astrologer Maryaam AKA @shawtyherbs looks for the astrological patterns in big pop culture events. From celebrity pregnancies and break ups to viral Billboard chart hits and blockbuster movies, every headline corresponds to the movements of the planets, and Maryaam explains how. Check out her corresponding TikTok videos over on PAPER’s account.

Over the past four years Megan Thee Stallion, real name Megan Pete, has taken the world by storm with her stellar rapping skills, iconic catchphrases and inspiring level of confidence. Megan’s fame started to skyrocket in 2019 when she released her powerful and catchy debut mixtape, Fever.

Megan Thee Stallion is a powerful woman, and her birth chart is reflective of that. She grew up with her Mom, Holly Aleece Thomas, a fellow rapper who went by the stage name of “Holly-Wood.” This relationship is reflected by Megan’s moon being in the sign of Leo in the fifth house: in astrology the moon can represent our mother and our relationship with her. The influence of Megan’s moon being in the fifth house in the sign of Leo is reflective of her mother’s musical abilities. This is because the fifth house in astrology can represent creative hobbies and artistic talents. Megan’s mom often brought her to the recording studio as a child to listen in on her sessions, having a significant impact and influence on Megan. This is one of the reasons as to why she grew to love music.

Related | The Astrology of Oprah

Megan started gaining notoriety in her home state of Texas and online by participating in cyphers, a type of freestyle rap that involves many people in a group taking turns to showcase what they come up with. Megan often cyphered with men, making her stand out from the crowd. This is reflective of Saturn being in her 11th house, in a sextile aspect to Venus. “Aspects” in astrology refer to the angles and energies two planets have with one another. Sextile aspects are positive and harmonious, and can help us to expand and develop for our greatest good. Saturn is a planet that can represent men, male energy and longevity. The 11th house can represent groups, and support from large groups of people. Venus is a planet that represents women, female energy and music. So, Venus in this context represents Megan and her music. This harmonious sextile aspect helped Megan to acquire an abundance of support from people in her hometown, and people online. Furthermore, her cypher videos, and her own personal videos that she uploaded online helped her to gain long-term support from her fans.

Megan Thee Stallion started to gain a large amount of recognition and fame in 2019 when Fever mixtape dropped. At this time, Pluto was transiting her ninth house and being conjunct to her natal Neptune in the ninth house. Natal Neptune refers to the placement of Neptune in her birth chart. Conjunction aspects refer to the energies of two planets working together in unison, creating a more powerful force together.

Pluto is the planet of power, rebirth and transformation. Neptune is a planet that represents beauty, glamour and artistic fame. The ninth house represents publishing and publications. This conjunction is reflective of her receiving recognition and fame from publishing her mixtape! Furthermore, it’s also reflective of her embarking on a journey of her life transforming drastically as she found herself becoming a powerful and glamorous celebrity that other people look up to.

Megan Thee Stallion has acquired an abundance of success since then. She won three Grammys on Sunday night. This is reflective of Mercury transiting her 11th house and being conjunct to her natal Sun in the tenth house. Mercury is a planet that represents our communication skills and the way we speak; it can also represent rapping, being able to rhyme words together, and making a speech in this context. The 11th house is reflective of making her speech in front of a large group of people. This is because the 11th house represents various things such as large groups. The Sun in astrology can represent recognition, and the tenth house represents awards. Hence Megan picking up Grammys for “New Artist”, “Rap Song” and “Rap Performance.”

Related | The Astrology of Daft Punk’s Break Up

Furthermore, Jupiter is also transiting Meg’s tenth house. Jupiter is the planet of good luck, fortune, expansion and abundance. That energy is reflective of Megan winning not one, not two but three Grammys on Sunday! Jupiter’s energy expands the themes of the house its transiting in, and can provide us with an abundance of blessings.

Megan’s life trajectory has been nothing but incredible. She’s paved the way for so many other women in the industry to make a name for themselves, while also inspiring other young women to feel comfortable in their skin. In just a few short years she’s made a significant impact on the rap industry for the better with her stellar rapping abilities and talents. We’re so incredibly proud of her, and we can’t wait to see what she does next.