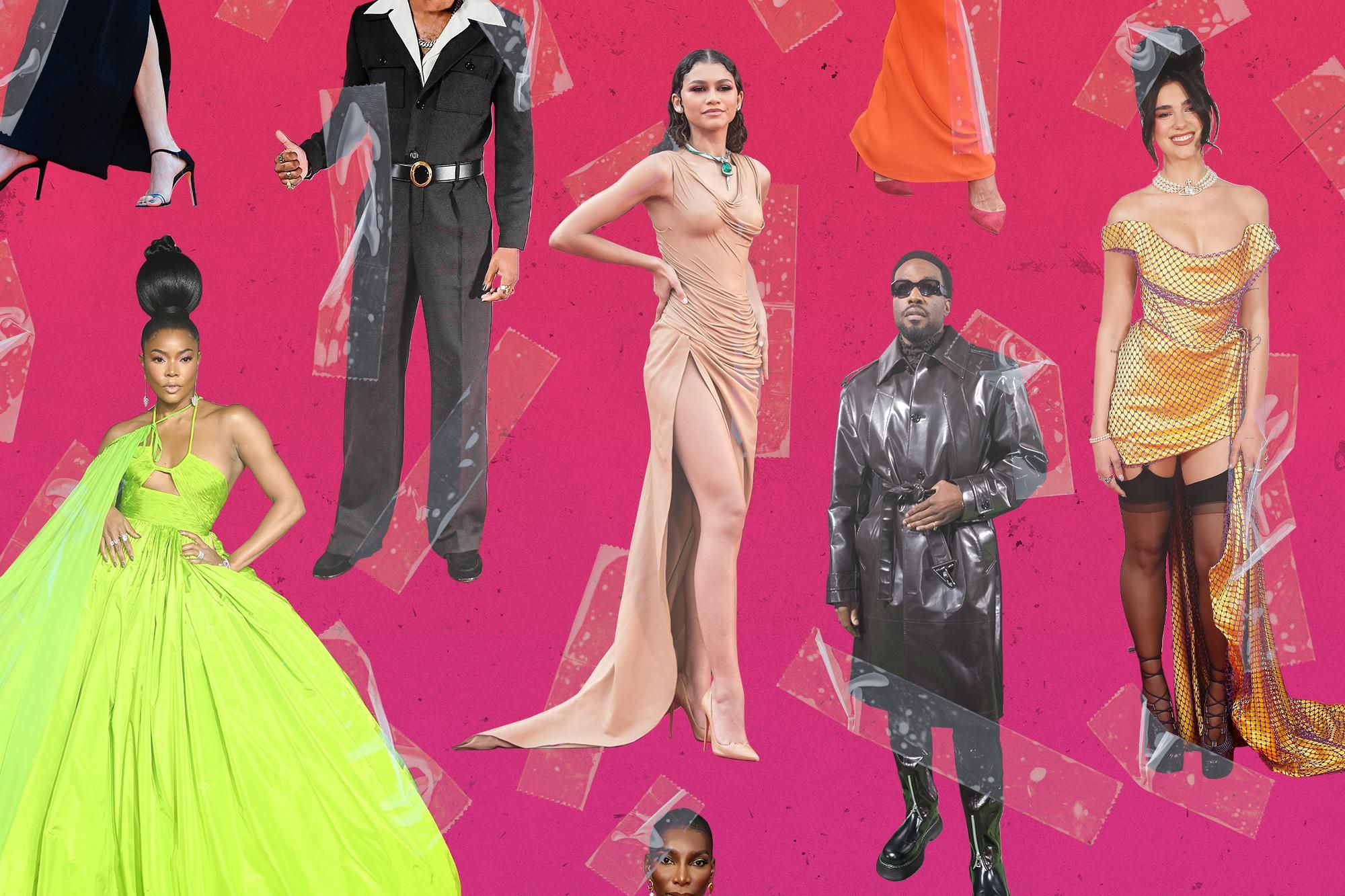 Well, that happened: 2021. You don’t need me to remind you about a year that will likely best be forgotten by many. But some good things did happen! Remember the butterfly that landed on Naomi Osaka during her Australian Open match? Or how about the ascension of Amanda Gorman? What about every look Zoë Kravitz was seen in when she was papped arm in arm with her maybe-boyfriend Channing Tatum? See, there was some good.

But Kravtiz’s was far from the only one managing to catch attention for delivering in the style department. In fact, this year was chock full of style stars that seemed determined to bring it, Gabrielle Union/ Kirsten Dunst-style. And as a result, it was brought. Below, 25 of the best looks that 2021 gave us.

Symone made her work room debut on the 13th season of RuPaul’s Drag Race (which she’d go on to win) in a dress designed by Michael Brambila and made from Polaroids of herself (but of course), akin to a design Gisele Bündchen wore for ESQUIRE’s October 2004 issue. This entrance secured her the win for me.

From the moment legendary author and fashion journalist André Leon Talley was announced as the new face of UGG, it was clear that the stun gun had been set to 100. And deliver they did, with these enchanting images.

No red carpet premiere? No bother for Anne Hathaway, who decided to stage an at-home photo spread complete with not one, but three looks. But it’s this bronze sequin Atelier Versace and it’s plunging neck combined with a high slit that really sell the fantasy. 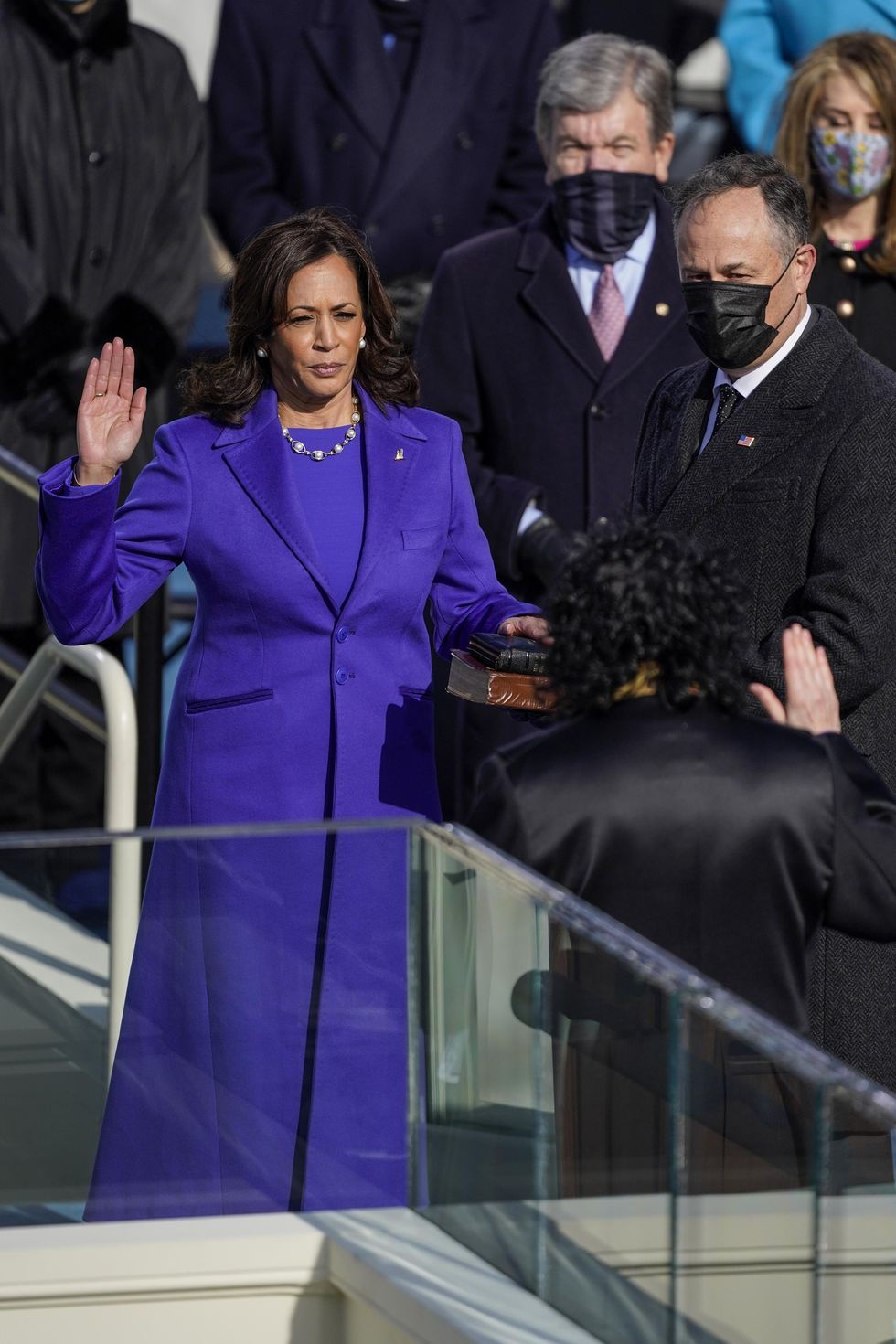 For her historic swearing in as Vice President, Kamala Harris opted for a custom purple tailored coat and dress by CFDA 2021 American Womenswear Designer of the Year winner Christopher John Rogers. In successfully struck the balance of bold without overwhelming, while signaling Harris was here to serve more than just the American people (I’ll see myself out).

The crystal face mask Meredith Marks wore on the Season One finale of The Real Housewives of Salt Lake City proved an immediate camp classic. More of this energy. 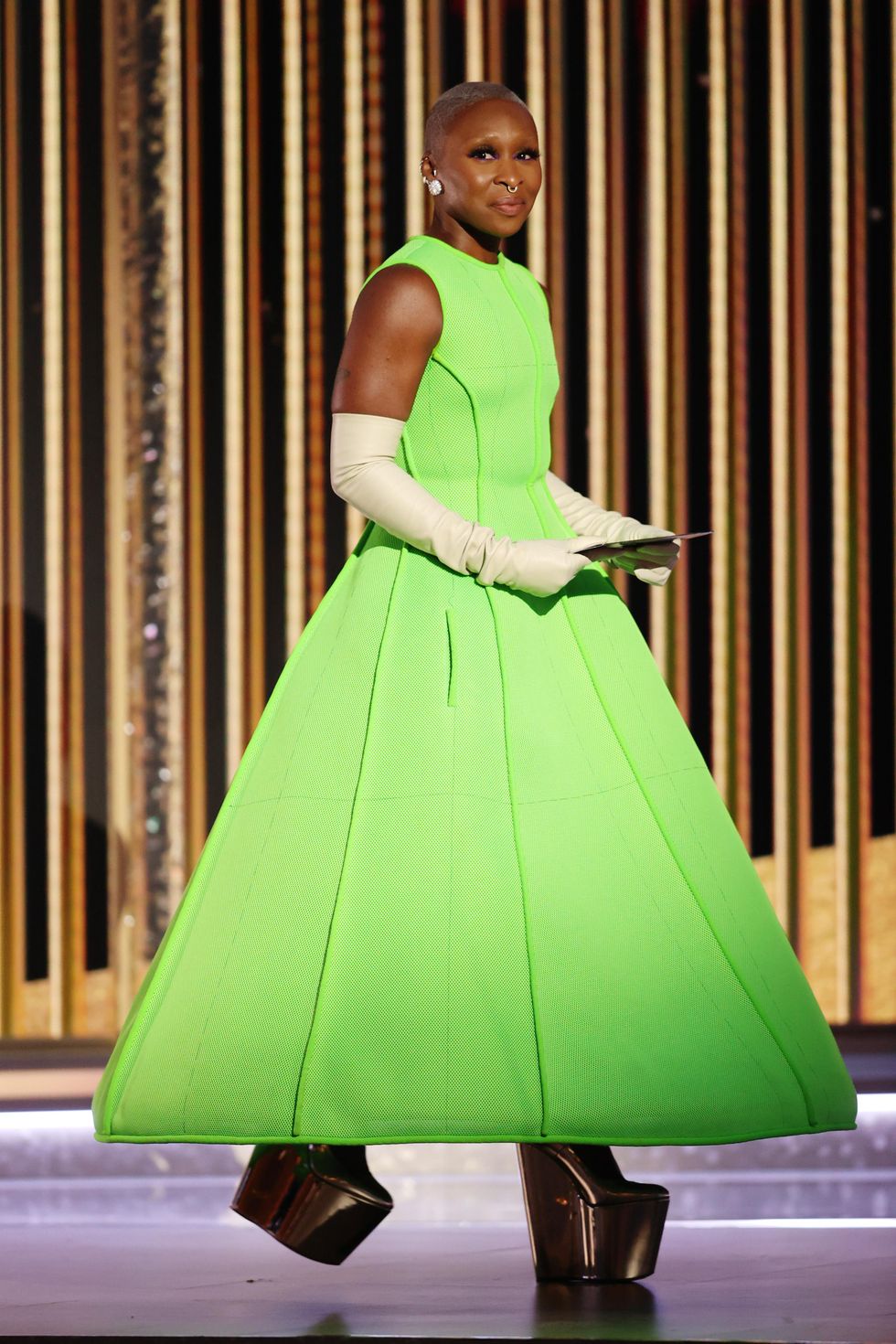 Any best dressed is remiss to not include Cynthia Erivo, peerless in her chameleon-like ability to wear just about anything — and wear it well. It’s almost as if takes the act of dressing as serious as she would one of her award-winning performances. And we love her for it. Picking a favorite is hard, but this electric green Valentino Spring 21 Couture look, complete with sky-high silver heels) from the Golden Globes is going to clinch it. I mean, just look at it! 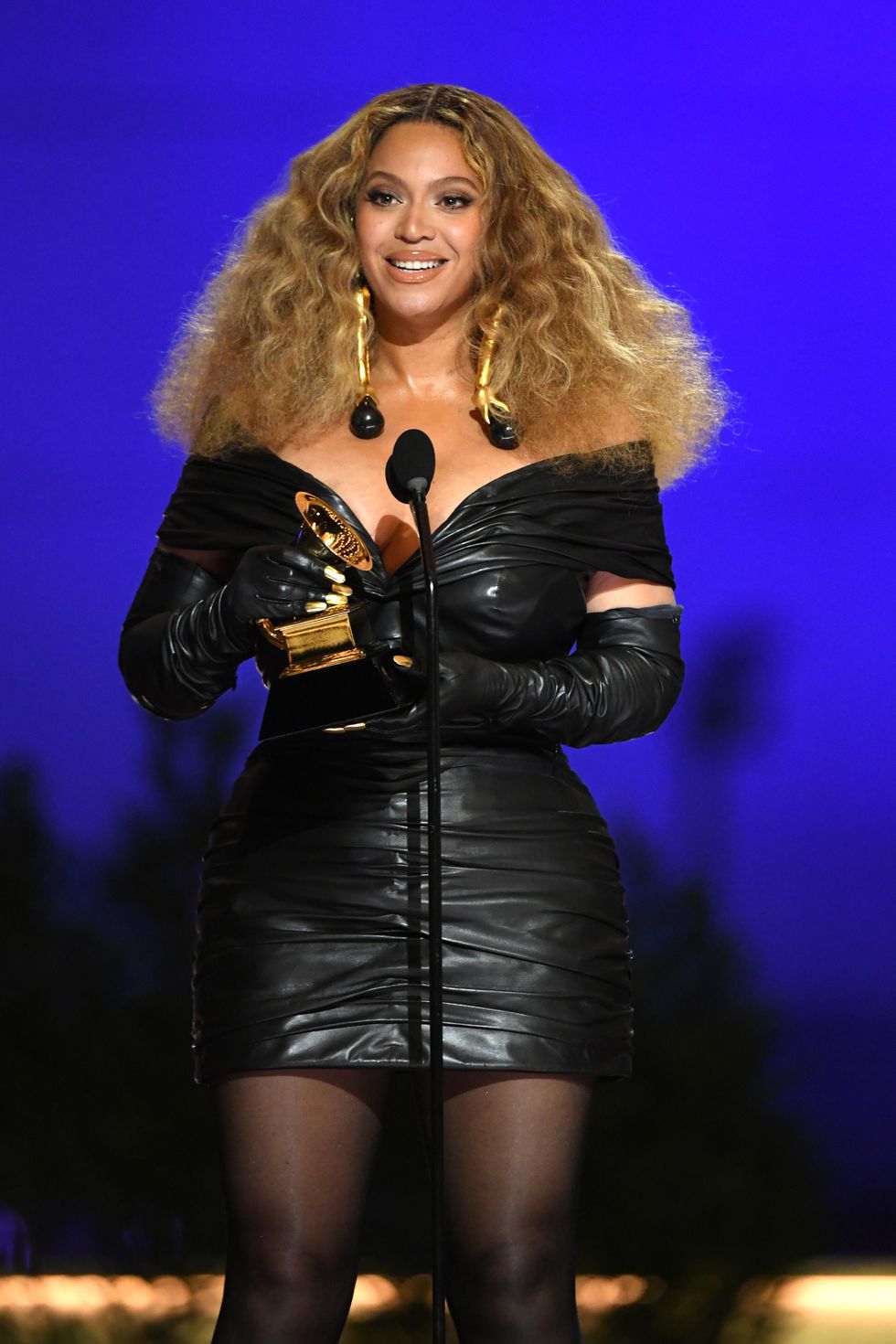 Beyoncé in a Schiaparelli custom black gathered leather mini dress and gloves with trompe l’œil gold fingernails at the Grammys? What more is there to say. This look says it all. An ode to good tailoring and great details (who doesn’t love a plunging v-neck), LaKeith Stanfield gave us ’70s realness with a modern day twist at the Oscars. 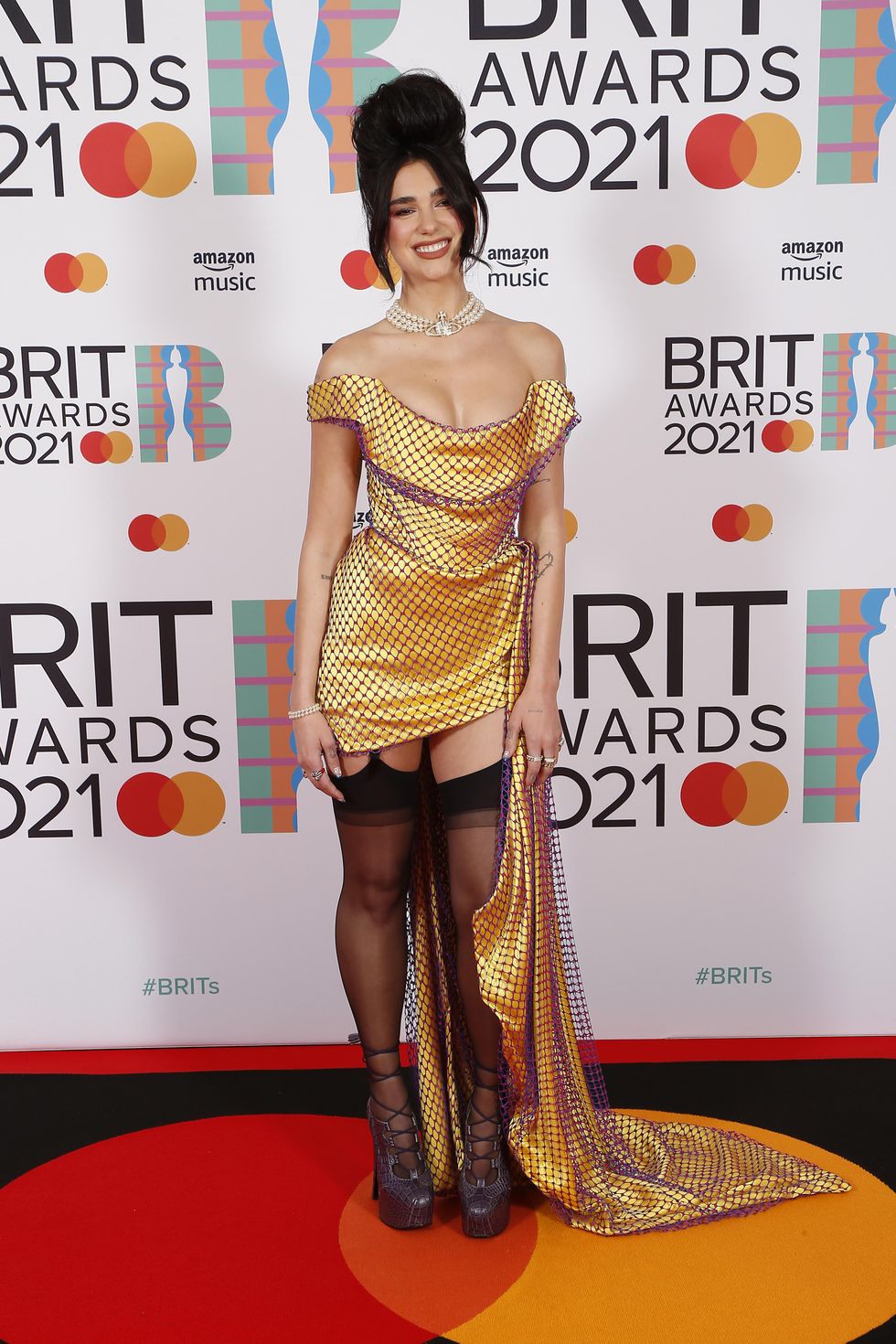 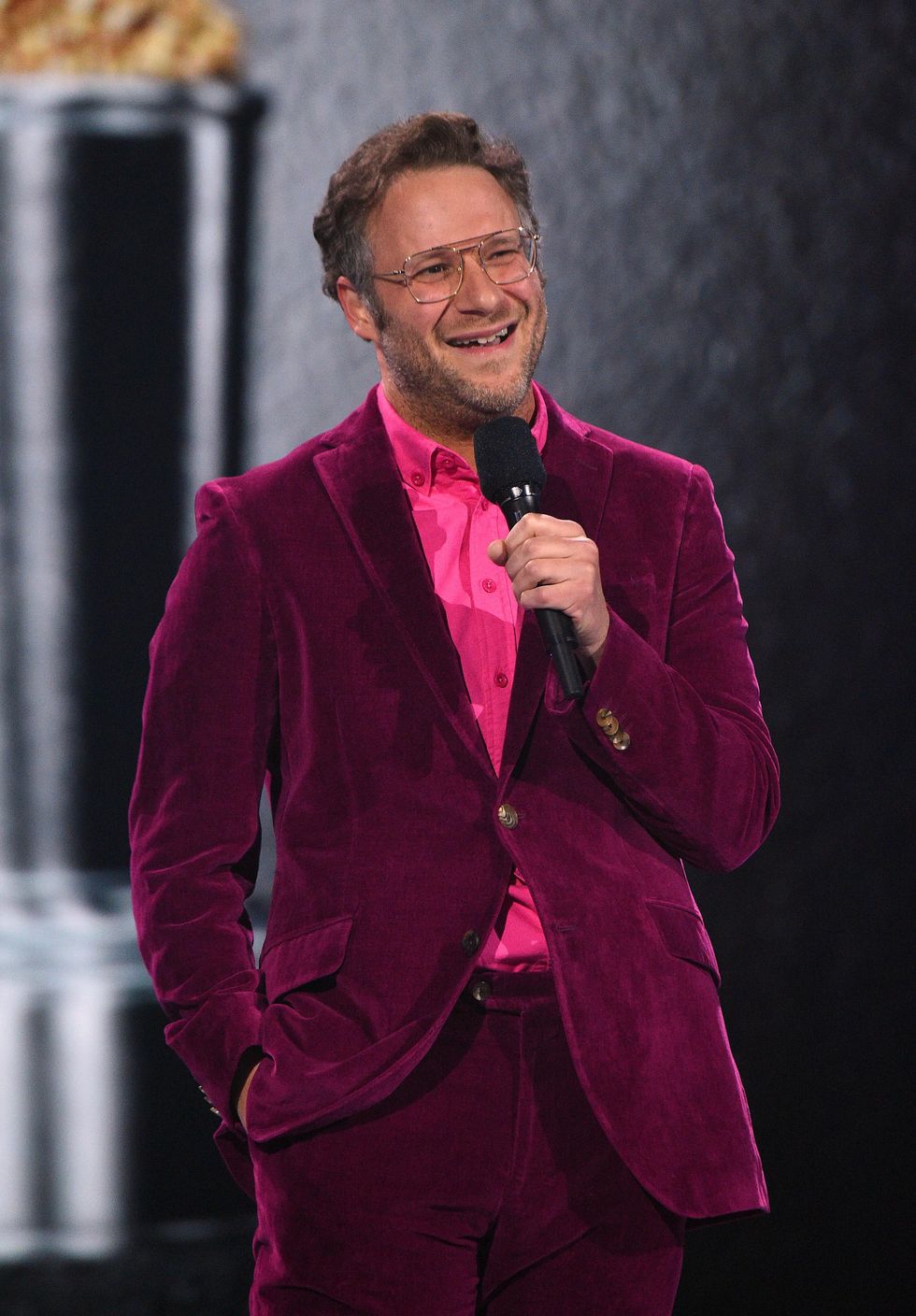 At the MTV Movie & TV Awards, an award show name that will never no be an absolute clunker, Seth Rogen did what had to be done in a toasted plum velvet Etro suit paired with an electric pink shirt. Everybody say, “Thank you, Seth Rogen.” 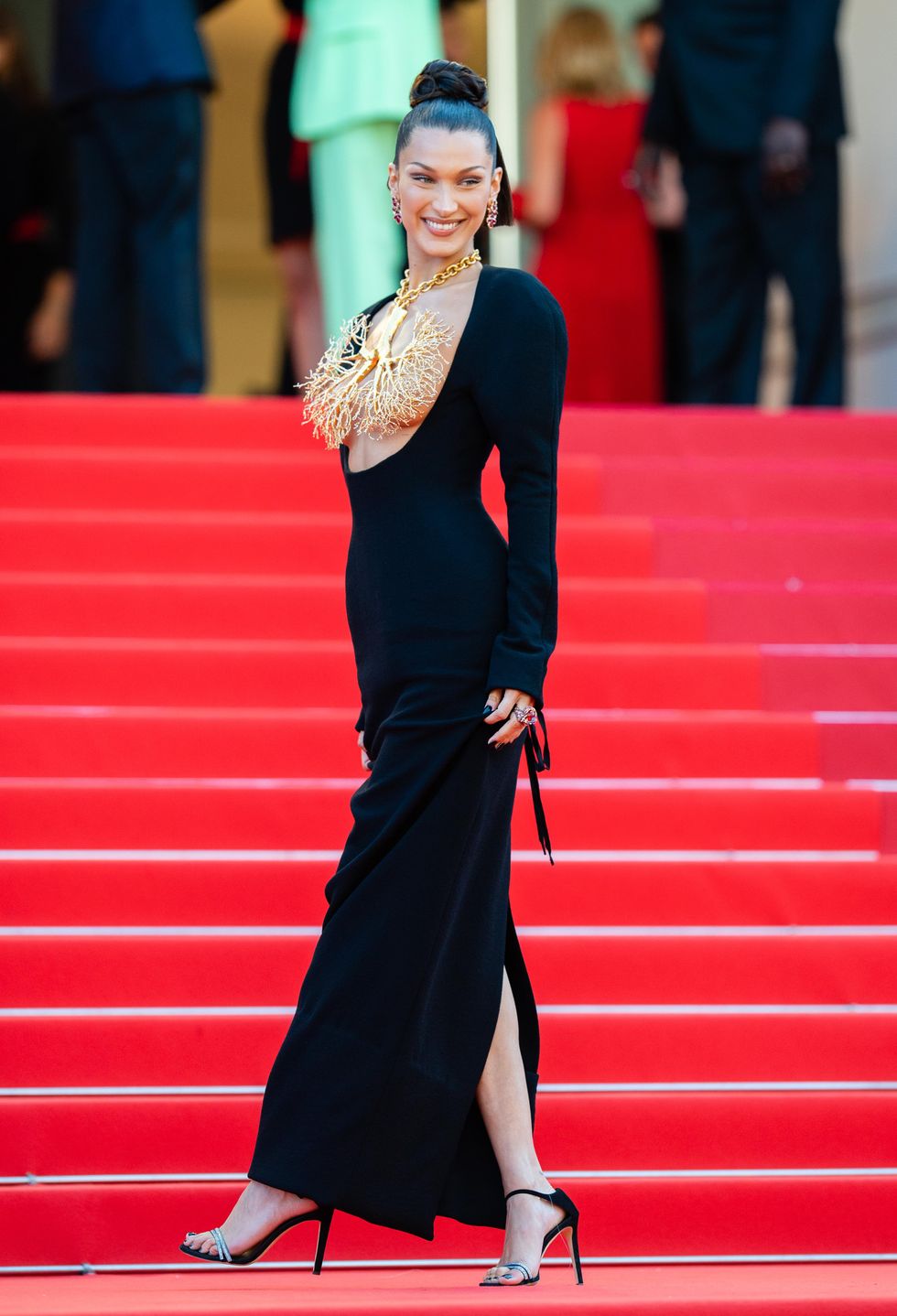 Breathtaking is an understatement. Bella Hadid asserted her main fashion girl status with this Schiaparelli Fall 2021 couture look at the Cannes Film Festival. 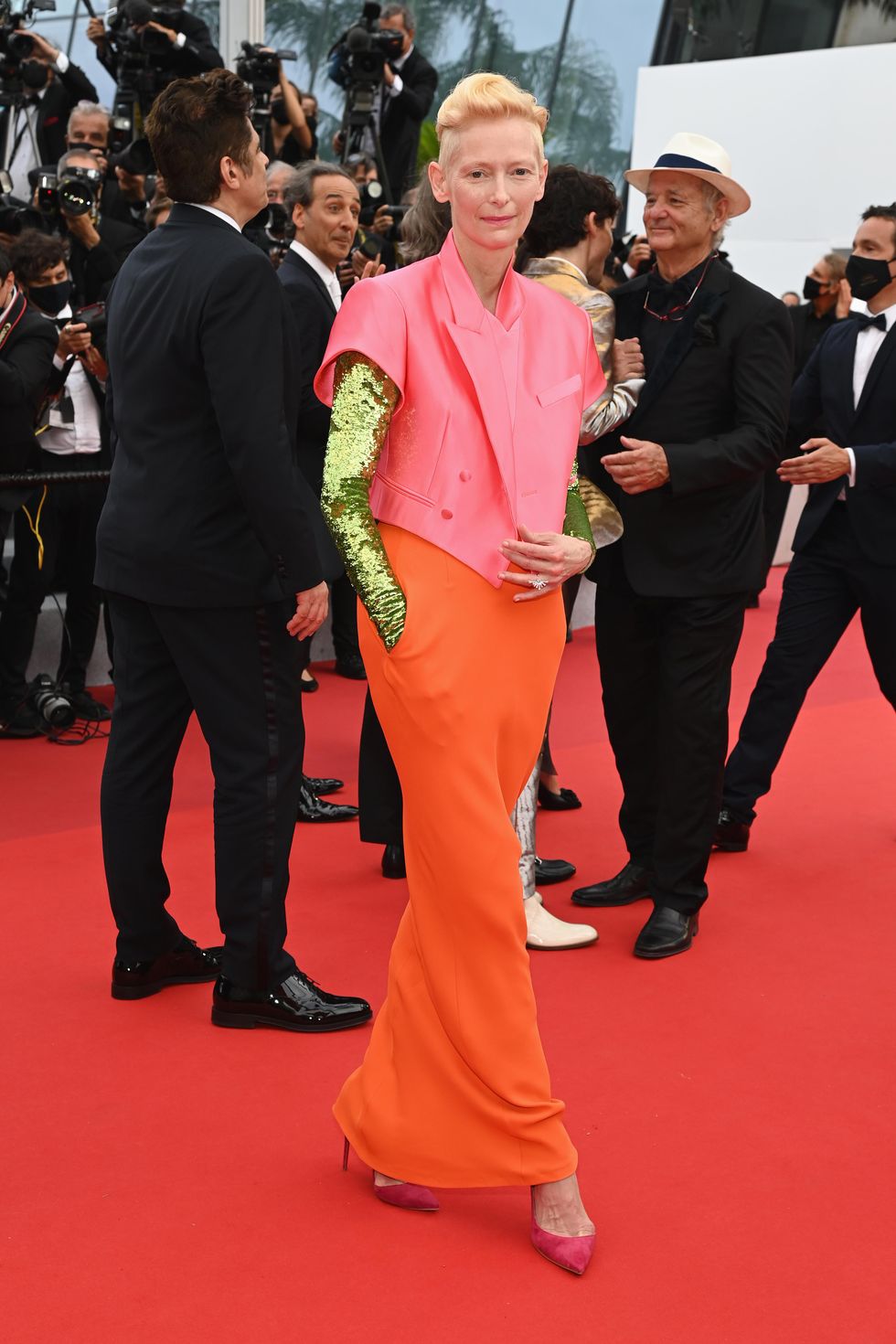 Who doesn’t love a sequined sleeve? In a look that no mortal could pull off, Goddess Tilda Swinton wore this custom Haider Ackermann look to the Cannes premiere of The French Dispatch. Choosing one Zendaya look is a fool’s errand, but this custom Balmain sculpted leather gown at the Venice Film Festival has to be it. Dictionary definition of a movie star. 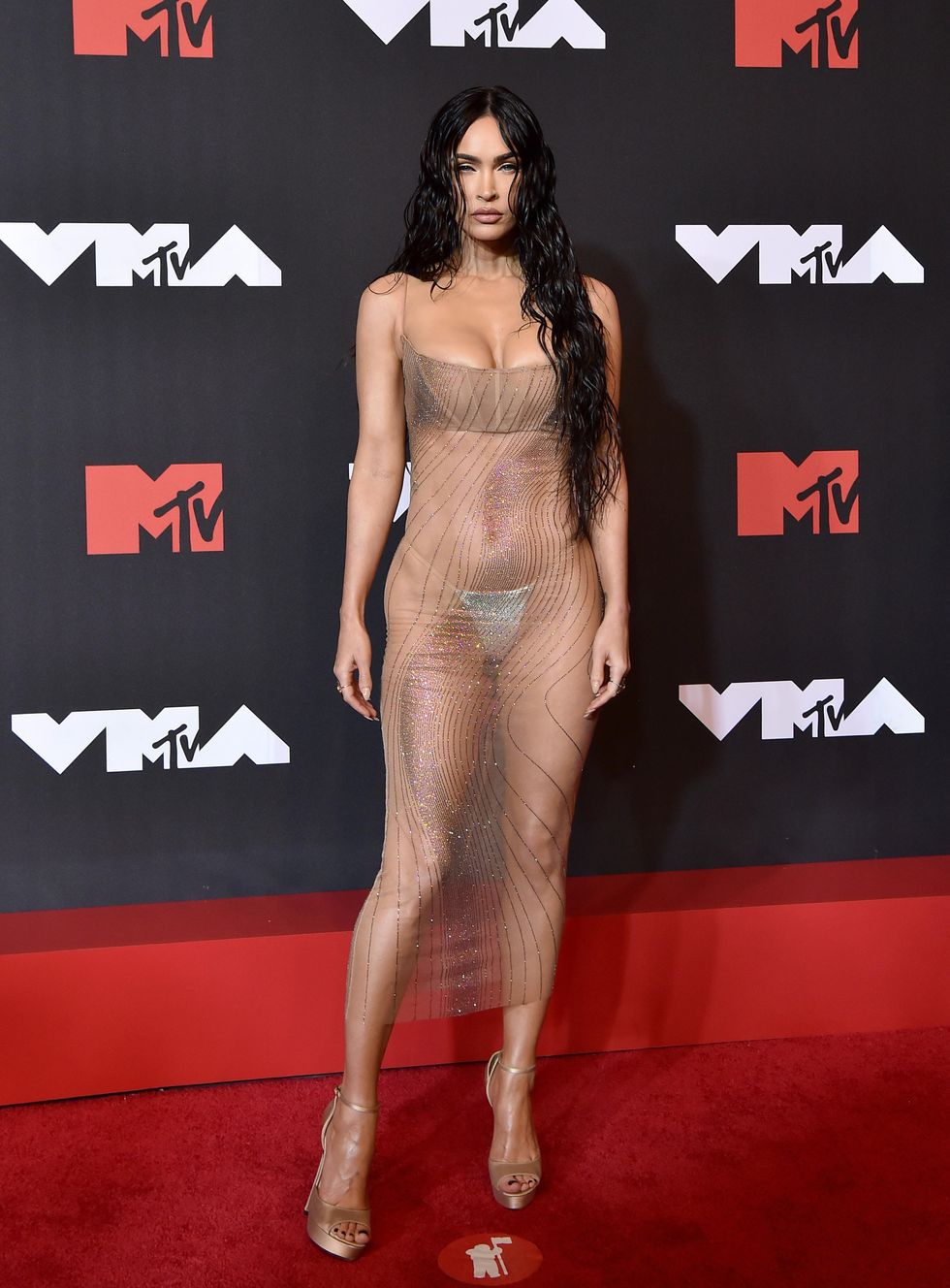 Asserting the see-through dress’s worth was Megan Fox at the VMA’s in a completely sheer Mugler dress. Textbook definition of understanding and excelling at the assignment. 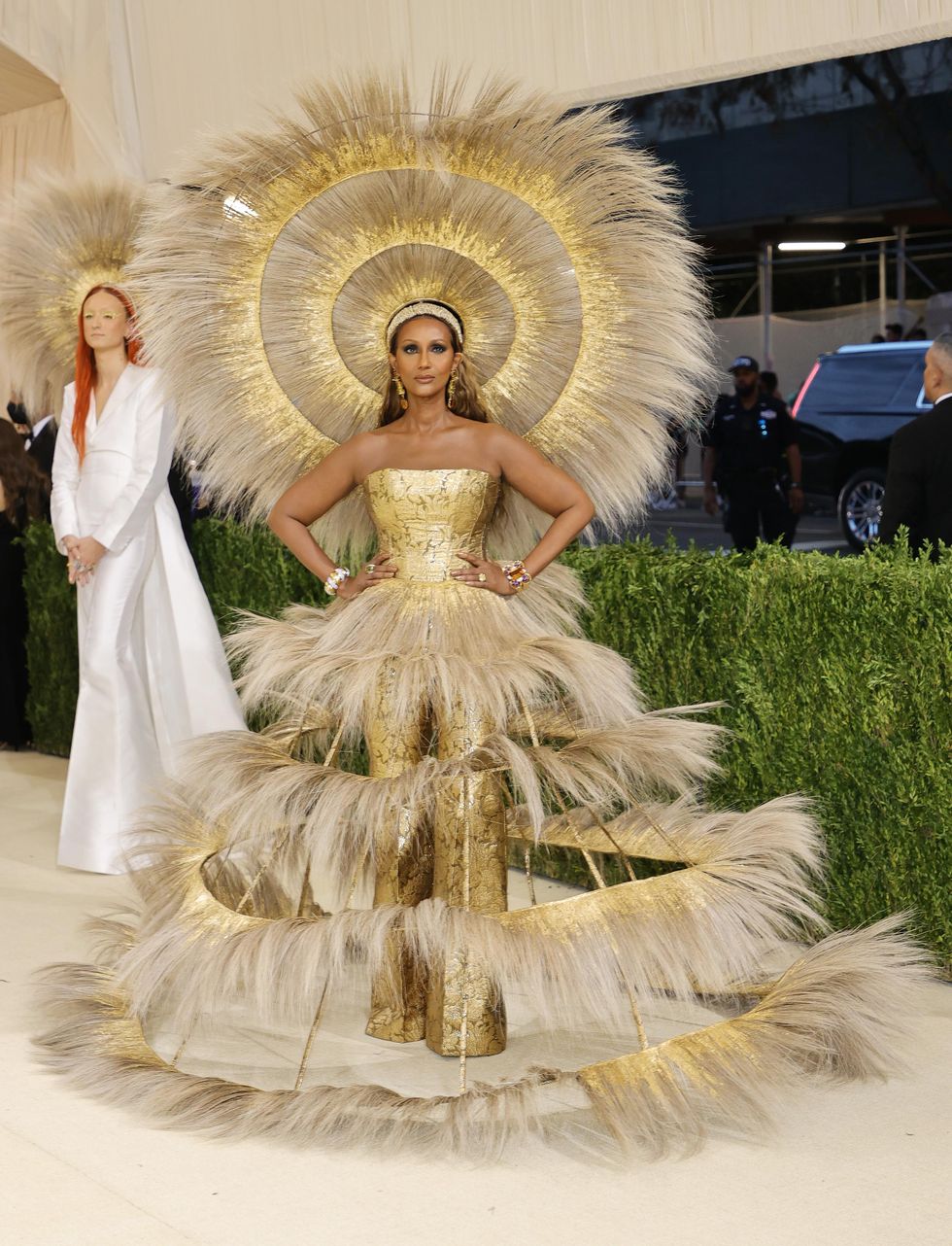 A jacquard gold bustier. Flared trousers. A crinoline skeleton bedecked with layers of gold leaf-covered feathers. A feathered headdress. If designer Harris Reed’s goal was “get Iman on the Best Dressed list,” then mission quite accomplished. 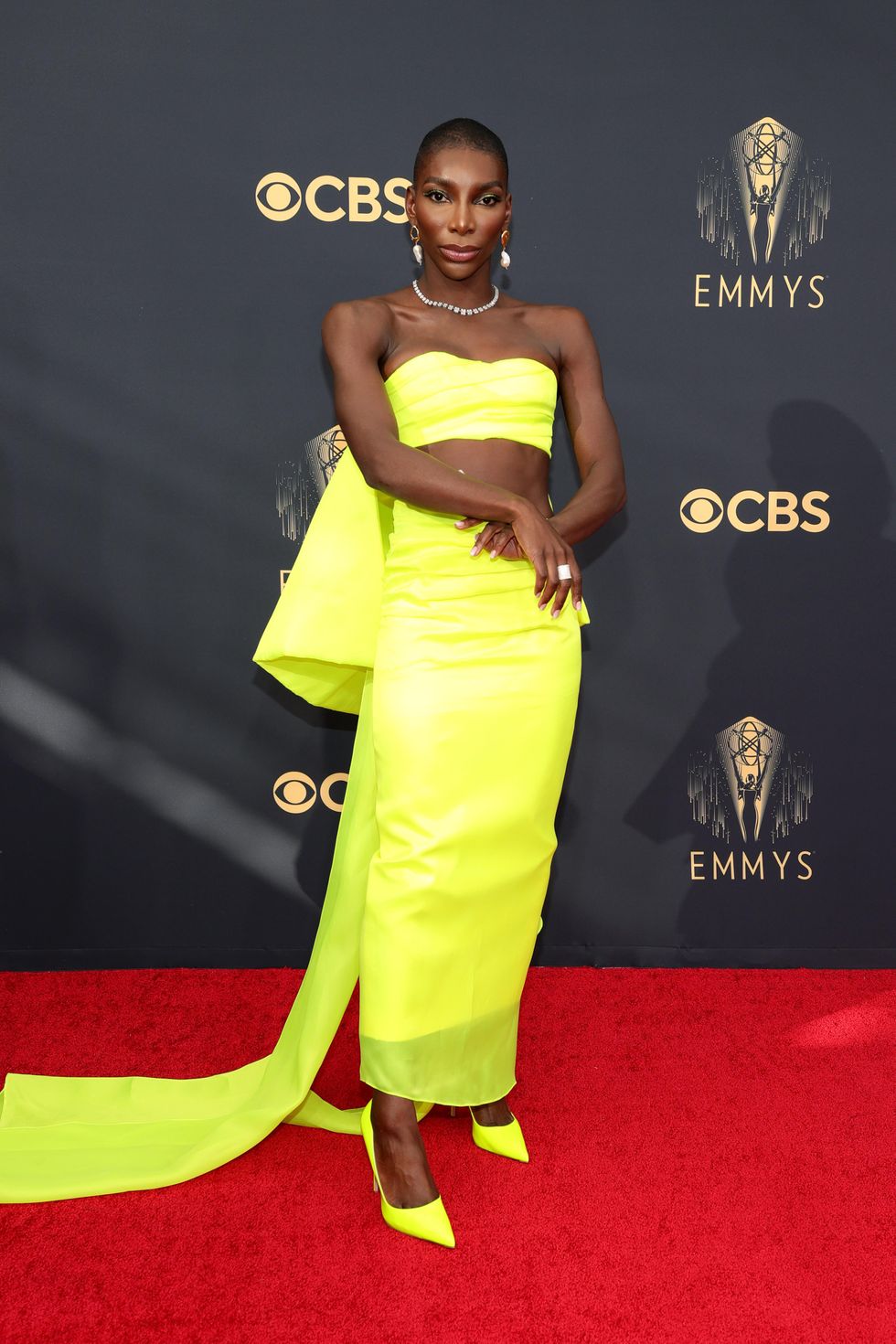 Michaela Coel picked up her Emmy win for Outstanding Writing for a Limited or Anthology Series or Movie looking every bit a winner in this custom Christopher John Rogers bralette and draped column skirt. 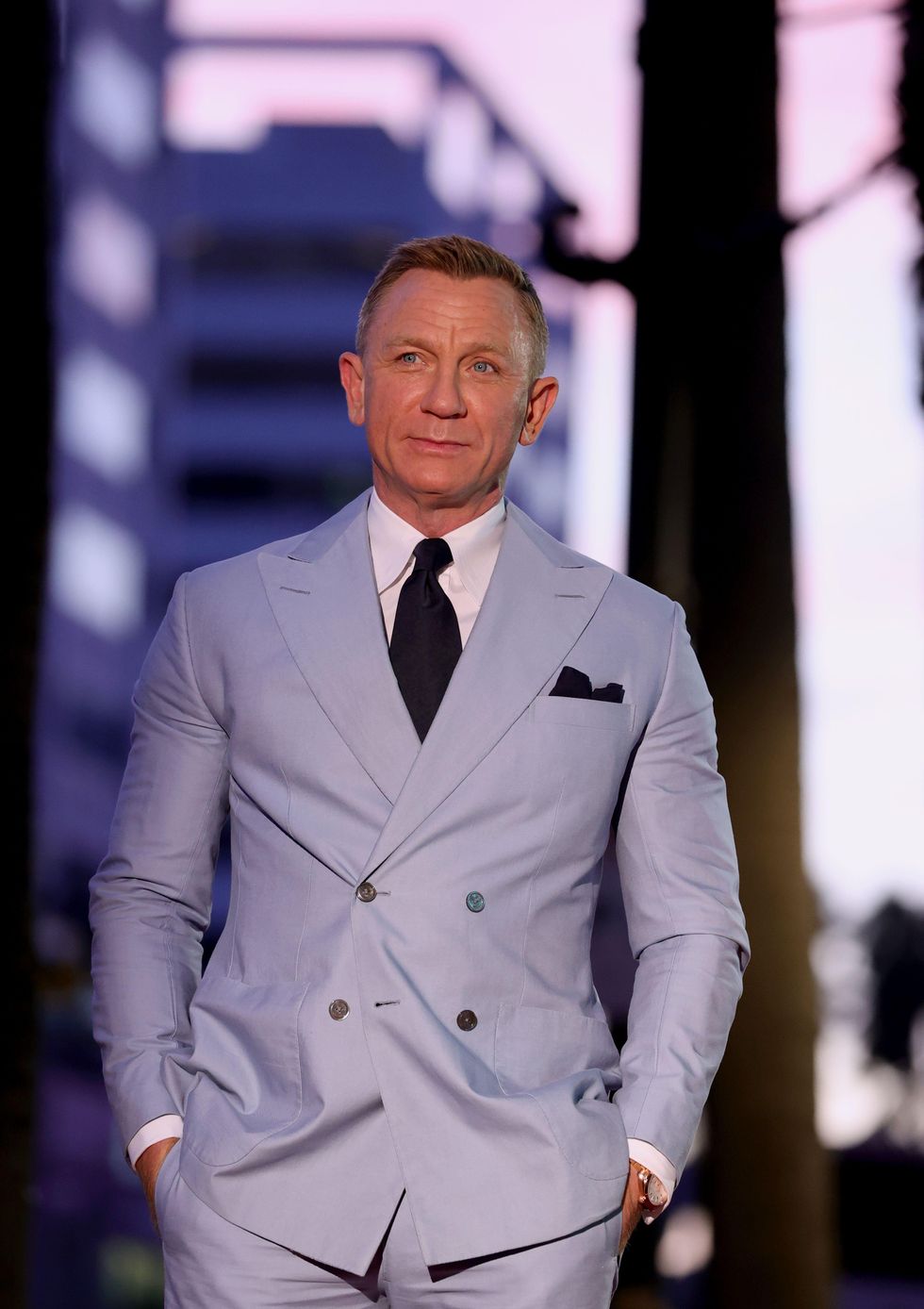 When Daniel Craig donned this raspberry velvet dinner jacket from Anderson & Sheppard, a bespoke shop and haberdashery based in London, you can best believe I was shaking. Quite possibly still am.

Saturday Night Live’s breakout star and noted heartthrob Bowen Yang earned his spot on the list with this hot pink look from this sadly cut for time sketch “Costco Meeting,” from the season’s Kim Kardashian-hosted episode. You simply can’t go wrong in hot pink latex shorts and a match crop top under a jacket. 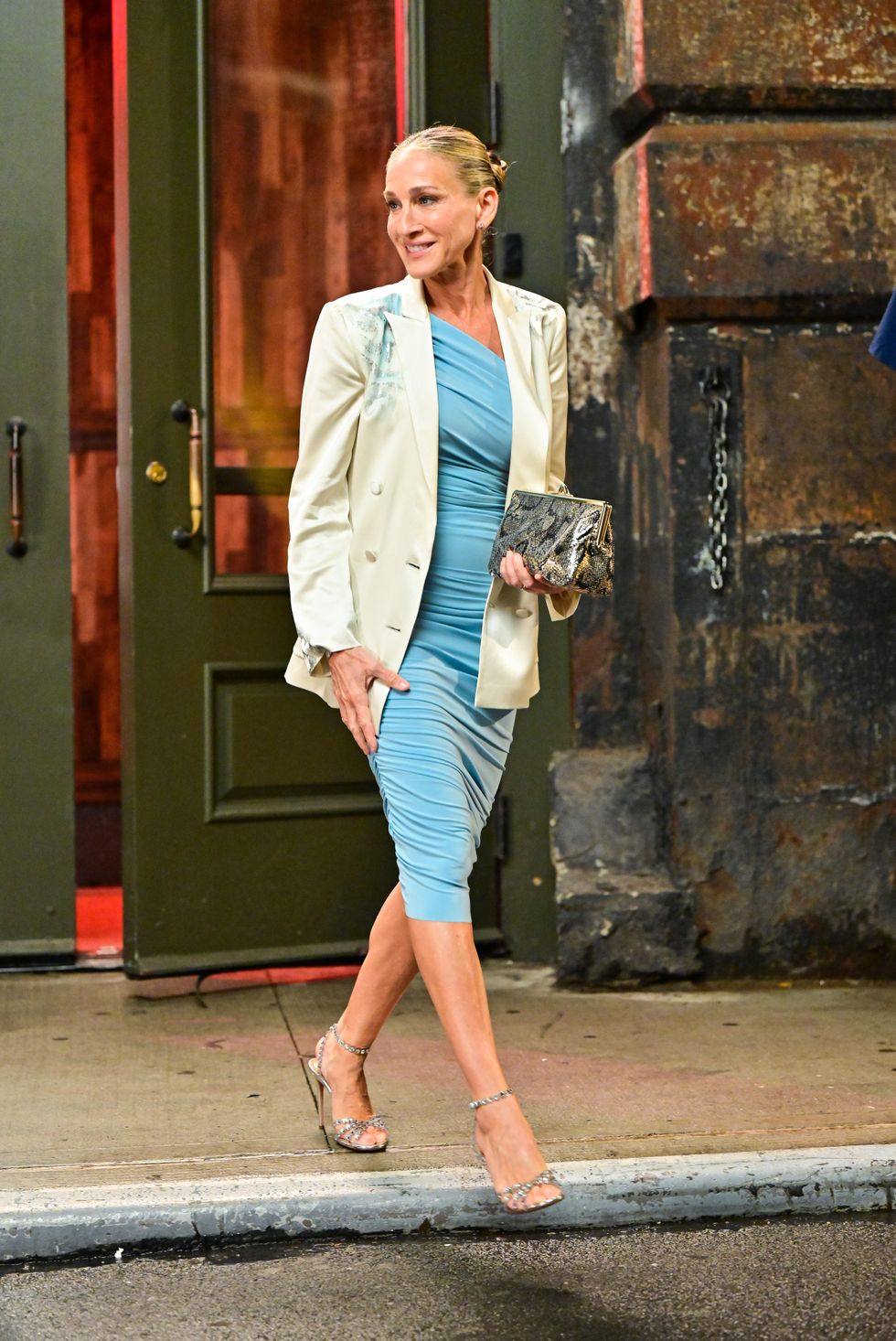 Of all the spoiled And Just Like That looks we were treated to, none felt more quintessentially Carrie than this baby blue Norma Kamali body-con dress.

…Special shout out to anything Zoë Kravitz wore while being papped with Channing Tatum. 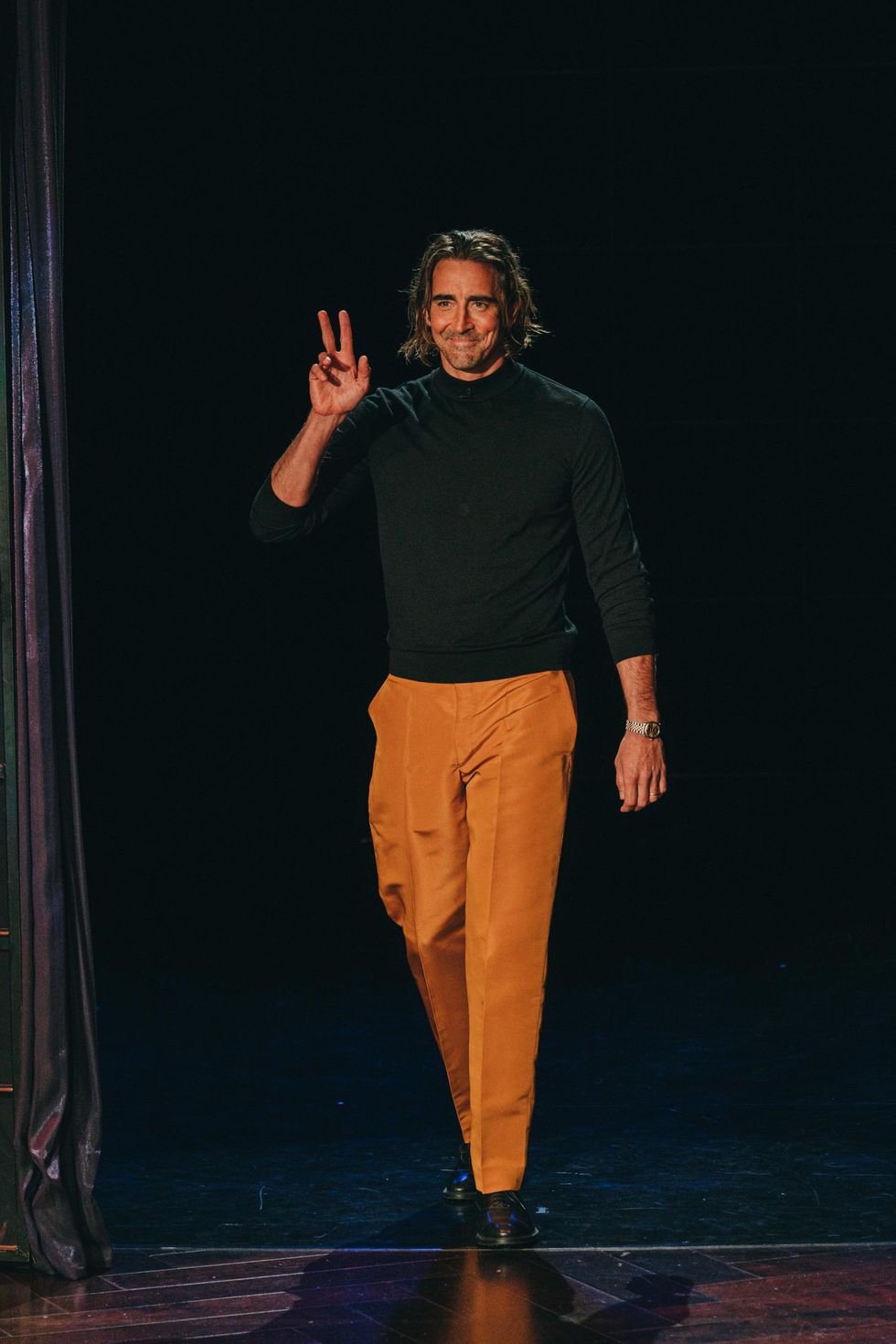 6’5” actor Lee Pace wore this Zegna top paired with bespoke burnt orange silk faille trousers (his hip bone generously on display) on The Late Late Show With James Corden, where he revealed that he built his house by hand. A moment most pleasing. 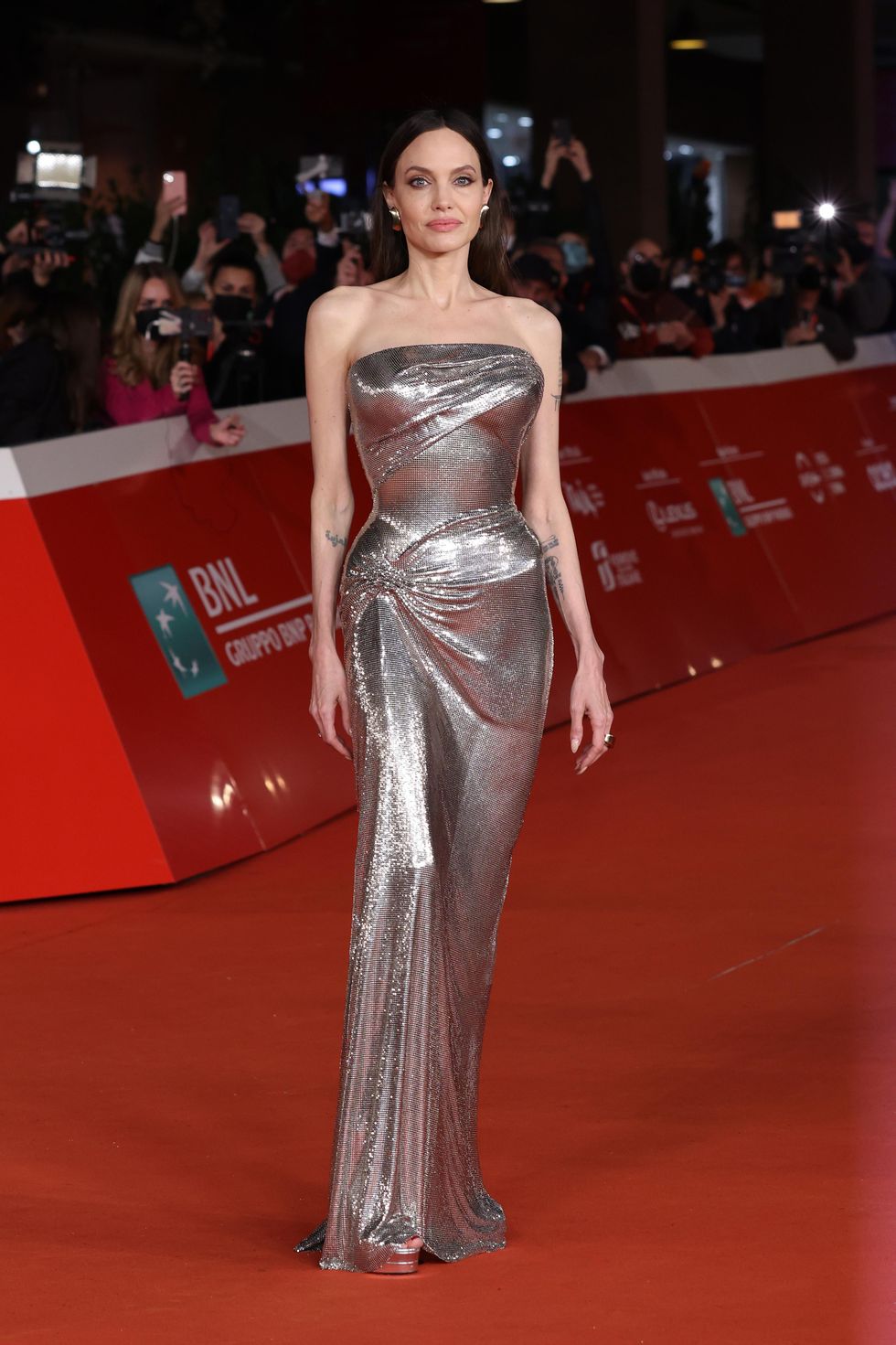 Hair extension debacle aside, Angelina Jolie’s welcome return to the red carpet was done with a bang in this stunning, sculptural Versace platinum silver column gown with a cinched and draped waist to boot.

Garcelle proved to be the Real Housewives of Beverly Hills’s best dressed in this stunning Monique Lhuillier sequin illusion gown for the show’s reunion. Opulence perfected. 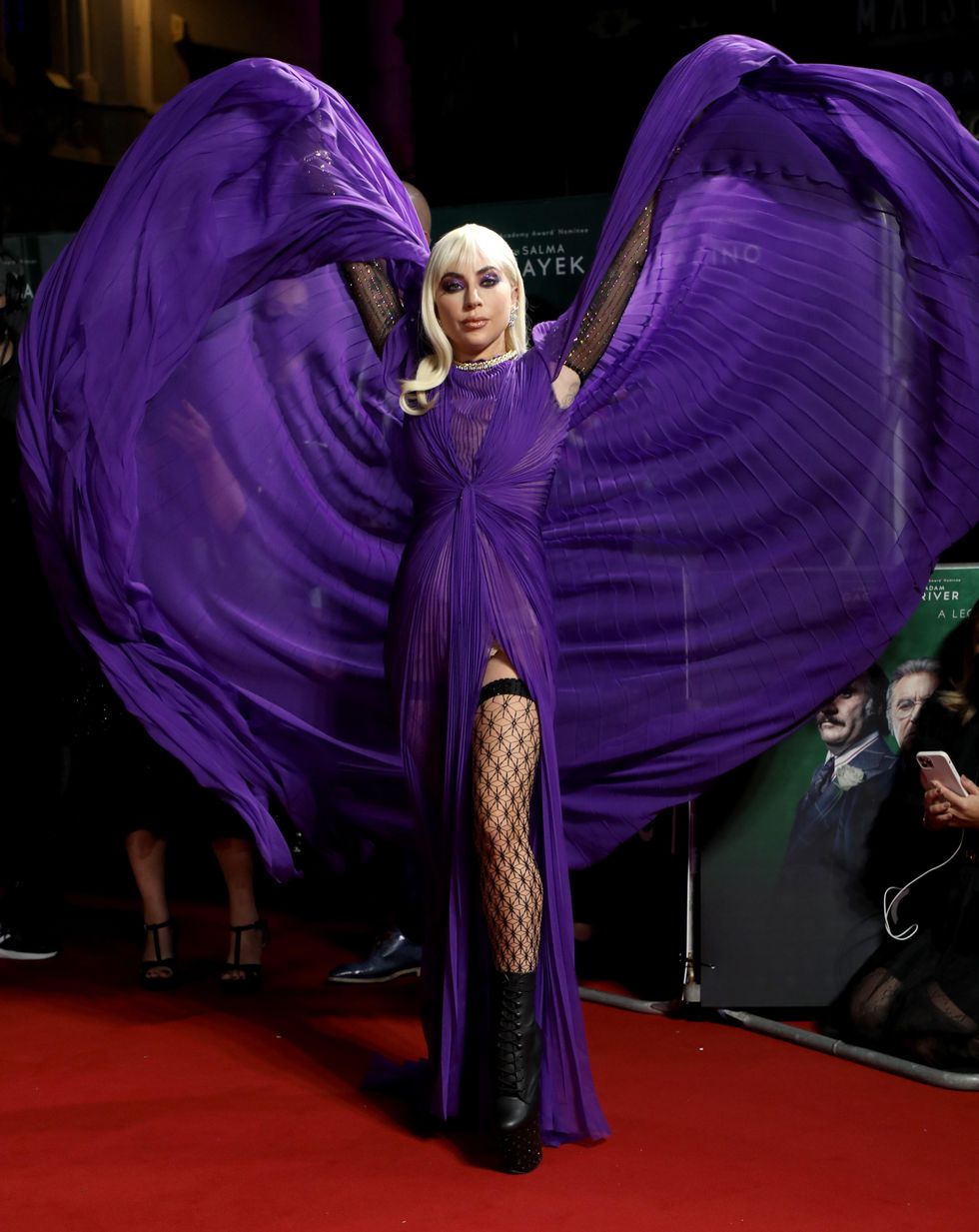 You didn’t think we’d forgotten about her, did you? Though she gave us many a street style look, from Valentino to Christopher John Rogers, her top toot of the year has to be the purple chiffon Gucci Spring 2022 gown that she wore to the House of Gucci world premiere. Gucci for Gucci? Groundbreaking. When you look this good in it, it ironically just is. 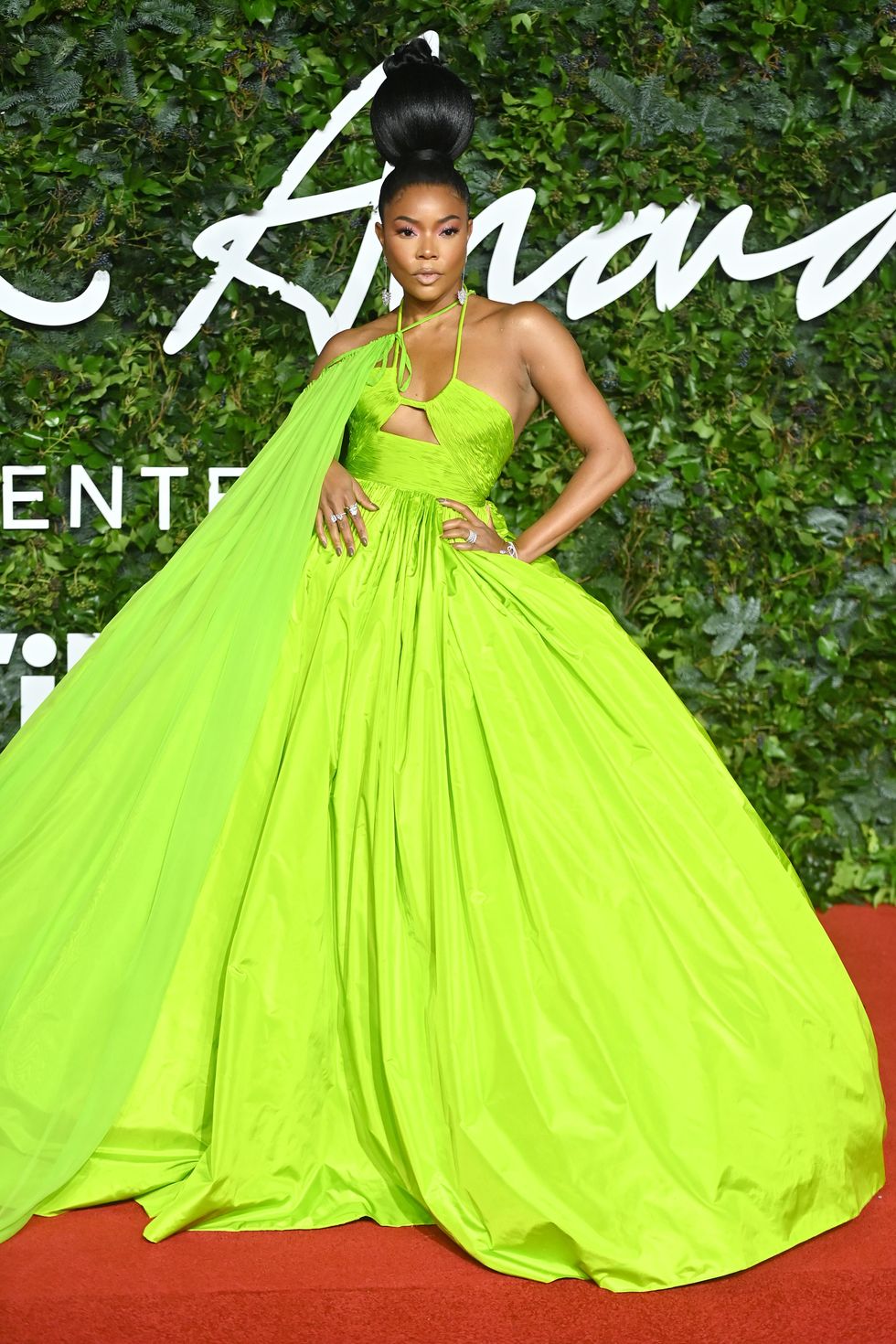 Unapologetic glamour and joy was the goal, and they — Gabrielle Union and stylist Thomas Christos Kikis — succeeded in spades. This neon Valentino Haute Couture look, which Union wore at the Fashion Awards, is the ultimate proof that maximalism is nothing to fear. 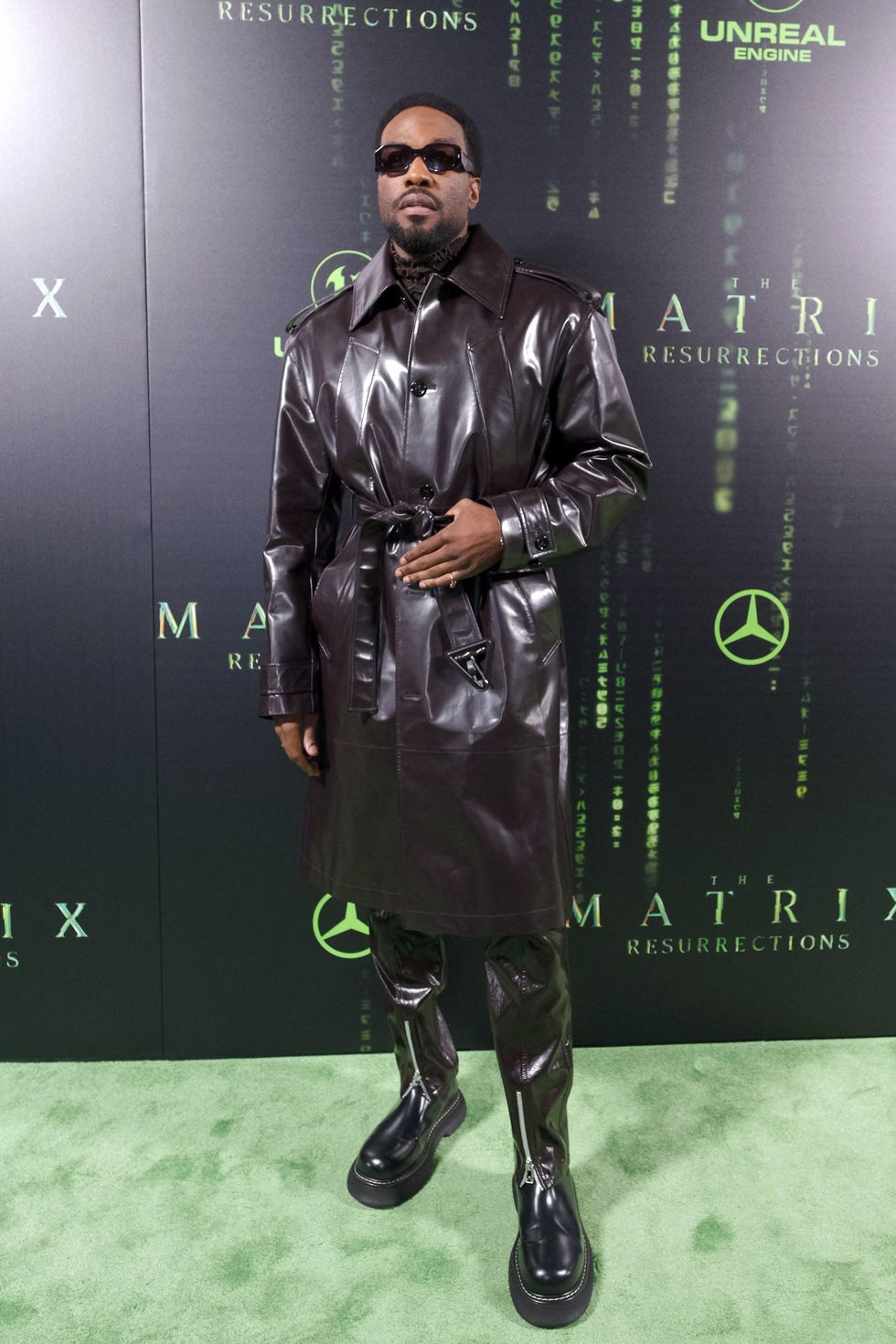 When the material is this good — the man and the brand (Bottega Veneta) — it’s hard to miss, so it’s no surprise to see Yahya close out the list in an ensemble that commands attention in attendance at the premiere of The Matrix Resurrections. Special shout out to that cinched waist.