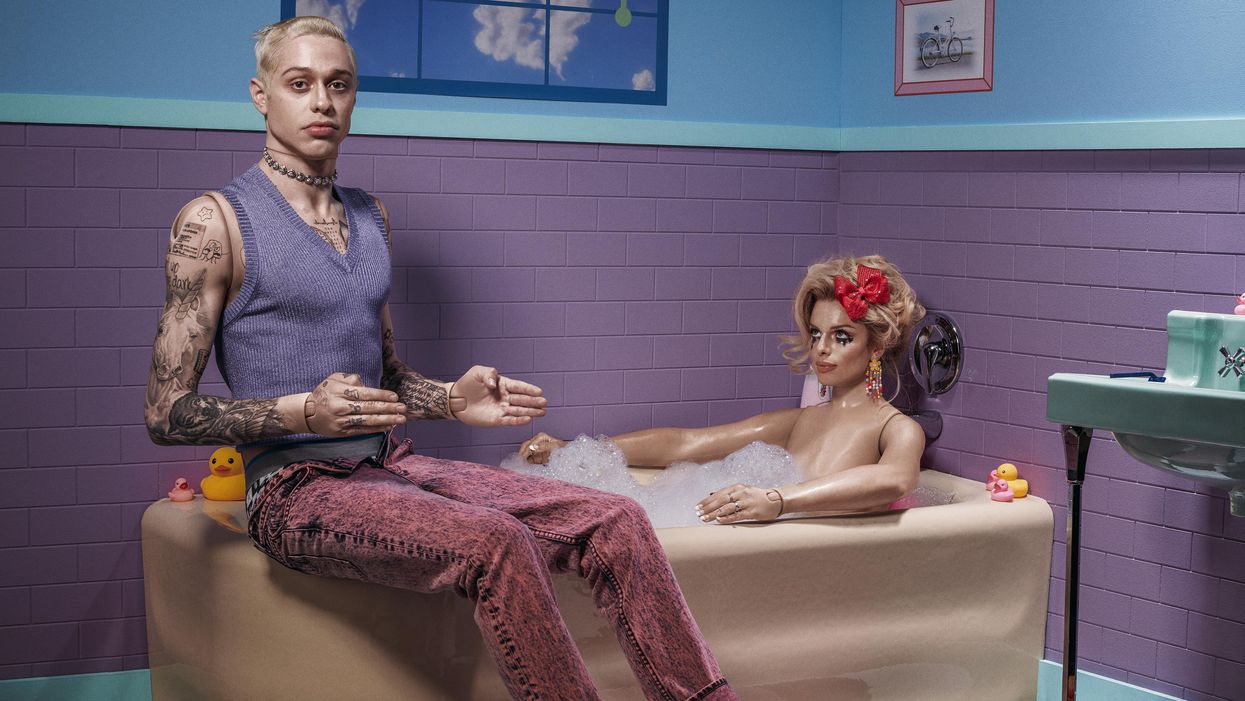 Kanye has announced his Gap x Yeezy x Balenciaga collaboration following confirmation of his courtship with Julia Fox, who has mostly been wearing Balenciaga on their outings. Of course, Kim Kardashian — most recently seen jetting around with Pete Davidson while accumulating a decent number of career milestones — has been wearing Balenciaga for months. In a coy piece for Interview about the new relationship, Fox confirmed that she had been styled by Kanye for their dates, just as Kardashian had been for years.

The plot of an already epic public performance of divorce has thickened.

After all, as Patrik Sandberg pointed out on Twitter, Balenciaga has been outfitting pretty much every scene of Kimye’s apparent efforts at an iconic uncoupling.

The jarring combined optics of Fox and West’s casual paparazzi shots with their posed images for Interview obviously raise one avenue of questions: does Kanye have a “new” muse? Are muses really replaceable? What does it mean to be a “muse,” anyway?

Then we recall a series of connections screaming to be decoded: West and Davidson have hung out before, Fox once modeled for a SKIMS social media campaign, and West once utilized paparazzi photos (featuring Kardashian and a bunch of others styled to be her lookalikes) for a Yeezy campaign.

There is, of course, the additional link of PAPER’s very own 2019 “Break the Internet” cover, which depicted Davidson and Fox as Ken and Barbie dolls. One thing is clear: all these people knew one another long before romantic entanglements began; and, in the case of Yeezy, the media landscape itself has already served as backdrop for a new kind of product placement.

So did PAPER’s feature accidentally anticipate the roles Fox and Davidson would go on to play for two of media’s most effective entertainers? Barbie dolls are known to fulfill two functions: Companionship and blank-slate bodies for games of “dress up.” After all, Davidson has already been photographed in SKIMS, and now Fox is donning the designer oft-associated with Kimye. Would it be a conspiratorial, cynical, or merely critical thought to consider that these costumed media events are, in fact, curated?

Marketing beyond the runway is nothing new. Barbie, the doll herself, has been dressed by designers from Oscar de La Renta to Christian Dior to Alexander McQueen. Plus, luxury fashion observes a long tradition of collaborating with cinema’s greatest directors and actors; it’s an artful approach to product placement that simultaneously elevates the films and further mythologizes the brands. In 1967, Yves Saint Laurent tailored Catherine Deneuve’s suits for her “fragile and seductive” depiction of Severine in cult-classic Belle de Jour.

“Another example is Givenchy doing Audrey Hepburn’s films,” Iolo Lewis Edwards of High Fashion Talk tells me. “And a more recent one is Chanel doing Spencer.” One of my TikTok followers, Dedric Mandel, also pointed out that Prada provided wardrobe for Baz Luhrmann’s luxe take on The Great Gatsby. There’s something about being dressed by a great designer that graduates a story’s more basic characters into influential “icons.” Legend has it, after all, that trench coat sales went up following Belle de Jour’s release.

These kinds of collabs are mutually beneficial. That fun trench coat “fact” is now often included in YSL lore. Fashion in film can help to affirm the legacy of couture, which might otherwise risk withering within its increasingly outdated “Ivory Tower.” In a conversation with Grazia d’Annunzio for NYU, fashion historian Valerie Steele said: “Fashion goes up and down. There’s a long-term self-rule for luxury. A lot of these companies plant their flag on ‘heritage, luxury,’” and the idea that “history continues with us.”

Both designer and director are driven by a common goal: harnessing the power of story to engage audiences — thereby blurring lines between audience and consumer — and ensure posterity.

Stories make this possible; they evoke emotion. Emotions bolster memory and amplify attachment. In a well-known Ted Talk about the power of storytelling in marketing, David JP Phillips identifies three hormones that well-told stories can induce in humans: dopamine, oxytocin and endorphins. He calls this triad the “devil’s cocktail.” This is partly the reason Keeping Up with the Kardashians was so successful despite its divisiveness; it was a collection of well-structured stories about a family. Stories that also happened to be 45-minute-long commercials for Kar-Jenner products. More blurred lines.

Apparently media has mixed a new devil’s cocktail in the form of tastemaker Kanye, muse-cum-mogul Kim, “It Boy” Pete, and artsy bombshell Julia. They’re telling a tale as old as time: heartbreak, rebounds, honeymoon phases. They’re employing an age-old writing rule: show, don’t tell (for the most part). One element, however, is different. The medium.

At first, Americans consumed media primarily through print, then radio, then movies and TV (especially: reality TV), and now social media. Though no singular form of media wholly replaces the one that precedes it, the latest technology trends do tend to take over. The controversial presence of influencers at the 2020 Met Gala opened a conversation about whether the cool kids of social media will constitute our next wave of celebrities. And let’s not forget that it was TikTok where Gen-Z trended the concept of “main character moments,” reminding us that the aforementioned power of story transcends books and movies, persisting even in a social media-centered era. What I’m trying to say is: a mosaic of media stories being told through musical concerts, Instagram posts, sound bites from radio interviews, posed Paparazzi shots and curated press releases framed as confessionals might be replacing good ole fashioned movies and TV.

Where might that leave fashion and its notorious attraction to narrative?

From a successful collaboration with Fortnite in 2020 to the 10-minute Simpsons short featured at Paris Fashion Week to jokes about The Metaverse with Mark Zuckerberg, Balenciaga creative director (and West’s close friend) Demna has demonstrated deftness at keeping up with the demands of digital culture.

That’s why this collaboration makes perfect sense. Why shouldn’t Demna and Ye’s collaborative campaign be barely indistinguishable from tabloid (and social) media itself?

This postmodern approach has been brewing for a while, but I’d argue that Kimye’s direct application of it began with the end of Keeping Up with the Kardashians and the beginning of the Donda promotional events (for which, of course, Kanye wore Yeezy Gap).

Kardashian and West, forever living out Main Character Moments, knew they would not need traditional structures like a show or an album to continue telling compelling stories. At the first Donda event, Kimye teased tabloids by matching in red, blurring lines between reality TV and theater, raising questions without providing answers. The final Donda event: Kim wore a Balenciaga wedding gown and “married” Kanye again in a baffling scene that goaded the public to keep guessing.

Kimye, most powerful as a team, perform their complicated relationship with one another in a new-media style of branded storytelling that we may understand better once we can examine it retroactively. Whatever it is, would Balenciaga dressing this media experiment really be so different from classic collaborations between great designers and cinema directors?

And is it really a surprise that Balenciaga is partnering with Yeezy and GAP, enabling more accessibility to a wider market, just as Kardashian recently did with SKIMS and Fendi? Doesn’t this uncover a certain marketing convenience to Kimye’s romantic partnerships? Both Davidson and Fox offer alternative, accessible appeal, bringing two media moguls back down to earth just in time for collaborations intended to blur lines between the “high end” and the every day.

In a way, not much has changed. We may be scandalized that classic “confused ex” West is finally rebounding with a rising star, but Kardashian is still positioned as his original muse, the first one to wear Balenciaga before we discovered it would be accessible. Even if their courtship is in earnest, Fox inherently represents West’s next phase of messaging: everyone can have their “Cinderella story” once Balenciaga x Yeezy hits GAP shelves. Kardashian ruled the Yeezy Season 6 campaign, and she continues to rule this one. I personally don’t believe we have seen the end of Kimye’s quiet collaboration.

Related | Kanye West: In His Own Words

Still, there is a reason we’re all so affected by what should probably be forgettable photos of fancy people’s rebound flings. Kimye had always seemed like a marriage of the curated and the chaotic; a line that appears to be blurring as their union dissolves (for now).

This uncanny series of events is a resonant reflection of the hyperreal condition of modern media. The lines between advertising and “real life” blur more by the day. This is why I am glad West has disclosed the Balenciaga deal so quickly. Consumers are entitled to transparency about promotional marketing.

In any event: our questions about Davidson and Fox aren’t actually about whether or not their romances with Kardashian and West are for real. What we’re really wondering is why the word “real” increasingly comes encased by quotation marks, and whether there’s a line at all between who Davidson and Fox were when they broke the Internet together in 2019 and where they are today.